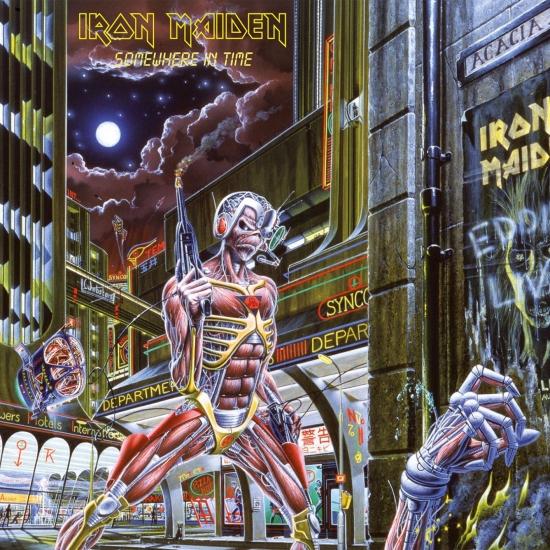 Info for Somewhere In Time (2015 Remaster)

Iron Maiden's 1986 „Somewhere In Time“ contains more than a few highlights, such as the ferocious album opener, "Caught Somewhere in Time," as well as softer singles "Wasted Years" and "Stranger in a Strange Land." And as with the band's preceding studio release, „Powerslave“, another masterful composition closes the album, in this case the sprawling "Alexander the Great." Departing from the familiar sounds of stellar earlier releases like „The Number Of The Beast“ and „Piece Of Mind“, this album explores new musical territory with the addition of synthesizers, while maintaining its trademarks--galloping bass, heavy guitar riffs, and operatic vocals. Though there were some doubts initially, the addition of synthesizers didn't alienate the band's headbanging following. In fact, the change, along with this album's commercial success, was a clear indication of the band's musical progress.
Bruce Dickinson, vocals
Dave Murray, guitar, guitar synthesizer
Adrian Smith, guitar, guitar synthesizer, backing vocals
Steve Harris, bass, bass synthesizer
Nicko McBrain, drums