A Matter Of Life And Death (2015 Remaster) Iron Maiden 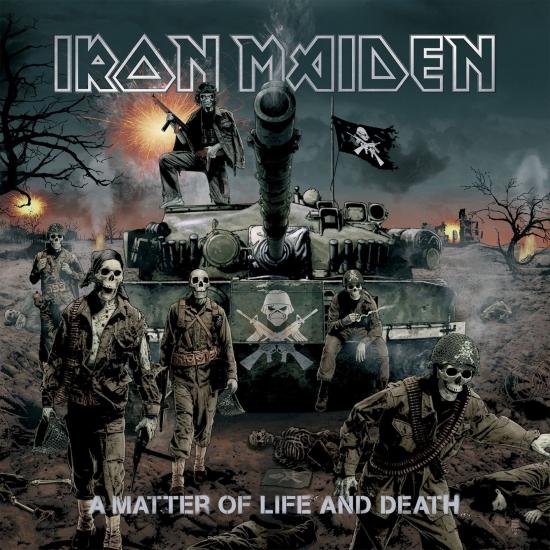 Info for A Matter Of Life And Death (2015 Remaster)

Like all the best metal bands, Iron Maiden has never shied away from grandiosity in both material and presentation--'Rime of the Ancient Mariner,' anyone?--and „A Matter Of Life And Death“ follows in this same bigger-is-better tradition. From the cover art depicting tanks and skeletal soldiers to standout tracks like 'These Colors Don't Run' and 'For the Greater Good of God,' „A Matter Of Life And Death“ finds these elder statesmen of metal simultaneously reveling in and protesting the horrors of modern warfare and the irony of holy war. Bruce Dickinson proves once again that he is one of metal's greatest vocalists, and Kevin Shirley's no-frills production keeps the focus on the band's trademark guitar interplay. The mood is somber, but the riffs kill and the refreshingly strict 4/4 tempos keep the band close to the script that made them metal legends.
„2003's Dance of Death marked the triumphant return of old-school Iron Maiden. Gone were the murky, over-produced set pieces that clogged 2000's Brave New World and in their place fell blistering slabs of Piece of Mind-era metal. That trend continues with their 14th full-length album, Matter of Life and Death, a more elaborate and meandering experience than Dance of Death, but a rewarding one for fans willing to indulge the group's occasional excess. At over 70 minutes, Matter of Life and Death is closer to 1988's woefully underrated Seventh Son of a Seventh Son than it is to Piece of Mind, but with far less keyboard tickling. Recorded live in the studio, epics like 'Reincarnation of Benjamin Breeg,' 'Brighter Than a Thousand Suns,' and the brutal 'Longest Day' -- the whole record is a loosely-knit song cycle with war at its core -- exhume prog rock complexity and discipline yet manage to bristle with the kind of small-club intensity usually reserved for acts half their age. At just over four minutes, opener 'Different World' -- a near twin of Dance of Death's 'Wildest Dreams' -- is the only cut that screams single, but it's also the most misplaced. On a record that positions beloved avatar Eddy on top of a tank with a machine gun leading a weary troop of skeletal soldiers to their doom, any act of brevity, no matter how expertly crafted, sticks out like a saxophone solo.“ (James Christopher Monger, AMG)
Bruce Dickinson, vocals
Dave Murray, guitar, guitar synthesizer
Adrian Smith, guitar
Janick Gers, guitar
Steve Harris, bass, keyboards
Nicko McBrain, drums
Recorded March - May 2006 at Sarm West Studios, London
Engineered and mixed by Kevin Shirley
Produced by Kevin Shirley, Steve Harris
Digitally remastered