The Number Of The Beast (2015 Remaster) Iron Maiden 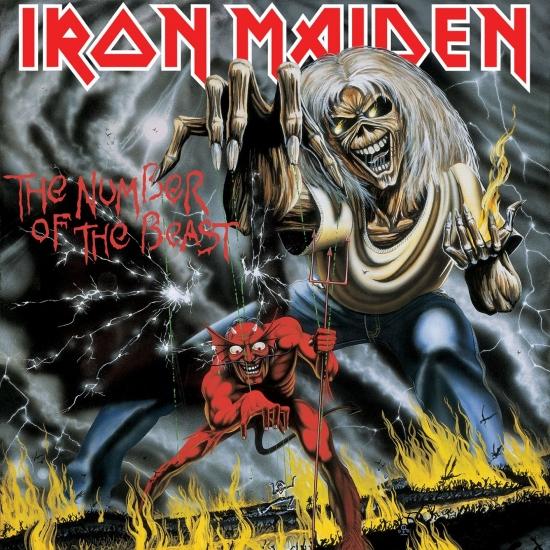 Info for The Number Of The Beast (2015 Remaster)

Throughout the 1980s, a damning generalization held true: British metal was essentially working man's food, loosely descended from biker-meets and Northern pubs; whereas, in the States, it was an outgrowth of stadium rock, which traditionally subordinated substance to spectacle. Plug-ugly and cartoonishly morbid, Iron Maiden were typical of the Brit effort, since they effectively emphasized a driving, no-nonsense approach to the music. Among metal aficionados, this album ranks as one of the defining moments of the entire genre. Of the nine songs here--including Maiden classics like 'Run to the Hills' and the title track--only 'Gangland' falls flat, though it's immediately overshadowed by 'Hallowed Be Thy Name,' acknowledged by many as this band's apotheosis.
„Given the importance people attach to the role of the vocalist in rock groups, the upward curve that Iron Maiden had steadily enjoyed since their first album in 1980 might well have become a downward spiral with the departure of singer Paul Di’Anno. Echoing Spinal Tap’s legendary problems in keeping their drummers, he was already the third singer since their humble beginnings as a pub band. His leaving as the band stood on the cusp of global success turned out to be fourth time lucky for them. And for ex-Samson vocalist Bruce Dickinson, whose sand-papered soaring yowl more than held its own against the blasting and frequently bombastic arrangements. His debut with the band gave them their first No.1 album in the UK and broke them in America. As the title not-so-cunningly implies, there’s the prerequisite dollop of occult-orientated subject matter that you’d expect. What is surprising however is the extent to which their combination of sophisticated arrangements and varied tonal palette lifts what might otherwise be a rather earthbound (i.e. bog-standard) set. The frantic opener, “Invader” flirts intriguingly with jazz-rock fusion whilst other tracks have an overtly prog-rock agenda.
Certainly, a key weapon of bassist Steve Harris, the album’s main writer, is the convincing use of multi-movement compositions. Whereas even some of the venerable HM institutions (think Black Sabbath) would struggle to make material that was something more than a collection of minor-key riffs, Iron Maiden pull this feat off with considerable élan. “The Prisoner”, (complete with dialogue lifted from the TV series of the same name) could almost pass for a heavy-metal Genesis and even the innuendo-laden “22 Acacia Avenue” has some complex riffing that wouldn’t be out of place in Gentle Giant.
The greater emphasis on dramatic narrative (the title track, “Hallowed Be Thy Name” and the top ten single, “Run To The Hills”) provide Dickinson a platform to showcase some subtle phrasing that marks him out as a cut above the rest of the balls-to-the-wall competition. Maiden newbies are advised to start their journey to metal hell and back right here.“ (Sid Smith, BBC Review)
Ranked #100 in Q's '100 Greatest British Albums' - '...A hook-ridden, overdriven brew of Norsemen, Red Indians and, of course, Satanism, it epitomised British metal's values system...'
(p.51) - 'Richer, more streamlined and measurably more melodic than its punkier predecessors, BEAST expanded Maiden's musical horizons...' (Kerrang Magazine)
Bruce Dickinson, vocals
Dave Murray, guitar
Adrian Smith, guitar
Steve Harris, basss
Clive Burr, drums