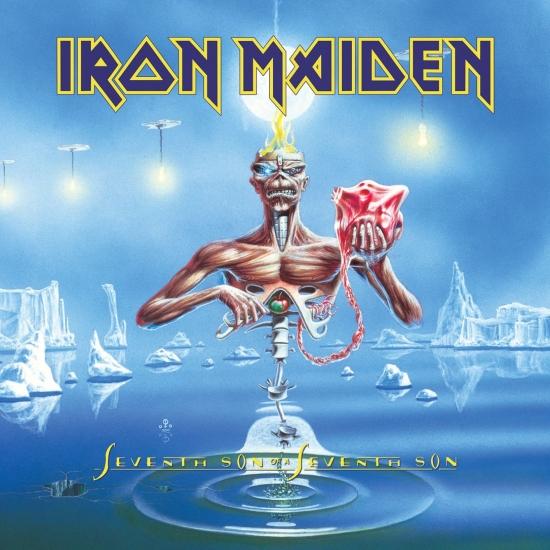 On „Seventh Son Of A Seventh Son“, the songs tell the tale of a young prophet who predicts the destruction of his village, and is ignored when he tries to warn the others. Eventually, the man goes mad and commits suicide. Employing synthesizers, Iron Maiden takes a two-fold risk: with the music and by doing a concept album. This formula might have spelled disaster for most bands, but not Iron Maiden. „Seventh Son Of A Seventh Son“ turned out to be one of the band's strongest releases, debuting in the U.K. charts at Number One, and spawning four Top-10 singles ('Can I Play With Madness,' 'The Evil That Men Do,' 'The Prophecy,' and 'Infinite Dreams'). The band's popularity had reached an all-time high around this time, as Maiden headlined the 1988 Monsters of Rock concert at England's Castle Donnington. During the single-day event, Iron Maiden played to a record 100,000 fans, headlining over such big names as Kiss, David Lee Roth, Guns N' Roses, and Megadeth.
„Seventh Son of a Seventh Son is the last great Iron Maiden album, reconnecting with the band's prog rock roots and reversing the signs of decline that had been evident on their previous record. By this point, Maiden had earned the respect of metalheads the world over with their steadfast adherence to unadulterated metal and their grandiose aesthetic. They'd made concessions neither to pop-metal nor to thrash, and their passionate fan base would never have tolerated a radical reinvention. But what do you do when your epic ambition itself has become a formula? You go even bigger and make a concept album, of course, and that's what Maiden does here, breaking out of the creative rut they'd fallen into on Somewhere in Time. The concept is based on the European folklore which held that the seventh son of a seventh son would be born with special powers that could be used for good or evil (and probably also in part by fantasy author Orson Scott Card, who'd touched on this idea in his own work). As such, the lyrics are Maiden at their most gothic, obsessed with supernatural mysticism of all stripes; the story line concerns the title character, born with a gift for prophecy but mistrusted by his village, which ignores his warnings of apocalyptic doom and makes him a tormented Cassandra figure. Musically, this is Maiden at their proggiest, with abrupt, stop-on-a-dime transitions between riffs, tempos, time signatures, and song sections. Yet nearly every song has a memorable chorus, with only 'The Prophecy' falling short in that department. They've also switched from the guitar synths of Somewhere in Time to full-fledged keyboards, which are used here more to add atmosphere rather than taking center stage; this restores the crunch that was sometimes lacking in the shinier production of the previous album. No less than four of this album's eight songs reached the British Top Ten in some version (concert standard 'Can I Play with Madness,' 'The Evil That Men Do,' 'The Clairvoyant,' and 'Infinite Dreams'), while the album became the band's first U.K. chart-topper since The Number of the Beast. The title track is this album's extended epic (though the songs are longer in general), and it's moved out of the closing spot in yet another subtle statement about shaking things up. If Seventh Son doesn't epitomize their sound or define an era the way the first three Dickinson albums did, it nonetheless ranks among their best work. Adrian Smith left the band after this record, closing the book on Maiden's classic period and heralding a dire -- and distressingly immediate -- creative decline.“ (Steve Huey, AMG)
Bruce Dickinson, vocals
Dave Murray, guitar
Adrian Smith, guitar
Steve Harris, bass, string synthesiser
Nicko McBrain, drums