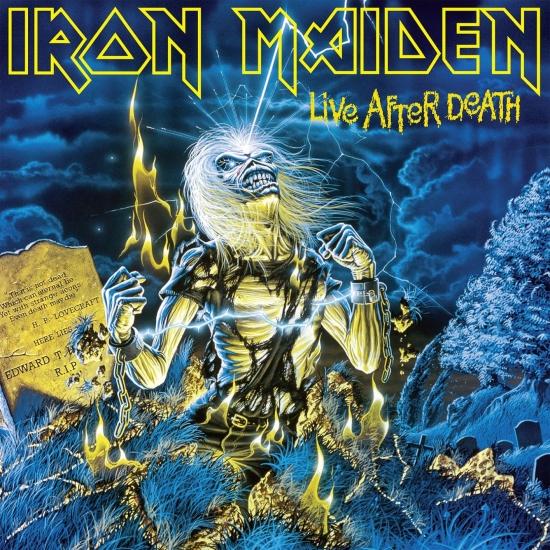 Info for Live After Death (2015 Remaster)

Along with Kiss's ALIVE!, Ozzy Osbourne's TRIBUTE, and Thin Lizzy's LIVE AND DANGEROUS, Iron Maiden's 1985 double-disc set LIVE AFTER DEATH ranks among the greatest heavy metal live albums. Most of the performances were recorded during an unprecedented quartet of shows at the Long Beach Arena in Los Angeles, CA, while several other tracks are from an earlier run of gigs in London's Hammersmith Odeon.
Only Maiden's very best songs are included, and the performances are consistently inspired. Such popular favorites as 'Aces High,' '2 Minutes to Midnight,' 'The Trooper,' 'Flight of Icarus,' 'The Number of the Beast,' 'Run to the Hills,' 'Running Free,' and 'Wrathchild' are included. But as longtime fans know, Maiden has always been an album-oriented band, and many of the band's greatest tracks were not singles, as evidenced by such lesser-known items as the 13-minute epic 'Rime of the Ancient Mariner,' 'Powerslave,' 'Revelations,' '22 Acacia Avenue,' 'Children of the Damned,' and 'Phantom of the Opera.'
„Iron Maiden's World Slavery Tour was one of the longest and most extensive tours ever undertaken by a rock band. Lasting from August 9, 1984, to July 5, 1985, and visiting such countries as Poland, Austria, Hungry, Yugoslavia, Italy, France, Spain, Portugal, Scotland, England, Germany, Sweden, Canada, Japan, and the U.S., the show included a mammoth setup that replicated the intricate ancient Egyptian scenery of the Powerslave album cover. As a 'thank you' to the hundreds of thousands of fans who packed arenas the world over, the double-disc live set Live After Death was issued in 1985. Disc one is comprised of selections from a four-night stand at L.A.'s Long Beach Arena, with disc two comprised of performances from London's Hammersmith Odeon. The album is essentially a best-of of sorts, since most of their singles released up to this point are featured in all of their high-decibel glory: 'Aces High,' '2 Minutes to Midnight,' 'The Trooper,' 'Flight of Icarus,' 'The Number of the Beast,' 'Run to the Hills,' and 'Running Free.' Also included are such strong album tracks as 'Wrathchild,' '22 Acacia Avenue,' 'Children of the Damned,' 'Phantom of the Opera,' 'Hallowed Be Thy Name,' 'Iron Maiden,' plus their two epics, 'Powerslave' and 'Rime of the Ancient Mariner,' making it a near-complete overview. Live After Death is easily one of heavy metal's best live albums.“ (Greg Prato, AMG)
Bruce Dickinson, vocals
Dave Murray, guitar
Adrian Smith, guitar, backing vocals
Steve Harris, bass, backing vocals
Nicko McBrain, drums

Recorded live at the Long Beach Arena, Los Angeles, California in 1985 and at The Hammersmith Odeon, London, United Kingdom in October 1985
Engineered and mixed by Martin Birch
Produced by Martin Birch
Digitally remastered