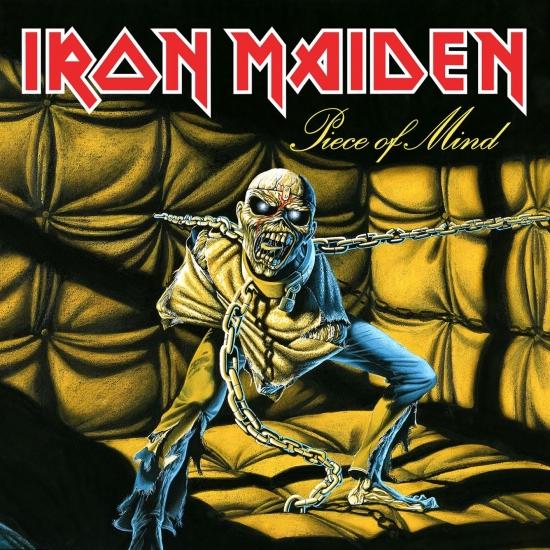 „Piece Of Mind“ is the release cemented Iron Maiden firmly in the 1980s, making it one of the decade's most successful and enduring metal bands. This album includes such standards as the soaring 'Flight of Icarus' and the barnstorming war tale 'The Trooper.' While the band had dabbled with epics on previous albums, „Piece Of Mind“ was the first to feature several complex tunes, like the album-opening 'Where Eagles Dare,' the contemplative 'Revelations,' and the album-closing 'To Tame a Land,' the last of which was inspired by the sci-fi novel series Dune, by Frank Herbert. Personnel changes on this album include ex-Trust/Pat Travers drummer Nicko McBrain who took over for Clive Burr, but that shakeup did not hamper the success of „Piece Of Mind“ which, in keeping with Maiden's streak of hit releases, is another classic album.
„The second of three straight iconic Iron Maiden albums, Piece of Mind marks the debut of what many regard as the definitive Maiden lineup, with the arrival of new drummer Nicko McBrain. McBrain's ability to duplicate the complex patterns of the guitar and bass riffs gives the band a seamless ensemble unity. Even Steve Harris, whose busy basslines were never exactly groove-oriented, has never felt more integrated into the overall sound. Perhaps part of that feeling comes from the less frantic pace; the average tempo has slowed somewhat from the preceding album, and the hold-over punk influences still present there have been completely eradicated. Instead, we get a few moodier, heavier pieces (especially 'Revelations') that make the album darker-sounding overall. We also get greater involvement in the songwriting from Bruce Dickinson and Adrian Smith, whose themes are perfectly in tune with Steve Harris' epic storytelling. Nearly every song here was inspired by movies or literature, whether it's history, mythology, sci-fi, or fantasy; this approach got them tagged as a thinking-man's metal band, and certainly provided a lyrical blueprint for Anthrax. No less than four songs are about battles and warriors, and a couple are about flying, underscoring the heights of the drama that the band is aiming for. The centerpiece of the album is, of course, 'The Trooper,' an all-time genre classic that boasts Murray and Smith's most memorable harmonized lead riff, plus that trademark galloping rhythm. A retelling of the Greek myth 'Flight of Icarus' was the other British hit single, boasting an appropriately soaring chorus. Album opener 'Where Eagles Dare' is the other flight song, recounting a WWII spy thriller and featuring one of McBrain's signature performances with the band. If much of Piece of Mind ranks as state-of-the-art heavy metal, it is true that the second half dips a bit from the first. 'Quest for Fire' is many a die-hard fan's least favorite track from the glory years; the melody is rather stiff and simple, and the lyrics are about cavemen, rendering Dickinson's operatics ('In a tiiiiiime when dinosaurs walked the eaaaaaarth') a bit ridiculous. Among the serious-minded Maiden faithful, there's no less forgivable sin than silliness (no matter how entertaining it might be). Fans also bemoan the relative simplicity of the samurai tale 'Sun and Steel.' However, the album closes on a big, progressive note with 'To Tame a Land,' an epic retelling of Frank Herbert's Dune that evokes the desert planet via Middle Eastern guitar melodies. In the end, even if Piece of Mind is the most obviously inconsistent of the classic Maiden trilogy, its many high points are no less awe-inspiring, and it's no less essential for anyone with even the most basic interest in heavy metal.“ (Steve Huey, AMG)
Bruce Dickinson, vocals
Dave Murray, guitar
Adrian Smith, guitar, backing vocals
Steve Harris, bass, backing vocals
Nicko McBrain, drums