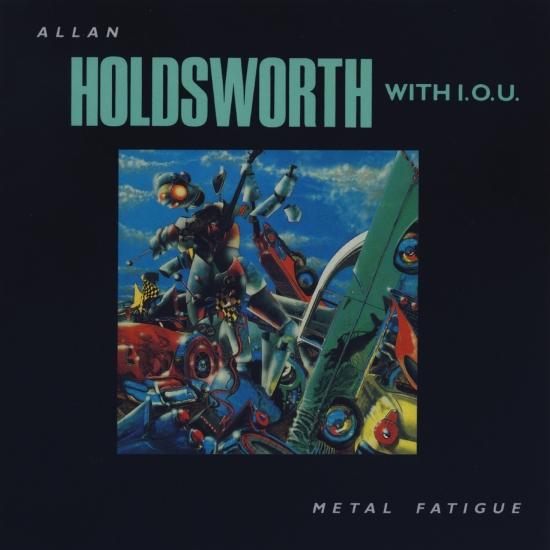 Metal Fatigue is the third studio album by guitarist Allan Holdsworth, released in 1985: Allan Holdsworth is among the most elusive and enigmatic of guitar heroes: as important to rockers such as Eddie Van Halen and Steve Vai as he is to renegade electric jazzmen like Frank Zappa and Dave Fiuczynski. Yet for all his overwhelming technical command, his albums have been wildly uneven. On Metal Fatigue's title track and "In the Mystery," Holdsworth's sensual chordal backdrops and bold, expansive rhythmic changes are mitigated by sappy "If I Were King of the Forest," vocals, a pointless nod to the faux song-form posturings of progressive rock bands, which are meant to justify all the "musicianship" but serve only to steer listeners away from some rip-roaring solos. Still, if you can filter out the odd bits, Metal Fatigue offers a bite-sized freeze-frame of Holdsworth's essential artistry. Holdsworth's digitally delayed chordal raindrops on "Home" serve as a churchy backdrop for some simple, expressive acoustic guitar. But for devout pilgrims, Holdsworth's anthemic solo on "Devil" is the full monty. Holdsworth's canny use of whang-bar vibrato and rapid hammer-on effects give his fleet, soaring lines a horn-like aura that transcends the instrument itself, bordering on the realm of pure speech and song.
"Criminally unknown and underappreciated, Allan Holdsworth is one of the greatest musicians ever to pick up the electric guitar. Here, on 1985's Metal Fatigue, everything finally comes together for him. For the majority of this record, Holdsworth is joined by bassist Jimmy Johnson and drummer Chad Wackerman, and these two musicians, virtuosos in their own right, complement Holdsworth beautifully (check out Johnson's wonderful part in "Home" and lovely solo on "Panic Station"). The leader is known for his extremely legato phrasing and rich harmonic vocabulary, both of which are on display in the solo and frantic fills of "Metal Fatigue." Anchored by Paul Williams' vocals, the song is marvelously constructed, with a strong verse melody supported by Holdsworth's upper-register guitar chords. The guitarist's much-vaunted whammy bar work is also on full display here. Certain fills in "Metal Fatigue" are almost queasy sounding, as Holdsworth bends and slurs in impossible ways. His use of the tremolo bar comes out not only during his melodic playing, but also during his rhythm playing, where he allows his chords just a trace of shimmer, enough to lend body to his playing but not enough to blur the harmonies. The influence of Holdsworth's unique style is evident in the work of such rock guitarists as Eddie Van Halen and Alex Lifeson (listen to VH's "Drop Dead Legs" or Rush's "YYZ" for a taste of this connection), but the watered-down and otherwise assimilated adaptations of his style pale compared to the unadulterated stuff. One of the most important fusion records of the '80s is also Holdsworth's best work. Absolutely essential for those who like their rock with a healthy dose of jazz." (Daniel Gioffre, AMG)
Allan Holdsworth, guitar
Paul Williams, vocals (tracks 1, 4)
Paul Korda, vocals (track 6)
Alan Pasqua, keyboards
Chad Wackerman, drums (except tracks 5, 6)
Gary Husband, drums (track 5)
"Mac Hine", drum machine (track 6)
Jimmy Johnson, bass (except track 5)
Gary Willis, bass (track 5)
Digitally remastered
Please Note: We offer this album in its native sampling rate of 48 kHz, 24-bit. The provided 96 kHz version was up-sampled and offers no audible value!