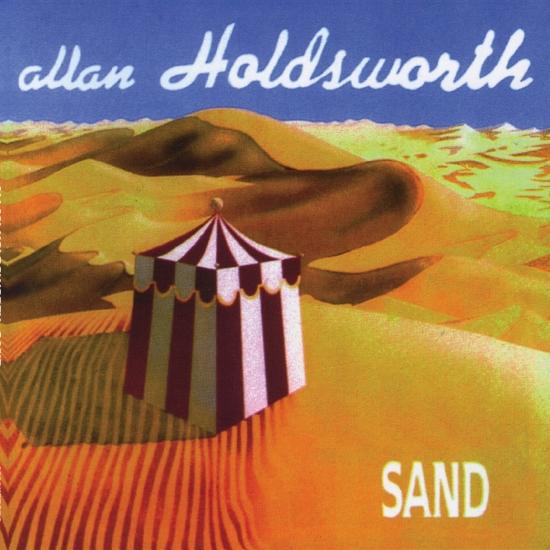 Sand is the fifth studio album by guitarist Allan Holdsworth, released in 1987.
"Brit guitar hero Allan Holdsworth, ex of the Soft Machine, Gong, U.K., and Bill Bruford and Annette Peacock's solo projects, has been wildly inconsistent when it comes to his solo projects. Completely bonkers for technology, he's employed every gadget he can get his hands on own records, and has gotten results that range from the near sublime to the kind of dross one usually associates with prog excess. But Sand is a different animal, a respite from the relentless kitchen sink approach Holdsworth was mired in through much of the late '70s and early '80s. Utilizing a new contraption, the "Synthaxe," a guitar that has the tonal and sonic possibilities of the synthesizer but can be played straight as well, it seems to satisfy the artist's technology jones, and allows him to compose sensitively for the instrument while not forgetting he's a guitarist first. Guitar fans might be a little put off by the sounds and textures of the synthaxe, which allows for a guitarist to subvert its limited range of tones and colors for rounded off keyboard sounds and warm textural aspects. In other words, the traditional sound of the electric guitar -- and, in particular, Holdsworth's trademark sound -- is nearly absent. In place is a near keyboard sound played in the same way he plays guitar. The six compositions here range from the knotty, mixed tempo, arpeggio-rich title track to the reflective, near pastoral grace of "Distance Vs. Desire" to the electronically astute, fast and furious jazz-rock fusion of "Mac Man." The only time a keyboard actually appears is Alan Pasqua's solo in "Pud Wud," where the guitarist wields his traditional instrument and rips free of the constraints of his own composition for some truly fiery pyrotechnics. The rhythm section of bassist Jimmy Johnson (a killer electric jazz bassist who has also played with Percy Jones and Brand X) and drummer Gary Husband are more than equal to the task of accompaniment, and, in fact, are creative foils for Holdsworth, who allows his sidemen plenty of room to shine -- also unlike many of his earlier projects. Is Sand the mark of a new contentment and refined aesthetic for Holdsworth? Only time will, but it is safe to say that this is one of his most innovative and texturally beautiful to date." (Thom Jurek, AMG)
Allan Holdsworth, guitar, SynthAxe
Alan Pasqua, keyboard
Gary Husband, drums (tracks 1, 3)
Chad Wackerman, drums (tracks 4, 5), percussion (track 6)
Jimmy Johnson, bass (except track 6)
Biff Vincent, Roland Octapad bass (track 6)
John England, sound effects
Digitally remastered
Please Note: We offer this album in its native sampling rate of 48 kHz, 24-bit. The provided 96 kHz version was up-sampled and offers no audible value!