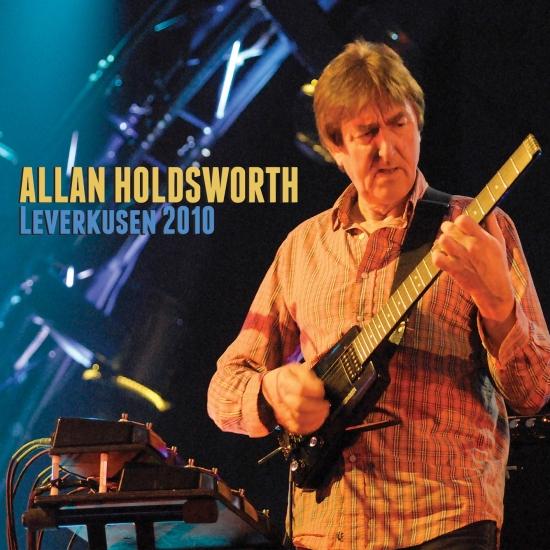 The double album features the great guitarist live at the Leverkusen Jazztage on November 9, 2010, 13 years after his triumphant performance at the 1997 Jazztage.
For this performance, Holdsworth was joined by acclaimed drummer and longtime collaborator Chad Wackerman and bassist Ernest Tibbs. The bassist also wrote the liner notes for the set, based on his personal memories of performing with Holdsworth.
Working with Holdsworth, however, presented some unique challenges for Tibbs, who is known for his work with a variety of artists from Andy Summers and David Benoit to Dionne Warwick and Lee Ritenour. "When you played in Allan's trio, you didn't have a pianist or keyboardist to rely on, so you had to be able to cover and be the driving force," Tibbs says. "Coming from an R&B background, I figured this would be a great experience for me. I took it as a challenge, and once I did it, it felt great."
As a guitarist's guitarist, Holdsworth's music and legacy have been embraced over the years by a who's who of axe wielders, from Eddie Van Halen and Joe Satriani to Frank Zappa and Tom Morello. It was Van Halen who brought the British-born Holdsworth to the attention of Warner Bros. Records. Records' attention, while Zappa once called him "one of the most interesting guitarists on the planet."
LEVERKUSEN 2010 begins with "Leave Them On," which later appeared on Gary Husband's studio album Dirty & Beautiful, Volume 1, with the slightly different title "Leave 'Em On. Other highlights include Holdsworth's live tracks "Proto-Cosmos" and "Water on the Brain - Pt. II," as well as the triple-take of "Madame Vintage," "Above and Below" and "The Things You See (When You Haven't Got Your Gun)." As is often the case, Holdsworth also generously shared the spotlight with his fellow musicians, covering the Wackerman composition "The Fifth" and allowing the drummer a solo on "Letters of Marque."
All in all, LEVERKUSEN 2010 is a worthy addition to Holdsworth's legacy of live performances marked by outstanding musicianship. Tibbs says, "I think Allan's music is in a class by itself. Harmonically and improvisationally, it's out of this world. People will still be studying his music a hundred years from now. I can see a whole new generation of young guitarists studying his music now, just like young saxophonists study the music of John Coltrane."
"Allan was a wonderful person, a really nice person, and he was very generous and very thoughtful," he adds. "I was honored to have the opportunity to play music with him and to play in his trio."
Allan Holdsworth, guitar
Ernest Tibbs, bass
Chad Wackerman, drums
Digitally remastered