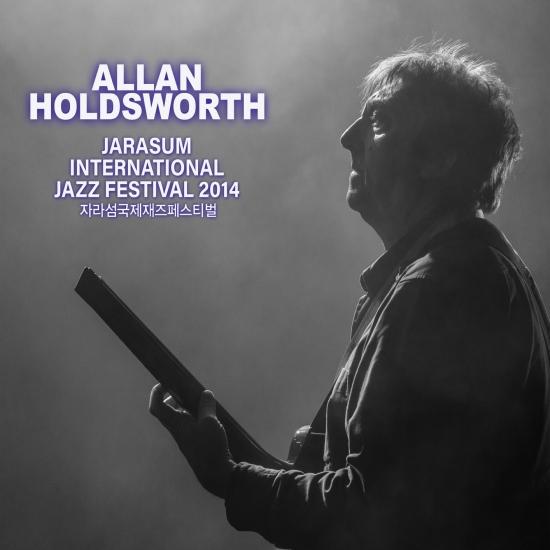 The double album features the guitar legend live at the 11th annual Jarasum International Jazz Festival in Gapyeong-Gun, South Korea, on 5 October 2014.
For this performance, Holdsworth was joined by acclaimed drummer and longtime accompanist Gary Husband and renowned five-string bassist Jimmy Haslip, known for his work with the Yellowjackets. The bassist also wrote the liner notes for the set, based on his personal memories of performing with Holdsworth and Husband, and can also be heard in an interview included as a bonus on the DVD.
The performance at the Jarasum International Jazz Festival came on the last day of a short tour that took the trio to Boston, New York, Chicago and Tokyo, Japan, before South Korea. "We were on the road a lot and had to deal not only with jet lag but also a cold October night, which made the performance all the more interesting," explains Haslip, who had no idea the show would be filmed. "Despite all this, it was always so inspiring to make music with Allan and Gary that all these things would never matter. We were in the moment and always wanted to take the music to the extreme."
This live album opens with the Holdsworth track "Texas", originally included on his 2000 studio album The Sixteen Men of Tain, and ends with the rarely played "The Un-Merry-Go-Round Part 5". The album also includes "Fred" and "Red Alert", two songs originally recorded by The New Tony Williams Lifetime, while "Letters of Marque" gave the band a chance to spread out, with Haslip and Husband each playing solos.
JARASUM JAZZ FESTIVAL 2014 follows the five previous releases in Holdsworth's live series, LEVERKUSEN 2010, LEVERKUSEN '97, LIVE IN JAPAN 1984, WARSAW SUMMER JAZZ DAYS '98 and FRANKFURT '86, which were enthusiastically received by Holdsworth's hardcore fanbase.
Although Holdsworth is best known in the world of jazz fusion, his influence went far beyond that genre. It was Eddie Van Halen who brought the British-born musician to the attention of Warner Bros. Records, and Frank Zappa once called him "one of the most interesting guitarists in the world". Holdsworth died on 15 April 2017 at the age of 70, but not before leaving behind an astonishing body of work.
Allan Holdsworth, guitar
Jimmy Haslip, bass
Gary Husband, drums
Digitally remastered