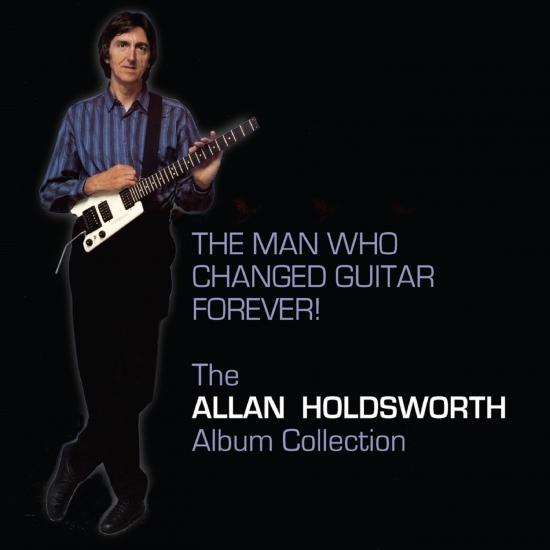 Info for The Man Who Changed Guitar Forever (Remastered)

The April 2008 Guitar Player Magazine cover featured guitar legend Allan Holdsworth and underneath his name it the following: The Man Who Changed Guitar Forever! This bold proclamation is not just the opinion of this one magazine, but an opinion shared by musicians and guitar aficionados everywhere and the perfect title for this collection.
The Man Who Changed Guitar Forever! is a 12 CD box set collection that contains all of Allan's eleven studio albums and one live album to date as a solo artist, producer, and group leader since 1980. These albums have been out of print and unavailable for several years, but have now been re-mastered and come in beautiful high quality packaging with a 40 page booklet full of extensive liner notes and archival photos.
The Man Who Changed Guitar Forever! is a must have for Allan Holdsworth fans and guitar aficionados alike. The rest of the world will finally see why Guitar World magazine cover story proclaimed, "He's as influential as Chuck Berry, Jimi Hendrix, and Eddie Van Halen."
Allan Holdsworth was inducted into Guitar Player's "Hall of Fame" in 1991 and his influence has crossed many genre lines including rock, jazz, and metal which is why he is considered by many to the be the guitarists' guitarist.
I. O.U. (1982)
Road Games (1983)
Metal Fatigue (1985)
Atavachron (1986)
Sand (1987)
Secrets (1989)
Wardenclyffe Tower (1992)
Hard Hat Area (1993)
None Too Soon (1996)
The Sixteen Men Of Tain (2000)
Flat Tire: Music For A Non-Existent Movie (2001)
Then! Live In Tokyo (2003)
Digitally remastered
Please Note: We offer this album in its native sampling rate of 48 kHz, 24-bit. The provided 96 kHz version was up-sampled and offers no audible value!