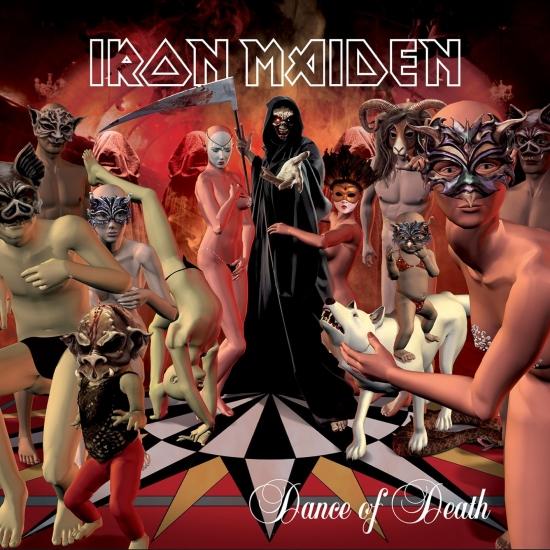 ReMastered Edition: Dance of Death is the thirteenth studio album by English heavy metal band Iron Maiden, released first in Japan on 2 September and then 8 September 2003 in the rest of the world excluding North America (where it was released a day later). The album was recorded on magnetic (analogue) tape.[1]
Their second studio release since the return of vocalist Bruce Dickinson and guitarist Adrian Smith in 1999, the album features the band's first-ever fully acoustic track, "Journeyman", as well as "New Frontier", their only song co-written by drummer Nicko McBrain. As with Brave New World, its predecessor in 2000, the record was produced by Kevin Shirley, who has worked with Iron Maiden on all subsequent releases.
"There's a very good case to be argued that a review of the latest Maiden album is a redundant exercise. Fans of the band (and they number in the millions) will adore it. The rest of us will just shrug our shoulders and make the odd Spinal Tap joke. Yet, while there's no denying the oft-comical aspects of all things heavy and metallic only the most hard-hearted of critics could deny the quality of their latest offering.
Dance Of Death is, appropriately enough, the band's thirteenth (woah...spooky) studio album and more than justifies their longevity. Always a band with a fearsome live reputation, this outing finds them playing at the top of their game and bringing a fair amount of that live prowess into the studio. Producer Kevin Shirley has spoken of them as being 'the last of the naturally moving rock bands', and DOD seems to bear this out. The whole thing has an almost organic feel to it with the rhythm section of drummer Niko McBrain (crazy name, dude) and bass player (and main writer) Steve Harris providing a rock solid backing for the three (count 'em) guitarist's fretboard fury, and Bruce Dickinsons operatic yowls.
Lest it be forgotten, this band have now been around, in one form or another, since 1976. Once considered the young pups of NWOBHM, Maiden now show youngsters how it's done. Dickinson has never sounded better (maybe his day job as a BBC DJ is good for the vocal chords?) and relative new boy Janick Gers (only with the band for thirteen years!) seems intent on cramming in as many wild solos as he can muster. From McBrain's count in on "Wildest Dreams'' to the last poignant chords of ''Journeyman'', DOD displays a rude energy that would shame the Darkness.
Song lyrics reflect the overall epic feel. War ("Paschendale"), religious martyrdom ("Montsegur") and, of course, death and horror ("Dance Of Death") all get the Maiden treatment. The only real lowpoint comes with "Age Of Innocence" whose lyrics seem ripped directly from the letters page of the Daily Express.
No matter. Maiden have always survived by ignoring fickle fashion and giving their loyal minions exactly what they want; all wrapped in the obligatory cover featuring deaths head mascot, Eddie. With Dance Of Death they won't have one dissatisfied customer." (Chris Jones, BBC Review)
Bruce Dickinson, vocals
Dave Murray, guitars
Janick Gers, guitars
Adrian Smith, guitars
Steve Harris, bass, keyboards
Nicko McBrain, drums
Digitally remastered