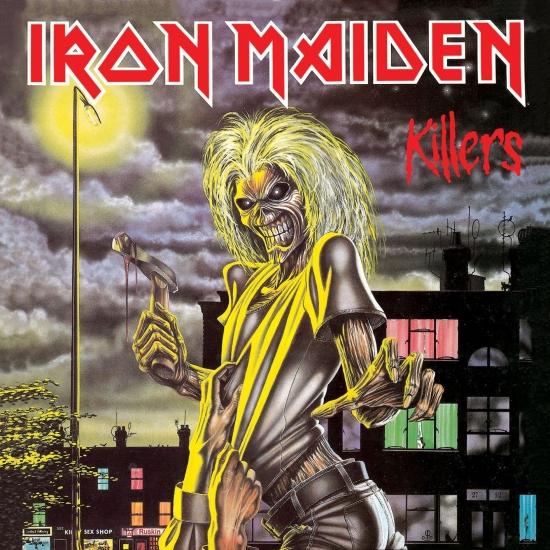 Killers is the second studio album by English heavy metal band Iron Maiden. It was first released on 2 February 1981 in the United Kingdom by EMI Records and on 6 June in the United States by Harvest and Capitol Records. The album was their first with guitarist Adrian Smith, and their last with vocalist Paul Di'Anno, who was fired after problems with his stage performances arose due to his alcohol and cocaine use. Killers was also the first Iron Maiden album recorded with producer Martin Birch, who went on to produce their next eight albums until Fear of the Dark (1992).
"Iron Maiden's sophomore effort, Killers, is mostly composed of pre-existing material that had been left off the debut, with just a few new additions. It's certainly a better-sounding release than the debut, with new producer Martin Birch beefing up the band's studio presence and lending their instrumental attack a newfound clarity that throws their considerable skills into sharp relief. In fact, this helps mask the fact that the songwriting isn't quite as strong overall as it was on the debut. But the teaming of new guitarist Adrian Smith with Dave Murray forms the most formidable twin-guitar attack in heavy metal, outside of Glenn Tipton and K.K. Downing. Plus, bassist Steve Harris' busy, driving lines are now consistently audible in the mix. The resulting instrumental fireworks are what truly make the album tick. That said, there's a much smaller percentage of catalog standards here than on the previous album. "Wrathchild" is the standout, re-recorded here with Smith on guitar from an earlier version for the Metal for Muthas compilation. There's a fair bit of unity in the lyrical themes, with a parade of murderers, fugitives, and characters otherwise torn from their roots. "Murders in the Rue Morgue" is a first-person retelling of the Poe short story, and the title track is another highlight, with Paul Di'Anno turning in an especially menacing performance. The single "Purgatory" has a catchy singalong chorus and a tempo worthy of Motörhead, while "Twilight Zone" (not included on the U.K. issue, but added to subsequent releases) scraped the bottom of the British charts. The biggest departure here is the almost Supertramp-like prog-pop of "Prodigal Son," a melodic, uptempo offering with an arrangement based around acoustic guitars. Despite some inconsistency in the material, Killers is clearly the work of a top-notch ensemble, and in order to take the next step forward, their musical ambitions were clearly going to require a vocalist as technically accomplished as the band. It's worth noting that some Maiden fans actually prefer the rawness of the Di'Anno years to the polish of the Bruce Dickinson era (though, it should also be noted, they're in the minority)." (Steve Huey, AMG)
Paul Di'Anno, vocals
Steve Harris, bass
Dave Murray, guitar
Adrian Smith, guitar)
Clive Burr, drums
Digitally remastered