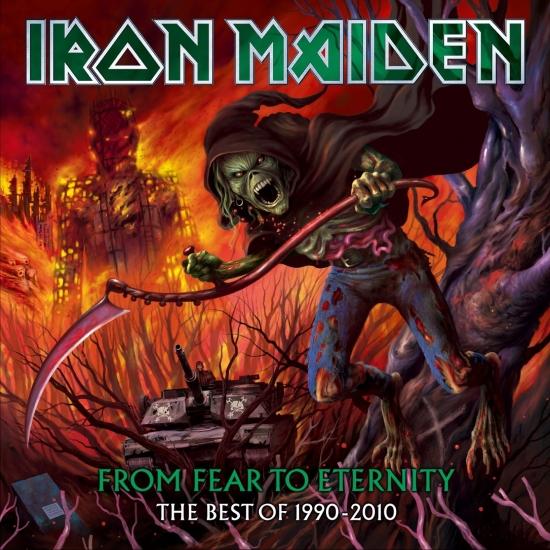 2011 collection from the Heavy Metal heroes containing their finest recordings from 1990-2010. From Fear To Eternity is a chance for new fans to explore the group's rich history, with the highlights of their last eight studio albums distilled into this handy collection, which follows 2009's Somewhere Back In Time compilation of their earlier work from 1980-1990. Perennial favorites found on this album include songs also featured on Maiden's current The Final Frontier World Tour set list; tracks such as "Fear Of The Dark," "The Wicker Man," "Blood Brothers" and "Dance Of Death" sit alongside recent classics "El Dorado" and the hauntingly evocative "When The Wild Wind Blows." It also includes singles like "Holy Smoke" and "Be Quick Or Be Dead" together with more progressive thought-provoking album tracks like "Afraid To Shoot Strangers" and "For The Greater Good Of God."
"From Fear To Eternity’ is a stirring effort from the band in not only bringing together their superlative work from the period, but in also resurrecting a number of tracks that deserve a second chance in the spotlight. Spanning years in which the band are writing more challenging, yet prevailingly fantastic material, the album serves as not only an introduction to the bands recent past, but also as preparation to Maiden‘s exciting future." (Tony Bliss, deadpress.co.uk)
"From Fear to Eternity: The Best of 1990-2010 collects 23 tracks over the span of two discs from the venerable British heavy metal legends. The first anthology to cover the band’s post-halcyon days, it’s remarkable how seamless the transition was. Unlike other acts that left their handprints in the cement in the late '70s and '80s, Iron Maiden never really lost steam, despite a mid-'90s shake-up that saw iconic lead singer Bruce Dickinson swapped out with Wolfsbane vocalist Blaze Bayley for two albums. The addition of keyboards, a controversial, late-'80s move that split some fans upon the releases of Somewhere in Time (1986) and Seventh Son of a Seventh Son (1988), proved largely tasteful and subtle, and did little to hinder their signature blend of fantasy-fueled symphonic metal and straight-up English hard rock. Culled from eight studio albums (including the pair of Bayley offerings), the songs on From Fear to Eternity may not reach the dizzying heights of the band’s Piece of Mind/Number of the Beast heyday, but stand-out cuts like “The Wicker Man,” “Different World,” “Tailgunner,” “Dance of Death,” and “Brave New World” bristle with the energy and conviction of a group 20 years younger. Dickinson's voice is apparently indestructible, and the triple-guitar attack, held down to the mat by the incomparable Steve Harris (founder/bassist), remains a veritable master class in heavy metal picking. It's an impressive feat, to say the least, but what stands out the most is the fact the band has amassed the kind of loyal, age-defying fan base that virtually guarantees a lifetime of sold-out world tours, a feat they managed to pull off without ever selling themselves out." (James Christopher Monger, AMG)
Bruce Dickinson, vocals
Dave Murray, guitar
Janick Gers, guitar
Adrian Smith, guitar
Steve Harris, bass, keyboards
Nicko McBrain, drums
Additional musicians:
Michael Kenney, keyboards on "Sign of the Cross", "Afraid to Shoot Strangers", "Fear of the Dark" and "The Clansman" (uncredited)