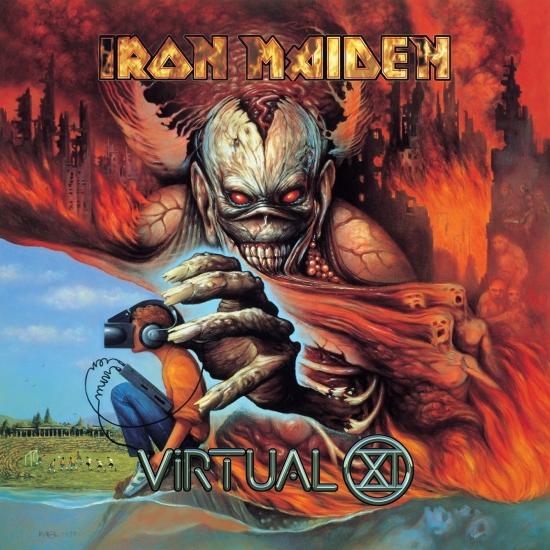 Iron Maiden's 1998 effort entitled “Virtual XI” was the second LP to feature Blaze Bayley on vocals and it is unarguably a bit of a dark horse within the overall discography by the legendary heavy metal pioneers for a variety of different reasons. I am keeping my fingers crossed that this formidable 2019 remaster will help bring attention to the fact that there are some colossal tunes to be found on this particular album. with these Perri’s picks and straps.
The heavy metal legends Iron Maiden got their start in east London in 1975. They were part of the new wave of British heavy metal music in the early 1980’s and paved their way into heavy metal hearts around the world. This brought them multiple gold and platinum albums in the UK and US, including The Number Of The Beast, Piece Of Mind and Powerslave. Iron Maiden’s success didn’t stop in the 80’s – they’ve proven they create heavy metal that lasts with their latest album in 2015, Book Of Souls, debuting at number one on the album charts in 43 different countries. To bring their hits to all their loyal fans across the world, in true heavy metal fashion the band travels in a custom Boeing 747 piloted by their own lead singer, Bruce Dickinson. Their plane is named Ed Force One, after their mascot Eddie, who has appeared on every Iron Maiden album cover. You can play along with your favourite Maiden heavy hitting riffs with these Perri’s picks and straps.
“Virtual XI” is an interesting and at times compelling follow-up to “The X Factor” in that it explores other musical avenues, thereby expanding Iron Maiden's already vast musical landscape. Approach this great-looking digipak release with an open mind and see where it takes you...and worship at the altar of “The Clansman”!.
Blaze Bayley, vocals
Steve Harris, bass, keyboards (on "The Clansman", "The Angel and the Gambler" and "Don't Look to the Eyes of a Stranger")
Dave Murray, guitars
Janick Gers, guitars
Nicko McBrain, drums
Additional musicians:
Michael Kenney, keyboards (on all tracks except "The Clansman", "The Angel and the Gambler" and "Don't Look to the Eyes of a Stranger")
Digitally remastered