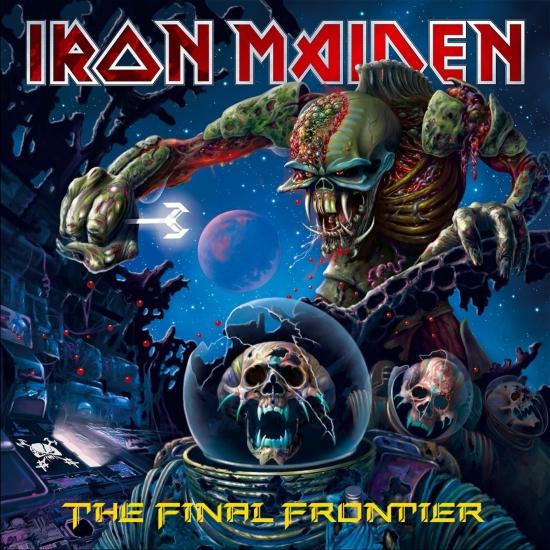 Info for The Final Frontier (2015 Remaster)

The band reunited with longtime Maiden producer Kevin "Caveman" Shirley in early 2010 at Compass Point Studios, Nassau, to record the album and then moved to L.A. to finish the recording and do the mixing. Compass Point Studio is very familiar to the band; it was where they recorded the Piece Of Mind ('83), Powerslave ('84) and Somewhere In Time ('86) albums.
Iron Maiden have more than earned their status as one of the foremost contemporary and influential rock bands in the world as they debut at #1 in the UK (their fourth No 1 album here, the first being 1982's seminal The Number of the Beast album) and 20 other countries to date with The Final Frontier.
Dickinson comments, "The studio had the same vibe and it was exactly as it had been in 1983, nothing had changed! Even down to the broken shutter in the corner...same carpet....everything. It was really quite spooky. But we felt very relaxed in such a familiar and well-trodden environment and I think this shows in the playing and the atmosphere of the album."
Thirty years on from their eponymous debut album in April 1980, The Final Frontier will be Maiden's 15th studio album, making a remarkable average of a new album every two years for 30 years and totaling over 80 million album sales during this period.
"When Iron Maiden's classic lineup famously reunited in the year 2000, their first new album, the quite excellent Brave New World, neatly reconnected both musicians and fans with the band's heritage, while simultaneously promising a prosperous future still to come. However, their next two efforts didn't fare quite as well, and whether Maiden was choosing to repeat the same moves without as much imagination or consistency on 2003's Dance of Death, or becoming bogged down in tiresome prog rock excess on 2006's desultory A Matter of Life and Death, it seemed that neither playing it safe nor taking risks was a surefire recipe for success anymore. And so the heavy metal icons took an extra year -- for them, a record-breaking four -- to work on their fourth post-reunion opus, and 15th career studio album overall, 2010's The Final Frontier, which, like many of their original mid-'80s classics, was recorded at legendary Compass Point Studios in the Bahamas, and aimed to reestablish an ideal balance of past and future, familiarity and freshness, complexity and immediacy. By and large, this is accomplished, and not just because of the futuristic themes spread across these songs, either -- nor the science fiction imagery used throughout the album's artwork, including the latest metamorphosis of the band's inseparable mascot, Eddie, this time into a hulking, green alien predator. No, there really is an unquestionable freshness about the futuristic themes and novel sonics explored by the intriguing percussive warm-up, "Satellite 15," which leads straight into the anthemic, arena-friendly opening title track; the muscularly riffed "Mother of Mercy," which recalls Bruce Dickinson's better mid-'90s solo efforts; and the remarkable "Coming Home," which is easily Iron Maiden's most convincingly executed semi-ballad since Fear of the Dark's "Wasting Love," and probably better to boot. The album's first half is rounded out by the surprisingly complex and cerebral first single "El Dorado," which was clearly written with "2 Minutes to Midnight" as a template (but isn't that good), before finally striking out with the efficient but ultimately somewhat forgettable speedster "The Alchemist," yet, all in all, this is a very impressive start. Too bad The Final Frontier's second half doesn't hold up so well, being stacked in worrisome fashion with five straight, longish compositions ranging from eight to eleven minutes in length. Even by Maiden standards, this is a tall order for fans to cope with (again!), and, sure enough, top marks are only deserved by the evocative Arthurian fantasy "Isle of Avalon," which is first out of the gate and captures all of the majesty and power you'd expect of an Iron Maiden epic, despite being no "Hallowed Be Thy Name" or "Rhyme of the Ancient Mariner" -- a "Paschendale," maybe. The remaining five-song monoliths produce only isolated moments of excellence and, amazingly, all begin in suspiciously similar fashion: via quietly plucked, déjà vu-inducing melodies framed by synthesizers before heading off on their individual, long-winded journeys. The "moments" include a strikingly aggressive riff sequence and reminisces of Somewhere in Time contained on "Starblind," and the vaguely psychedelic harmonies nestled somewhere deep within "The Man Who Would Be King," whereas "The Talisman" and Gaelic-inspired "When the Wild Wind Blows" merely recycle spare parts, for the most part, cherry-picked and reassembled from across the Maiden canon. This late dip in quality at the mercy of the band's more-is-more philosophy definitely leaves one pining for the days when heavier, punchier, and just plain shorter songs held equal appeal for Steve Harris and company; but, in good ways and bad ways, by hook or by crook, The Final Frontier still brings Iron Maiden closer to their aesthetic legacy and triumphant year 2000 rebirth than its two predecessors. And, at this stage in their career, Iron Maiden knows that nothing is more important than giving fans -- of all stripes -- what they want and expect. Why mess with a winning team, after all? [The Final Frontier's special -- aka "Mission" -- Edition was delivered with bonus content in a deluxe package outfitted to resemble a spaceship porthole.]" (Eduardo Rivadavia, AMG)
Bruce Dickinson, vocals
Dave Murray, guitar
Janick Gers, guitar
Adrian Smith, guitar, background vocals
Steve Harris, bass, keyboards
Nicko McBrain, drums
Digitally remastered