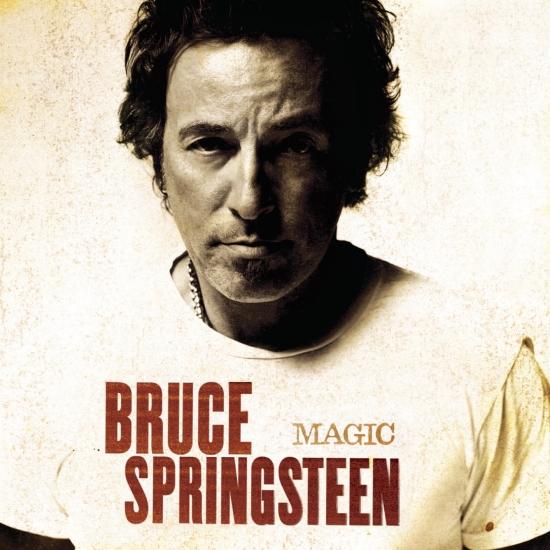 Springsteen reconvened the E-Street Band for 11 new songs on Magic, noting that the album’s title refers to the “times when what’s true can be made to seem like a lie, and what’s a lie can be made to seem true.” Magic debuted at #1 on the Billboard album chart, and singles “Radio Nowhere” and “Girls in their Summer Clothes” each won Grammys for Best Rock Song.
„Hailed as Bruce Springsteen's return to rock upon its release in fall 2007, Magic isn't quite as straightforward as that description would have it seem. True, this does mark another reunion with the E Street Band, only his second studio album with the group since 1984's Born in the U.S.A., giving this a rock & roll heft missing from his two previous albums -- the dusty, literary Devils & Dust and the raucous We Shall Overcome: The Pete Seeger Sessions -- and unlike The Rising, the first E Street Band album of the new millennium, there is no overarching theme here. It's just a collection of songs, something that Bruce hasn't done since Human Touch, or maybe even The River. All the ingredients are in place for a simple, straight-ahead rock album, except for two things: Springsteen didn't write a lot of flat-out rock songs, and with his producer Brendan O'Brien, he didn't make an album that sounds much like a rock & roll album, either. Magic is bright and punchy, a digital-age production through and through, right down to how each track feels as if it were crafted according to its own needs instead of the record as a whole.
Underneath this shiny veneer, the E Street Band can still lift this music toward great heights, infusing it with a sense of majesty, but this is an E Street Band that was recorded piecemeal in the studio, pasted together track by track as the group fit sessions into their busy schedules. This approach gives the album a bit of a mannered, meticulous sound not unlike The Rising, but such careful construction was appropriate for Springsteen's cautious, caring 9/11 rumination; on Magic it tends to keep the music from reaching full flight. Then again, the songs here don't quite lend themselves to either the transcendent sweep of Born to Run or the down-n-dirty roadhouse rockers that cluttered The River. There's a quiet melancholy underpinning this album. It's evident even on the hard-driving "Radio Nowhere," whose charging guitars mask a sense of desperation, or the deceptively breezy "Girls in Their Summer Clothes," which grows more wistful with each passing chorus. "Girls" is also indicative of how Magic doesn't quite feel like classic E Street Band, even when it offers reminders of their classic sound: like "Born to Run," it trades upon Phil Spector, but here the band doesn't absorb the Wall of Sound; they evoke it, giving the song a nostalgic bent that emphasizes the soft sadness in his melody. This oddly bittersweet vibe that is shared by "Your Own Worst Enemy," whose baroque harpsichords -- uncannily reminiscent of the Left Banke -- are the biggest curveball here.
That is, it's the biggest specific curveball outside of the overall feel of Magic, which is far too somber to be called just another rock & roll album. The solemn, sepia-toned picture of the Boss on the cover is a pretty big tip-off that there may not be a whole lot of good times coming on Magic, but it's a surprise that this is not only not as joyous as We Shall Overcome, it doesn't have as many moments of sunny relief as The Rising, which had "Waitin' on a Sunny Day" and "Mary's Place" among its quiet, artful grief. Here, the joy and the sadness are fused, skewing such otherwise lively numbers as "Livin' in the Future" -- which otherwise sounds like it could sneak onto the second side of Born in the U.S.A. -- toward the sober side. Springsteen also targets war and politics throughout the album, either through metaphors (the title track, where the audience is suckered by a con man) or blunt declarations ("Last to Die"). All this toil and tension doesn't make for a very fun album, but 2007 isn't a very fun time, so it's an appropriate reflection of the time. The thing of it is, despite some fine moments of craft -- both musical and lyrical, whether on "Gypsy Biker" or "Long Walk Home" -- the songs aren't written with the keen literary eye that made Devils & Dust play like a collection of short stories. Like the music, the words just feel a shade too deliberate, rendering Magic just a bit too overthought -- hardly enough to make for a bad record, but one that isn't quite grabbing, even if it is helped immeasurably by the E Street Band in old pro mode. And what's missing comes into sharp relief as the album draws to a close with "Terry's Song," a quickly written and recorded tribute to Terry Magovern, Springsteen's longtime friend and assistant. Compared to the rest of the album, this simple tune is a bit ragged, but it's soulful, moving, and indelible, immediate where the rest of the album is a shade distant. After hearing it, it's hard not to wish that Bruce would record this way all the time.“ (Stephen Thomas Erlewine, AMG)
Bruce Springsteen, lead and backing vocals, guitars, organ, harmonica, synthesizer, percussion
Roy Bittan, piano, organ
Clarence Clemons, saxophone, backing vocals
Danny Federici, organ, keyboards
Nils Lofgren, guitars, backing vocals
Steven Van Zandt, guitars, mandolin, backing vocals
Garry Tallent, bass
Max Weinberg, drums
Patti Scialfa, backing vocals
Recorded March 12–May 2007 at Southern Tracks Recording Studio, Atlanta, Georgia
Produced by Brendan O'Brien
Digitally remastered