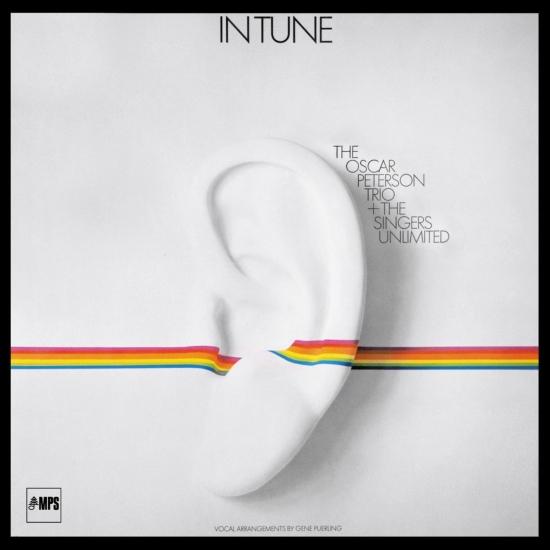 „The Singers Unlimited were a logical extension of the Hi-Lo's. Gene Puerling and Don Shelton were both members of the Hi-Lo's and, after the group broke up, Puerling became a greatly in-demand arranger. In 1967 Puerling, Shelton, Len Dresslar, and Bonnie Herman came together to form the Singers Unlimited. They were a very unusual vocal group because Puerling wrote complex arrangements for the singers that utilized extensive multi-track recording. Rather than sounding like four voices, they often sounded like 16 or more, forming a dense choir. The group never performed live in clubs and concerts and was purely a studio group, recording 14 albums during 1971-1981. Oscar Peterson heard some of their work and recommended them to the MPS label. In 1971 his trio with bassist George Mraz (who at the time was known as Jiri Mraz) and drummer Louis Hayes recorded with the Singers Unlimited, or at least laid down tracks for the vocalists to overdub over. Most of the selections on In Tune are ballads with spots for Peterson to solo, although the voices naturally dominate. Among the more worthy performances are 'The Gentle Rain,' 'The Shadow of Your Smile,' and the 'Sesame Street' theme. While In Tune (a straight reissue of the LP and a bit brief at 32 minutes) is a minor entry in the extensive discography of Oscar Peterson, it is considered an early milestone for the Singers Unlimited.“ (Scott Yanow)
Oscar Peterson, piano, vocals
Gene Puerling, vocals and arrangements
Don Shelton, vocals
Len Dresslar, vocals
Bonnie Herman, vocals
George Mraz, upright bass
Louis Hayes, drums
Recorded at MPS Studios, Villingen, July 1971
Engineered by Hans Georg Brunner-Schwer
Produced by Matthias Kunnecke, Hans Georg Brunner-Schwer
Reissue is part of the 'MPS - Most Perfect Sound Edition'. The original master tapes were transferred to digital with dCS 904 (192 kHz, 24-Bit)
Digitally remastered at Emil Berliner Studios, Hannover-Langenhagen