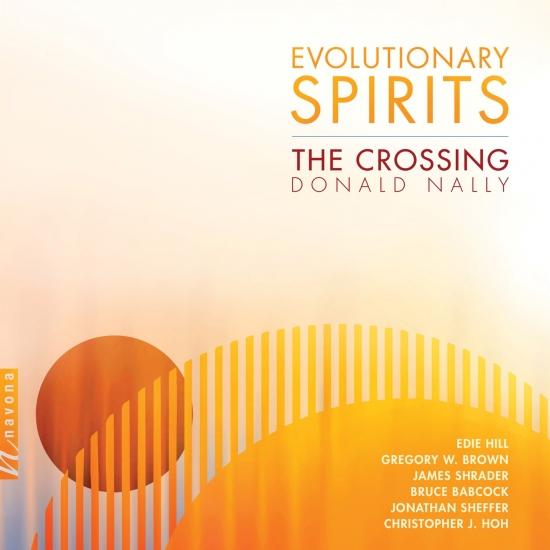 EVOLUTIONARY SPIRITS brings together the artistry of Grammy Award-winning chamber choir The Crossing with innovative works of six contemporary composers. Ranging from songs of praise from the Biblical era to present day, and from contemporary poetry to the reimagining of a Shakespearean sonnet, EVOLUTIONARY SPIRITS explores humanity in all its facets.
Edie Hill’s Poem for 2084 unearths a reflection on the state of the world through the dynamic effects of soaring soprano lines over mystical harmonies below. Hill’s second composition on the album, Marvellous Error!, offers equally powerful and compelling performances. Gregory W. Brown sets Latin and English texts, shifting effortlessly between simple and complex textures, producing otherworldly-sounding performances in the contemplative Vida Aquam and the ethereal Five Women Bathing in Moonlight. James Shrader’s celestial-sounding Angels Sang with Mirth and Glee creates a gentle, inspiring listening experience.
Christopher J. Hoh brings both a reimagination of Shakespeare’s famous (and humorous) My Mistress’ Eyes and an homage to the groundbreaking composer Elliott Carter with To Elliott. Jonathan Sheffer draws on an ancient Hebrew prayer in his y’did nefesh, which offers a plea for union with the Divine. Bruce Babcock’s meditative Be Still reflects on Psalm 46:10, with shimmering textures throughout the five-minute meditation on just eight words.
EVOLUTIONARY SPIRITS is a feat of choral and compositional strength. Handled with grace by The Crossing, it offers reflections on the human condition, the relationship between humanity and the Divine, and our connections to the past, present, and future.
The Crossing
Donald Nally, conductor
John Grecia, keyboards

Kile Smith: The Arc in the Sky

Ted Hearne: Sound from the Bench

The Crossing
is a professional chamber choir conducted by Donald Nally and dedicated to new music. Consistently recognized in critical reviews, The Crossing has been hailed as “ardently angelic” (Los Angeles Times, 4/14) and “something of a miracle” (The Philadelphia Inquirer, 7/14). Formed by a group of friends in 2005, the ensemble has since grown exponentially and “has made a name for itself in recent years as a champion of new music.” (The New York Times, 2/14). Highly sought-after for collaborative projects, The Crossing was the resident choir of the Spoleto Festival, Italy in 2007; appeared at Miller Theatre of Columbia University in the American premiere of James Dillon’s Nine Rivers with the International Contemporary Ensemble (ICE); joined Bang on a Can’s first Philadelphia Marathon; and has appeared with the American Composers Orchestra, Network for New Music, Lyric Fest, Piffaro, red fish blue fish, Tempesta di Mare Baroque Chamber Orchestra, PRISM Saxophone Quartet, Toshimaru Nakamura, Dolce Suono, and in the summer of 2013, The Rolling Stones. The ensemble has sung in such venues as Walt Disney Concert Hall, The Kennedy Center, Carnegie Hall, and the Metropolitan Museum of Art; they made their Lincoln Center debut this past summer in a world premiere of John Luther Adams in a collaboration with the Mostly Mozart Festival, Lincoln Center Out of Doors Festival, eighth blackbird, Jack Quartet, and TILT brass.
The Crossing frequently commissions works and has presented over forty world premieres. Upcoming projects include commissions with Pelle Gudmundsen-Holmgreen, David T. Little, Joel Puckett, Santa Ratniece, Caroline Shaw, Kile Smith, Lewis Spratlan, Hans Thomalla, Anna Thorvaldsdottir, and Toivo Tulev. The ensemble recently released two recordings on the Innova label: Christmas Daybreak– with world premiere recordings of James MacMillan and Gabriel Jackson—and I want to live – with the complete choral works for women by David Lang. Recordings soon to be released include Lewis Spratlan’s Hesperus is Phosphorus and Gavin Bryars’ The Fifth Century, both commissioned by The Crossing and on the Innova label, as well as Choral Music of Greg Brown on the Navona label. The Crossing is the recipient of two ASCAP Awards for Adventurous Programming as well as the Dale Warland Singers Commissioning Award from Chorus America.
Donald Nally
is responsible for imagining, programming, commissioning, and conducting at The Crossing. He is also director of choral organizations at Northwestern University and chorus master of The Chicago Bach Project. He has held distinguished tenures as chorus master for Lyric Opera of Chicago, Welsh National Opera, Opera Philadelphia, Spoleto USA, and for many seasons at the Spoleto Festival in Italy. He has served as artistic director of the Vocal Arts Ensemble of Cincinnati and the Choral Arts Society of Philadelphia. Among the many ensembles Donald has guest conducted are the Latvian State Choir in Riga, the Grant Park Symphony Chorus in Chicago, the Philharmonic Chorus of London, and the Santa Fe Desert Chorale. His ensembles have sung with the Philadelphia Orchestra, the Pennsylvania Ballet, Spoleto USA, the BBC Symphony Orchestra, Sinfonia Cymru, RAI National Symphony Orchestra, and ICE; his work is heard on numerous recordings on the Chandos, Navona, and Innova record labels. Donald is the recipient of the distinguished alumni merit award from Westminster Choir College and the Louis Botto Award for Innovative Action and Entrepreneurial Zeal from Chorus America; he is the only conductor to have two ensembles receive the Margaret Hillis Award for Excellence in Choral Music - in 2002 with The Choral Arts Society of Philadelphia, and in 2015 with The Crossing. His book, Conversations with Joseph Flummerfelt, was published in 2011.