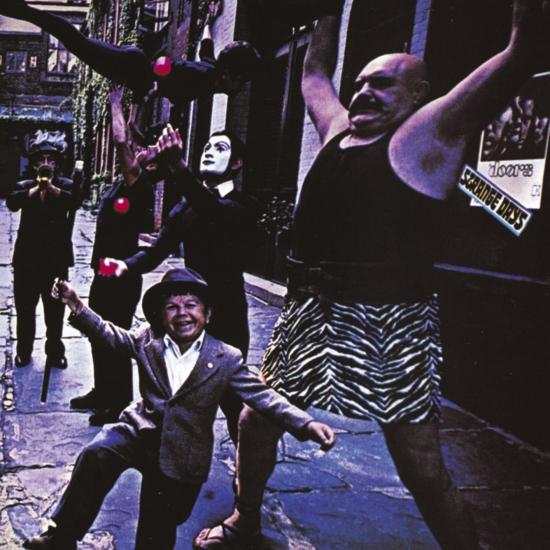 Strange Days, first out in October '67, went to #3 and introduced the Doors classics "People Are Strange," "Love Me Two Times" and "Strange Days."
"The Doors are an amazing group. Each of them are highly competent and talented musicians, yet music is only secondary to what they are doing. They are violently anti-commercial in their stance and their approach, and yet the finished product is highly commercial. And it would also appear that vocalist Jim Morrison is making a direct appeal to the pubescent market, but upon closer examination, it turns out that he is not.
As musicians, the Doors are very good. Their excellence of musicianship, however, is not seen as individuals, because they do nothing really new or different as soloists. Their excellence is together as a group — the total effect they achieve. The group is original and highly evocative.
Many of the chord progressions and figures are easily recognizable from their first album. Except for the addition of an occasional bass, the instrumentation is nearly identical to the previous LP. Through very logical development, they have improved their original methods and techniques with more effective instrumentation (a variety of keyboard sounds, a lot of slide guitar, and strongly musical electronic bridges). They have not attempted to make any big changes in direction or music (like so many groups mistakenly feel obligated to), but have refined and enriched their previous efforts. Consequently their new album has all the power and energy of the first LP, but is more subtle, more intricate and much more effective.
On a track like "Unhappy Girl," the various instrumental pieces and the vocal combine perfectly. The effect is overwhelming. "I Can't See Your Face in My Mind" is the only disappointing song on the record; it's mild without justification.
"My Eyes Have Seen You," "Strange Days," and "Love Me Two Times," all have the same commercial potential of "Light My Fire." They are heavy, evocative and climactic pieces.
As was strongly hinted in their first album, the Doors conceive their efforts primarily in terms of drama rather than in terms of music. The music is not meant to be particularly virtuoso or experimental. It is played to be dramatically meaningful. Before they formed as a group, the Doors were, individually, students at the UCLA drama school.
It was a unique qualification. Beginning with long hair and patterns of dress, rock and roll has become increasingly visual. Jimi Hendrix and the Who seem practically primitive next to the Doors. Rock and roll has become theatre.
Many people don't care to see Jim Morrison making it with his microphone in the manner of Mick Jagger nor do they especially want to watch him writhing on the floor. If they don't, then they suggest he is selling out to commercialism, has an old-fashioned concept of rock and roll or something. However, what's actually taking place on stage, and what Morrison is doing, is about 3000-years old fashioned and very contemporary in approach.
Music is very sensual and it is particularly obvious in rock and roll. Morrison is just not making any bones about it. He's just doing what comes naturally.
One must think of the Doors in a theatrical rather than a musical way. Their whole album, individual songs and especially the final track are constructed in the five parts of tragedy. Like Greek drama, you know when the music's over because there is catharsis. And, as the Doors suggest in their closing song, "When the Music's Over," you "turn out the light." (Rolling Stone)
Jim Morrison, vocals
Robby Krieger, guitars
Ray Manzarek, organ & piano
John Densmore, drums
Guests:
Douglas Lubahn, bass
Produced by Paul A. Rothchild
Mastered by Bruce Botnick & The Doors
Engineered at Sunset Recorders, Hollywood
Digitally remastered.
Rolling Stone "500 Greatest Album of All Time" #409