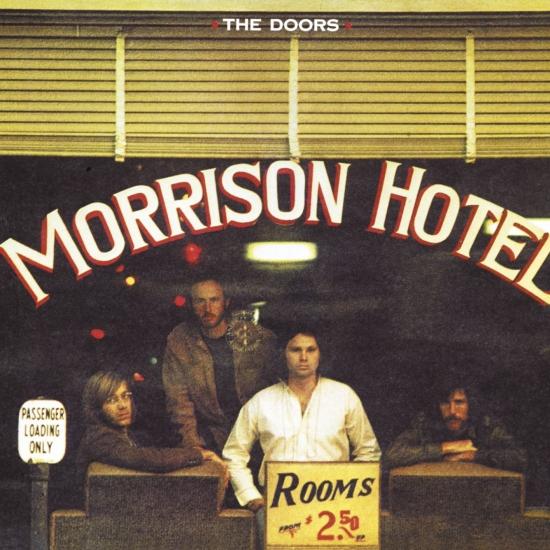 Morrison Hotel, The Doors' fifth album released in 1970 opened a new chapter in their history - gone were the psychedelic trimmings of the first two albums and the commercialism of the last two. Morrison Hotel is distinctly stripped down, and edgier. On this album, there is a slight steer toward blues even though no major hit singles were drawn from the album, Morrison Hotel peaked at #4 on the US album chart, and #12 in the UK. This is the next -to-last Doors album, recorded prior to Jim Morroson's death. Although Morrison Hotel embraces a new sound, all the elements of the Doors are firmly in place. The album contains two Bonus Tracks, Doors all-time-favourites - Waiting For The Sun and Ship Of Fools.
"Morrison Hotel opens with a powerful blast of raw funk called "Roadhouse Blues." It features jagged barrelhouse piano, fierce guitar, and one of the most convincing raunchy vocals Jim Morrison has ever recorded. This angry hard rock is that at which the Doors have always excelled, and given us so seldom, and this track is one of their very best ever, with brooding lyrics that ring chillingly, true: "I woke up this morning and I got myself a beer/The future's uncertain and the end is always near."
From there on out, though, the road runs mainly downhill. It's really a shame, too, because somehow one held high expectations for this album and wanted so badly to believe it would be good that one was afraid to listen to it when it was finally released. The music bogs down in the kind of love mush and mechanical, stereotyped rock arrangements that have marred so much of the Doors' past music. "Blue Sunday" and "Indian Summer" are two more insipidly "lyrical" pieces crooned in Morrison's most saccharine Hoagy Carmichael style. "Maggie M'Gill" is a monotonous progression in the vein of (but not nearly as interesting as) "Not to Touch the Earth," and "You Make Me Real" is a thyroid burst of manufactured energy worthy of a thousand mediocre groups.
Admittedly, these are the worst tracks, and the rest ranges from the merely listenable to the harsh brilliance of "Roadhouse Blues" or the buoyant catchiness of "Land Ho!", a chanty that sets you rocking and swaying on first listen and never fails to bring a smile every time it's repeated.
This could have been a fine album; but the unavoidable truth — and this seems to be an insurmountable problem for the Doors — is that so much of it is out of the same extremely worn cloth as the songs on all their other albums. It's impossible to judge it outside the context of the rest of their work. Robbie Kreiger's slithery guitar, and Manzarek's carnival-calliope organ work and whorehouse piano are the perfect complement to Morrison's rococo visions. But we've all been there before, not a few times, and their well of resources has proven a standing lake which is slowly drying up. Perhaps if they recombined into a different group the brilliant promise of the Doors' first album and sporadic songs since might begin to be fulfilled, but for now they can only be truly recommended to those with a personal interest." (Lester Bangs, Rolling Stone)
"Good hard, evil rock, and one of the best albums released this decade" and "possibly the best album yet from the Doors" (Circus Magazine)
Jim Morrison, vocals
Robby Krieger, guitars
Ray Manzarek, organ & piano
John Densmore, drums
Guests:
G. Puglese (aka John Sebastian), harmonica
Lonnie Mack, bass
Ray Neapolitan, bass
Produced by Paul A. Rothchild
Mixed and mastered by Bruce Botnick & The Doors
Digitally remastered.