GET ON BOARD Taj Mahal & Ry Cooder 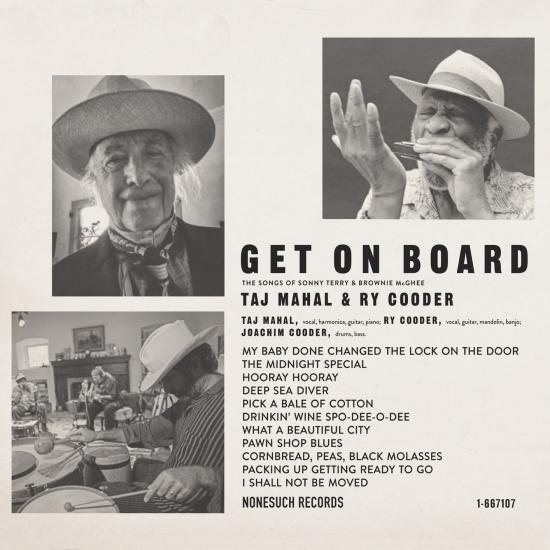 Info for GET ON BOARD

Nearly sixty years after they first played together, Ry Cooder and Taj Mahal, longtime friends and collaborators, reunite with an album of music from two Piedmont blues masters who have inspired them all their lives: GET ON BOARD: THE SONGS OF SONNY TERRY & BROWNIE MCGHEE, out April 22, 2022 on Nonesuch Records.
With Taj Mahal on vocals, harmonica, guitar, and piano and Cooder on vocals, guitar, mandolin, and banjo—joined by Joachim Cooder on drums and bass—the duo recorded eleven songs drawn from recordings and live performances by Terry and McGhee, who they both first heard as teenagers in California.
Explaining where Terry and McGhee took him musically, Cooder says, “Down the road, away from Santa Monica. Where everything was good. ‘I have got to get out of here,’ was all I could think. What do you do, fourteen, eighteen years old? I was trapped. But that first record, Get on Board, the 10” on Folkways, was so wonderful, I could understand the guitar playing.”
Taj Mahal adds, “I started hearing them when I was about nineteen, and I wanted to go to these coffee houses, ‘cause I heard that these old guys were playing. I knew that there was a river out there somewhere that I could get into, and once I got in it, I’d be all right. They brought the whole package for me.”
Taj Mahal and Ry Cooder originally joined forces in 1965, forming The Rising Sons when Cooder was just seventeen. The band was signed to Columbia Records but an album was not released and the group disbanded a year later. The 1960s recording sessions, widely bootlegged, were finally issued officially in 1992. Get On Board is Taj Mahal and Ry Cooder’s first recording together since then.
“They were so solid. They meant what they said, they did what they did … here’s two guys, a guitar player and a harmonica player, and they could make it sound like a whole orchestra.” — Taj Mahal
“It was perfect. What else can you say?” — Ry Cooder
Taj Mahal, vocals, harmonica, guitar, piano
Ry Cooder, vocals, guitar, mandolin, banjo
Joachim Cooder, drums, bass 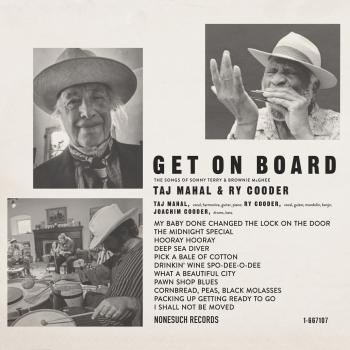 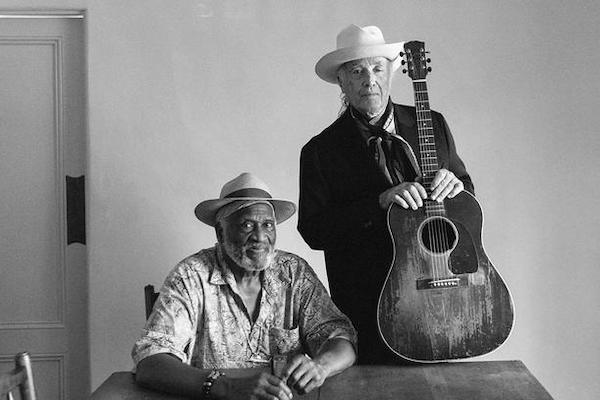