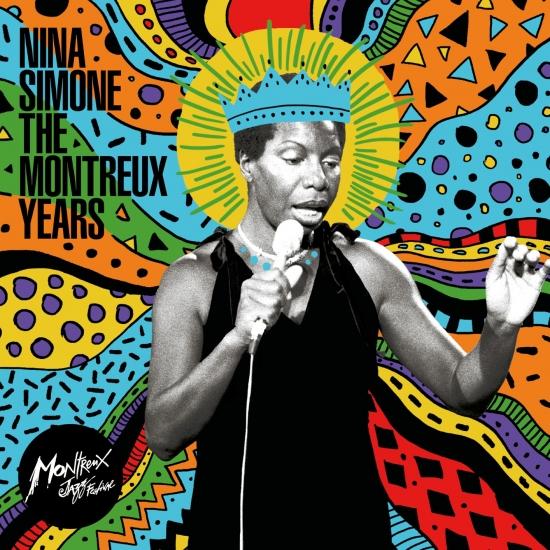 Nina Simone’s story from the late sixties to the nineties can be told through her legendary performances in Montreux. Taking to the Montreux stage for the first time on 16 June 1968 for the festival’s second edition, Simone built a lasting relationship with Montreux Jazz Festival and its Creator and Founder Claude Nobs, which uniqueness, trust, and electricity can be clearly felt on the recordings.
Featuring rare and previously unreleased material from Claude Nobs’ private collection, Nina Simone devotees worldwide will be thrilled by the inclusion of the powerful I Wish I Knew How It Would Feel To Be Free, poignant and fearless Four Women and Simone’s hauntingly beautiful performance of Ne Me Quitte Pas. A spinetingling version of Janis Ian’s searing and potent Stars, which Simone covered for the very first time during her 1976 Montreux performance, sits alongside her bold and electrifying re-imagine of Bob Marley’s ballad No Women No Cry in 1990. The collection closes with the encore of Nina Simone’s final Montreux Jazz Festival concert and one of Simone’s most loved and best-known recordings, the exuberant My Baby Just Cares For Me, showcasing the deep and multidimensional facets of Simone’s life and music.
Nina Simone
Digitally remastered

Fodder On My Wings (Remastered)

To Love Somebody (Remastered)

I Put A Spell On You (Remastered)

Let It All Out (Remastered)

Wild Is The Wind (Remastered)

Nina Simone And Her Friends

Nina Simone
Nina Simone (1933-2003) holds a unique place amongst the great jazz performers of all time. What sets her apart from other jazz masters is not only her captivating and sultry voice and skillful command of the piano, but her aptitude in almost every genre of music there is. She has taken soul, jazz, and pop to new levels, as well as proving herself in blues, gospel, Broadway, folk, classical, and opera. She also performed and recorded many of her own compositions.
Born Eunice Waymon in North Carolina, Simone grew up in a family with eight children. She started out as a classical pianist, but in 1954 the financial necessity of her family led her to take a job in an Atlantic City nightclub. After auditioning for the gig, the owner told her that she could have it, but only if she agreed to sing as well. Thus, Nina ("little one") Simone (French actress Simone Signoret), was born.
In the late 1950s, Simone began recording on a small label, Bethlehem Records. In 1959, she had a Top 20 hit. "I Loves You Porgy," a song from George Gershwin’s musical "Porgy and Bess." This was the only song that Simone recorded in her entire career that made the Top 40. Hits were not a big concern, however. Simone did just fine performing in nightclubs and making albums, most of them live recordings. She recorded nine albums in the early 1960s alone.
In the mid-‘60s, inspired by the Civil Rights Movement, Simone composed several songs, including "Old Jim Crow" and "Mississippi Goddam" which were issued on her first album with Philips (Nina Simone in Concert). "Mississippi Goddam" was written in response to the death of four black children in a church bombing, in 1963. It was her protest songs that best demonstrated Simone’s amazing ability to communicate, deeply and clearly, human emotion, especially those of Black people in the U.S.A. It was around this time that people began referring to Simone as the "High Priestess of Soul," after she put out an album of the same name. Along with her original songs, Simone chose some diverse covers. Songs like Weill–Brecht’s "Pirate Jenny," "I Put a Spell on You," and "See Line Woman," were among some of the others that Simone transformed into classics. Her experimentation with timing, her use of silence, her low and intense vocals, her impeccable piano playing capabilities, and her inimitable live act, turned every song she sang into a fresh and magnificent Nina Simone creation. In the late 60s and early 70s, Nina was recording for RCA. An original song, "Young, Gifted & Black" was considered somewhat of a Black national anthem of the time. This song, inspired by Lorraine Hansberry’s play of the same title, was has since been covered by Aretha Franklin and Donny Hathaway. During this brief period of time, Simone was remarkably prolific, releasing nine albums. Despite the quantity and quality of her product, Simone was not particularly well served by RCA.
Later in the decade, Simone’s personal life began to see some trouble. She divorced her husband and manager, Andy Stroud, and became disillusioned by the record industry when she found herself in financial trouble after all the effort she had put forth. Disgusted with show business, as well as with racism in the U.S.A., Simone moved to Barbados in 1974. In the years to come she lived in Liberia, Switzerland, Paris, the Netherlands, and the South of France. The frequency of her recordings slowed significantly after she left RCA, but in 1978, Simone released Baltimore, for the label CTI, which contained the definitive version of Judy Collins’s "My Father." Since then Simone has recorded several albums, most recently "A Single Woman," a studio album released in 1993. She has written her autobiography, I Put a Spell on You, received an Honorary Doctorate in Music and Humanities, and has continued to perform at festivals and events around the world.
Despite her self imposed exile and her obvious outspoken lack of appreciation for the recording industry, Nina Simone is a legend of incalculable magnitude. Still today she is able to arouse new and young listeners, as well as hold the attention of life-long devoted fans. Nina Simone has burned her soulful, musical wonders on the psyche of jazz lovers everywhere, and has inspired love and compassion in places seemingly bereft of such trying emotions. Rachel F. Newman (Source: Verve Music Group)