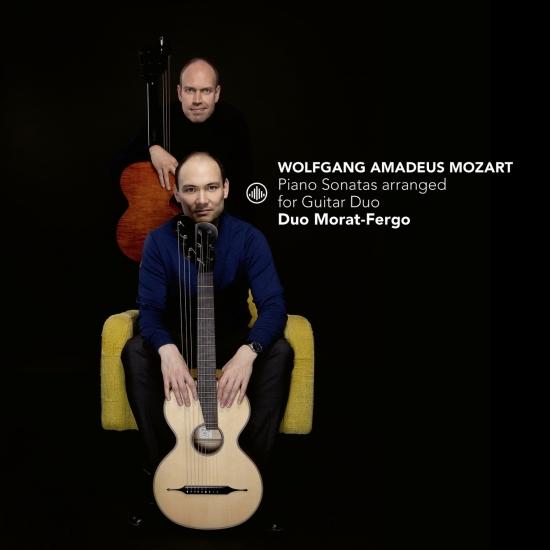 Although being technically very different instruments, we are convinced that the romantic guitar and the fortepiano share the same aesthetics. This was proven to us for the first time when we finally recorded our Schubert album ‘A Sentimental Moment’ in 2018, with piano works arranged for our Viennese guitars. After this, it was natural for us to turn to a composer who has fired more interest than anyone else: Mozart. We do hope that these arrangements of Mozart’s piano sonatas can suggest how he might have expressed his genius on our instrument. The shorter duration of the notes, as well as the delicacy and richness of colours found in the sound world of the guitar, are quite close to those of the late 18th Century fortepianos that Mozart would have known, while the dynamic range of the guitar would be very much at home in the salons and smaller concert venues of that time. Listening to the sonatas played on two guitars might be exotic, but the plucked sound fits in with the family of keyboard instruments.
A magic moment of music. Two fine musicians – Christian Fergo and Raoul Morat – played Schubert on two guitars. — Elisabeth Leonskaja, pianist
Raoul Morat, guitar 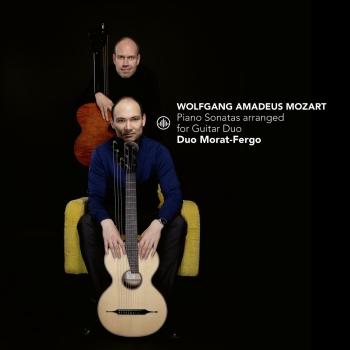 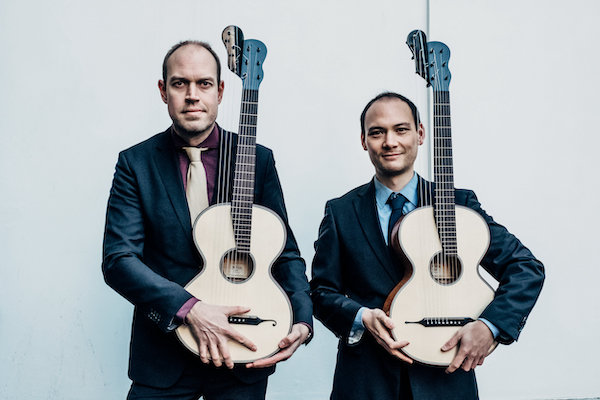 Duo Morat-Fergo
The critically acclaimed Swiss-Danish guitar duo Morat-Fergo was founded by classical guitarists Raoul Morat and Christian Fergo in 2014. They studied together at the music academy of Lucerne with German Echo-Prize winner Frank Bungarten. In only a few years they have created a new repertoire for romantic guitar duo through their arrangements of composers such as Mozart, Schubert, and Chopin and established themselves as one of the most exceptional guitar duos to emerge in recent years.
Their mutual captivation of Franz Schubert's music inspired them to start the duo to perform the masterpieces by the Austrian composer. Since then, they have expanded the repertoire for guitar duo with enthusiastic reactions form press and audience alike. In January 2015 they premiered their arrangement of Schubert’s Moments Musicaux Op. 94 in Lucerne, Switzerland, which since prompted an outstanding reception. The 'Grand Dame' of the great pianists of our time Elisabeth Leonskaja said this after hearing the duo: 'Recently I experienced a magical moment of music. Two fine musicians – Christian Fergo and Raoul Morat – played Schubert on two guitars. I felt transformed back to the time of Schubert and thought I heard pianos from his epoch. A moment full of magic sounds.'
The duo’s debut album ‘A Sentimental Moment’ (Challenge Classics), exclusively dedicated to the duo’s own arrangements of Schubert’s piano music sparked praise from the international press: “Sensational success” (Gitarre und Laute), “Astonishing…unbelievable moving” (Neue Luzerner Zeitung), “Magnificent” (Kerk en Leven), “Enchanting” (Tagesspiegel), “No allowances need really be made for the talented musicianship on offer here” (Dominy Clement, musicWeb International), A wonderful new recording. Highly recommended” (SRF2, Swiss Radio 2), “Singing and highly virtuosic. This CD is a must for Schubert connoisseurs” (Akustik Gitarre).
To come closer to the original sound of the early 19th Century, the duo plays copies of romantic Viennese guitars from the time of Schubert.
Their high artistic level combined with strong individual musical personalities has proven to be an exciting combination. Christian and Raoul have performed as duo and soloists in many countries across Europe including Norway, Finland, Denmark, Germany, the Netherlands, Switzerland, Austria, Italy, Ireland and China.
The duo's arrangement of Schubert's monumental lieder cycle 'Winterreise' for voice and guitar duo was premiered with tenor Julian Pregardien in 2016 to great acclaim. Further performances with tenor Georg Poplutz have made the significance of this arrangement clear: “A performance bringing the listener closer to Schubert’s music...” (Neue Luzerner Zeitung). The score for this arrangement is due to be published by Austrian music publisher Doblinger.
They have inspired contemporary Irish composer Martin O'Leary to write for the duo and in 2016 the duo premiered the work ”Schubertreise” on their Irish Tour.
Further chamber music partners include: bass-singer René Perler, tenor Georg Poplutz, the cellists Mattia Zappa (Tonhalle Orchestra, Zurich) and Sebastian Diezig (Lucerne Symphony Orchestra).
Duo Morat-Fergo has an exclusive recording contract with Challenge Records International.