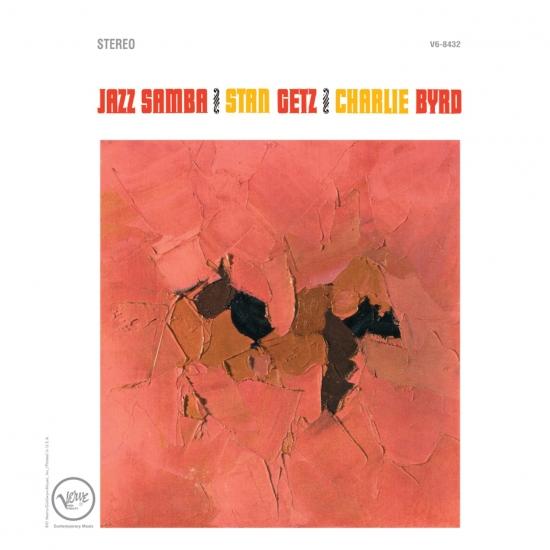 The album that launched Jobim's now classic 'Desafinado' Jazz Samba was released in 1962, in the early days of America's bossa-nova craze and before the music lost its charm to cliche. Joined by fellow Latin jazz pioneer Charlie Byrd on classical guitar, and a discreet bass and drums team, tenor saxophonist Getz makes light and elegant music out of a collection of catchy bossa-nova‘s and samba‘s.
His virtuosity, bluesy drive and smooth, soft tone make the music cook like bossa jazz rarely has since. There are still enough surprises to make this record more than just a period piece, and it stands as a fine example of Getz's lyrical genius.
„Jazz Samba“ was the first major bossa-nova album on the American jazz scene. It was the real start of the bossa-nova excitement in America, which peaked in the mid-1960s. Though Stan Getz was the featured star of the album, it was very strongly inspired and designed by the guitarist Charlie Byrd.
Stan Getz, tenor saxophone
Charlie Byrd, guitar
Gene Byrd, guitar, bass
Antonio Carlos Jobim, guitar
Keter Betts, bass
Buddy Deppenschmidt, drums
Bill Reichenbach, drums
Recorded in Pierce Hall, All Souls Unitarian Church, Washington D.C., February 13, 1962.
Engineered by Ed Green
Produced by Creed Taylor
Digitally remastered.