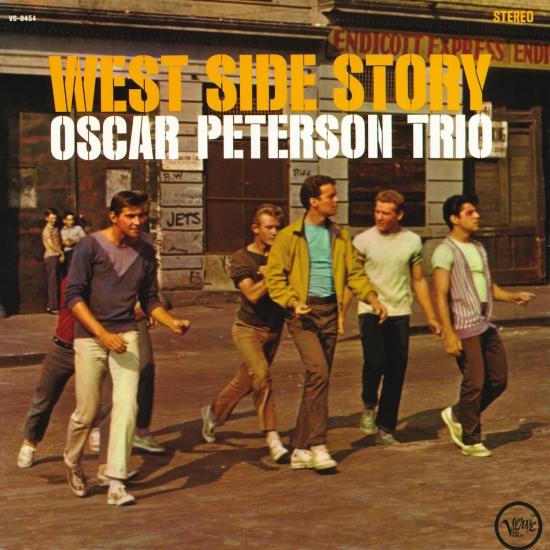 One of the first Broadway musical scores to be overtly jazz-influenced was Leonard Bernstein's West Side Story, a tale of rival street gangs in the inner city. In 1962, pianist Oscar Peterson put his light-swing signature on the already popular score, making it, in the words of one critic, 'a delight to hear again' and earning him a Grammy nomination.
„West Side Story was a bit of an unusual session for several reasons. First, the popularity of both the Broadway musical and the film version that followed meant that there were many records being made of its music. Second, rather than woodshed on the selections prior to entering the studio, the Oscar Peterson Trio spontaneously created impressions of the musical's themes on the spot. 'Something's Coming' seems like a series of vignettes, constantly shifting its mood, as if moving from one scene to the next. Ray Brown plays arco bass behind Peterson in the lovely 'Somewhere,' while the feeling to 'Jet Song' is very hip in the trio's hands. The snappy interplay between the musicians in the brisk setting of 'Tonight' turns it into a swinger. 'Maria' initially has a light, dreamy quality, though it evolves into a solid groove. The romp through 'I Feel Pretty' is full of humor, while the album closes with a brief reprise of several themes from the musical to wrap the session with a flourish.“ (Ken Dryden, AMG)
Oscar Peterson, piano
Ray Brown, double bass
Ed Thigpen, drums
Toots Thielemans, harmonica
Recorded January 24–25, 1962 in New York City, NY
Produced by Norman Granz, Jim Davis
Digitally remastered
Please Note: we do not offer the 192 kHz version of this album, because there is no audible difference to the 96 kHz version!