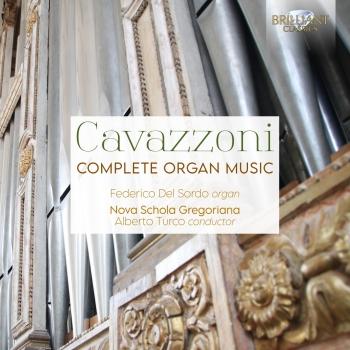 Federico Del Sordo
organist and harpsichordist, has long devoted himself to performance of the Italian alternatim repertoire: he has recorded for Brilliant Classics the complete Masses of Claudio Merulo (95145), the three Masses of Giovanni Salvatore (95146), as well as the entire Magnificat cycle by Giovanni Battista Fasolo.
He is a professor at the S. Cecilia Conservatoire and the Pontifical Institute of Sacred Music, both based in Rome. Appearing regularly at major international events, Nova Schola Gregoriana of Verona has made a name for itself among scholars for its meticulous attention to musicological detail. The group has toured widely in Japan, the United States, Brazil, Spain, Belgium, Hungary, Russia, Greece, Croatia, Germany and Mexico. Members: Nicola Bellinazzo, Andrés Montilla Acurero, Gennaro Becchimanzi (soloist), Marco Repeto, Mariano Zarpellon.
Alberto Turco
has directed the Cappella Musicale of Verona Cathedral and the Istituto Diocesano di Musica Sacra in Verona since 1965. He has taught music at the Seminario diocesano in Verona, Gregorian chant at the Pontificio Istituto di Musica Sacra in Milan, and liturgical musicology at the Studio Teologico San Zeno in Verona. As an editor he specializes in Gregorian palaeography and liturgical editions of Ambrosian chant, publishing the l’Antiphonale Missarum Simplex (2001), the Antiphonale Missarum of the schola (2005) and the new edition of Psallite Domino, in Gregorian chant, with the simpler melodies for the liturgy in Latin. At present his publishing activities focus on the analysis and rhythmical interpretation of Gregorian melody. Forthcoming releases include a recording of the entire Kyriale Romanum and the Liber Gradualis, iuxta ordinem Cantus Missæ, with magis critica restoration of the melodies.