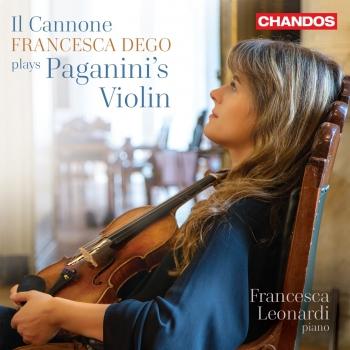 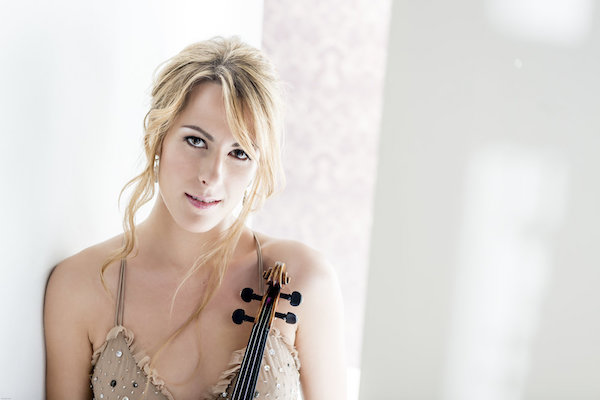 Francesca Dego
Celebrated for her sonorous tone, compelling interpretations and flawless technique, Francesca Dego is quickly becoming one of the most sought after young violinists on the international scene. Signed in 2012 by Deutsche Grammophon, her debut album of Paganini’s 24 Caprices and a subsequent complete survey of Beethoven’s Violin Sonatas received critical acclaim. Autumn 2017 sees the release of her highly anticipated first concerto disc featuring works by Paganini and Wolf-Ferrari.
Born in Lecco, Italy, to Italian and American parents, Francesca regularly appears with major orchestras worldwide. Recent and forthcoming highlights include performances with the Gürzenich, City of Birmingham, Royal Philharmonic, Philharmonia, Tokyo Symphony and Tokyo Metropolitan Symphony Orchestras, Grosses Orchester Graz, a tour of the Netherlands with Het Gelders Orkest and the Orkest van het Oosten, as well as performances at Cremona Stradivari Festival and with the Teatro Colon Orchestra of Buenos Aires, Orchestra Classica do Sul, Mannheimer Philharmoniker and Orchestre Philharmonique de Monte-Carlo.
In her home country she collaborates with orchestras such as Milan's "La Verdi", Filarmonica Arturo Toscanini, the Haydn Orchestra of Bolzano, the Genova, Bari, Bologna, Trieste, Verona and La Fenice Venice Theatre Orchestras as well as the Orchestra della Toscana. She is the winner of numerous national and international Competitions, and in 2008 garnered widespread attention for being the first Italian female prizewinner of the renowned "Paganini Competition" in Genoa since 1961. In addition she was awarded the "Enrico Costa" prize for having been the youngest finalist.
Her international career to date has allowed her to work alongside many esteemed conductors including Christopher Franklin, Gianluigi Gelmetti, Paul Goodwin, Christopher Hogwood, Yoel Levi, Grant Llewellyn, Gianluca Marcianò, Wayne Marshall, Diego Matheuz, Shlomo Mintz, Sir Roger Norrington, Donato Renzetti, Daniele Rustioni and Xian Zhang as well as perform in prestigious venues such as London's Royal Festival and Wigmore Halls, the Moscow Conservatory Grand Hall, Beijing's NCPA and Rome's Auditorium Parco della Musica. Recital dates in 2017/18 take her to Shanghai, Beijing, Tokyo, Rome, London and Hamburg among others.
Francesca was selected to perform as soloist at the Concerts for Life and Peace in Bethlehem and Jerusalem with the Orchestra Giovanile Italiana under Nicola Paszkowski and at the 2014 and 2015 Remembrance Day Concerts in Rome, broadcast worldwide by RAI. In June 2014 she performed at Rio de Janeiro's Teatro Municipal at the opening of the Football World Cup in Brazil. She has recently been named the first female classical musician to be dressed by the Italian fashion house Versace.
Francesca plays on a precious Francesco Ruggeri violin (Cremona 1697) and the ex-Ricci Guarneri del Gesù (Cremona 1734) courtesy of Florian Leonhard Fine Violins.
Francesca Leonardi
Performing in public from a young age, pianist Francesca Leonardi regularly appears in prestigious venues and festivals around the world. In 2015 she was a part of the Remembrance Day performance in the Santa Cecilia Hall of the Auditorium Parco della Musica in Rome, broadcast worldwide by RAI. Other distinguished performances include Sala Verdi and Teatro dal Verme in Milan, Royal Albert Hall in London, “Les Flâneries Musicales” Festival in Reims, “Accademia Chigiana” in Siena and Politeama Theatre in Palermo for the Opening of the “Amici della Musica” season. Highlights of the coming season include a Trio tour and performances of Beethoven’s Triple Concerto alongside the Budapest MAV Orchestra. Solo and chamber music recitals will take Francesca to Italy, UK, Turkey, Germany, China, Japan and United States.
From her earliest years Francesca has earned distinction in many national and international competitions, winning 14 first prizes and, in 2011 she was awarded the Phoebe Benham Junior Fellow in Piano Accompaniment at the RCM. She gave her soloist début at 16 performing Mozart’s Piano Concerto No. 13 in C major with the Rosetum Orchestra and has since been invited to join many Italian and international orchestras as a soloist. She has toured Japan, China, the US, where she is completing the set with all Beethoven piano concertos, and South America, where she performed at the Colon Theatre in Buenos Aires, for the “Semana musical Llao Llao” in Bariloche and Theatro Municipal in Rio de Janeiro for the opening ceremony of the Football World Cup in 2014, on a number of occasions. Francesca is actively involved in the field of chamber music performance and regularly performs with instrumentalists, singers and chamber ensembles. Since 2011, she frequently collaborates with acclaimed English pianist Nigel Clayton in piano duo performances.
Francesca has performed in many live broadcasts on RAI Radio and TV, Tv2000, Radio Classica, the Italian Swiss Radio, the Vatican Radio and selections from her CDs have been included in the soundtrack of the 2008 film “The beautiful Truth” by prize-winning director Steven Kroschel. Her first solo recording – Debussy’s Second Book of Preludes and Chopin’s Andante Spianato e Grande Polonaise, was published by “Classica Viva” Musical Editions in May 2007. She is also the first Italian female pianist to record for the prestigious label “Deutsche Grammophon”, recently completing a recording of the Beethoven Violin Sonatas with regular violin collaborator of thirteen years, Francesca Dego.
Born in Milan in 1984, Francesca began studying the piano at the age of three under the guidance of Graziella Bianchi and Paolo Bordoni. She graduated from the Milan Conservatoire in 2004 with top marks, cum laude, and special mention. She continued her studies at the Musical Academy in Pescara, at the Chigiana Academy in Siena and at the Royal College of Music in London where she was awarded both a Masters in Performance and Artist Diploma in Piano Accompaniment with Distinction in 2012, under Nigel Clayton and Roger Vignoles, generously supported by The Gordon Calway Stone Memorial Award. From a very early age Francesca has shown enthusiasm and passion for teaching and following this passion has become a chamber music tutor at the “Ghedini” Conservatoire in Italy.