What Comes Next Peter Bernstein 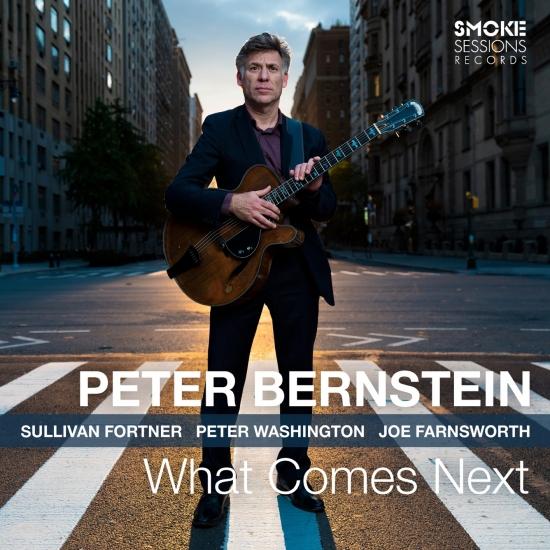 Info for What Comes Next

The title of What Comes Next, the latest album by guitarist Peter Bernstein, certainly echoes a question that we’ve all been asking ourselves in recent months. Locked away, wary of leaving the house during a global pandemic, divided by politics and protests, all during the most vital Presidential election in living memory – any one of those issues would spell an uncertain future.
But look again at that title: Bernstein very deliberately left off the question mark. While the interrogative continues to apply, especially for musicians in a world without gigs, Bernstein set out to make a statement as well. Due out October 16 on Smoke Sessions Records, What Comes Next not only arrives in the midst of quarantine but was recorded during the lockdown as well. With what once was the simple act of gathering four stellar musicians in a room to play music together, the album points a musical way forward in the way that only the most incisive jazz can.
“Without the question mark, What Comes Next implies that you have some idea, some intention,” Bernstein explains. “That seems like such a huge concept now, but it’s inherent to the very idea of playing jazz. It’s the basic question that we deal with all the time when we’re given the freedom to improvise: now what do I play? What note should come next? Where are we in the conversation? With everybody’s lives being put on hold, that idea can be extended beyond the fact of just playing music.”
With tour schedules and conflicting dates hardly being an issue these days, Bernstein assembled a dream quartet for the date. He’s joined by Grammy-winning pianist Sullivan Fortner (Cécile McLorin Salvant, Roy Hargrove), drummer and frequent collaborator Joe Farnsworth (McCoy Tyner, Pharoah Sanders) and for the first time on one of the guitarist’s own sessions by the always exquisite bassist Peter Washington (Bill Charlap, Art Blakey and the Jazz Messengers).
The opportunity arose when New York’s legendary Sear Sound studio reached out to Smoke Sessions about the possibility of attempting a responsible recording date. The label quickly sprang into action developing a plan to test everyone in advance and then to adhere to social distancing while in the studio. “We all kept our masks on,” Bernstein recalls, “It felt a little strange at first, but I’m just thankful for the chance to try and create something with musicians I love. It was such a beautiful day.”
The timing was especially fortuitous as three months of isolation had given Bernstein plenty of opportunity to compose some new music. Two of the pieces on What Comes Next were written in quarantine: the title tune, which feels like a tentative but optimistic waltz into a an undetermined future; and the melancholy “Empty Streets,” which reflects the unsettling feeling of living in one of the most hectic and densely populated cities on the planet and finding it devoid of its usual humanity.
“It was really bizarre,” Bernstein describes. “I felt like this place is too big to be so quiet. It was a little bit spooky, but in a strange way necessary. The streets should have been empty at that point.”
Bernstein didn’t set out to write music confronting the tenor of the times, but the feeling inevitably seeped into his songs. That’s the usual path that the guitarist takes when composing, another way in which the album title feels relevant. “I try to let a tune write itself as much as possible,” he describes. “I tend to tinker with music for a long time until it feels like it has its own identity. I try to get inside the consciousness of what I’ve written and then ask, ‘What does it want to be next?’”
The relaxed opener, “Simple as That,” is a mainstay of the guitarist’s repertoire, originally recorded on his album Heart’s Content in 2003. He had performed it several times with Fortner and Farnsworth during his week-long stint at the iconic Village Vanguard, just before the club shuttered its doors for the foreseeable future. The gritty, mid-tempo “Blood Wolf Moon Blues” was originally recorded on Jimmy Cobb’s 2019 Smoke Sessions album This I Dig of You, the drum giant’s final date, which also featured the late pianist Harold Mabern. Bernstein reprised the tune in memory of both lost elders.
Two more Bernstein originals make their debuts here: the blistering “Harbor No Illusions” is an obstacle course for the band, which navigates the tricky harmonic twists and turns with agile flair. “Dance In Your Blood” takes its title from a poem by the 13th century Sufi mystic Rumi, its lithe movement a vibrant reflection of the dancing sentiment.
What Comes Next also marks the premiere recording of a tune by tenor titan Sonny Rollins, a jazz pioneer who has provided answers to the titular question many times over. “Newark News” joins the ranks of great calypsos, including the classic “Don’t Stop the Carnival,” that Newk has written over the course of his career, and lets Farnsworth and Washington loose on a buoyant groove. Bernstein had performed the tune live with Rollins during a series of concerts in 2010 and 2011, and received the jazz icon’s blessing to record it.
In addition to his own tunes, Bernstein decided to add a mesmerizing version of Dizzy Gillespie favorite “Con Alma” to the date, showcasing the band’s abilities to put a bold new spin on even the most familiar of tunes. And the elegant standard “We’ll Be Together Again” offers a resonant sentiment for the moment; Bernstein takes the song’s only solo, suggesting a lone musician’s dream of a day when stages will be shared once again.
Peter Bernstein, guitar
Sullivan Fortner, piano
Peter Washington, bass
Joe Farnsworth, drums 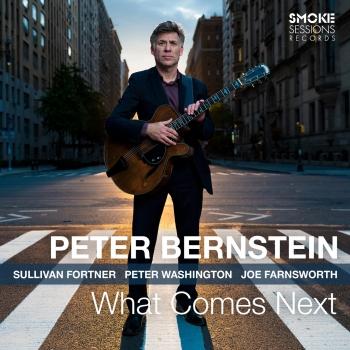 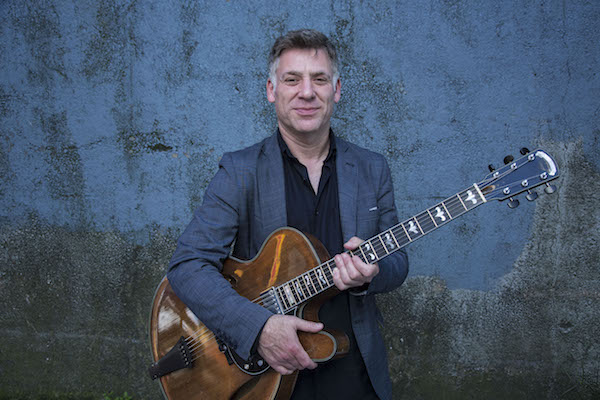 Peter Bernstein
Jazz guitarist Peter Bernstein (b. 1967, New York City) has been a part of the jazz scene in New York and abroad since 1989. During that time he has participated in over 80 recordings and numerous festival, concert and club performances with musicians from all generations. As a leader, Peter has released nine albums and a DVD, Live at Smoke.
He got his first break while attending the New School when he met the legendary guitarist Jim Hall. Hall asked Peter to participate in his Invitational Concert as part of the 1990 JVC Jazz Festival. The event featured such guitarists as John Scofield and Pat Metheny and was release as Live at Town Hall Vol. 2. by Music Masters. Hall noted that Peter “...has paid attention to the past as well as the future. He is the most impressive guitarist I’ve heard. He plays the best of them all for swing, logic, feel and taste.”
Also in 1990, Peter Bernstein was discovered by alto saxophonist Lou Donaldson and took part in the first of four recordings with him. He was a regular member of his group throughout the 1990s. “Some people just have it.” Donaldson said. “...most of the time you have to teach someone what to do, but Peter knows it all.” Peter has also enjoyed long musical associations with legendary drummer Jimmy Cobb (Cobb’s Mob), as well as organist Larry Goldings and drummer Bill Stewart as a member of their highly acclaimed trio. The New York Times called them “the best organ trio of the last decade”. Together they recorded a dozen of records, all of which display their distinctive sound, whether exploring the depths of jazz standards or playing their original compositions.
From 1995 through 1997, Peter was a member of Joshua Redman’s band and played on Redman’s Freedom in the Groove CD. He played with Diana Krall’s quartet from 1999 through 2001 and with Dr. Lonnie Smith, the legendary organist who made his debut on the George Benson Cookbook albums. He has also recorded five CDs with organist Melvin Rhyne, known for his association with Wes Montgomery. In addition, Peter has appeared in groups led by Nicholas Payton, Sonny Rollins, Lee Konitz, Tom Harrell, and Eric Alexander.
Current projects include his recent album, Monk, recorded for the newly reactivated Xanadu label. Together with Doug Weiss and Bill Stewart, he put their own spin on the rich legacy of Thelonious Monk.
In September, Bernstein released a solo guitar record, Solo Guitar – Live at Smalls (Smalls Live), an intimate recording that makes you feel like you’re sitting in the front row at Small’s jazz club in New York City. Peter’s an extremely elegant musician with a gorgeous tone that seems to relax you when you hear it. - The Jazz Bakery, Los Angeles
The jazz guitarist, among the most sought after in the New York area, has a feather-light touch, an encyclopedic knowledge of chords and the ability to play standards like he’s inventing them on the spot. - The Los Angeles Daily News
Mr. Bernstein is a fluidly improvising guitarist in the post-bop tradition, with control over harmony and a beautiful sound. - The New York Times
Peter Bernstein produces a warm, ringing, muscular tone which echoes that of such giants as Wes Montgomery, Jim Hall, and Kenny Burrell. - Jazziz