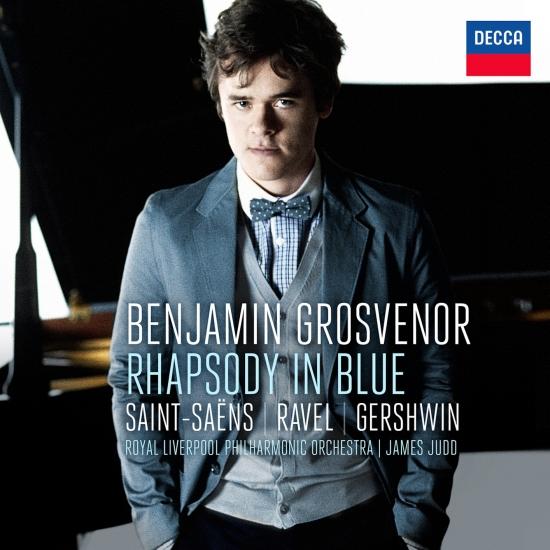 The three principal works that Benjamin Grosvenor has chosen for his first concerto album complement each other perfectly. The urbane charm and dazzling virtuosity of Saint-Saëns lead naturally on to the brittle brilliance and dry wit of his fellow Frenchman Ravel. Ravel’s distinctly jazzy G major Concerto was written soon after he’d met Gershwin, and just a few years after the great Broadway songsmith had so spectacularly gatecrashed his way into the classical world with his syncopated, note-bending Rhapsody in Blue.
“Rhapsody in Blue needs neither verbal advocacy nor apology from me”, says Benjamin Grosvenor. “It’s simply a work of rapturous inventiveness – a sort of ‘musical kaleidoscope of America’, as Gershwin himself called it.” In his new recording, Benjamin Grosvenor puts aside the large and less wieldy symphonic version in favour of the original jazz-band arrangement that Ferde Grofé made for the work’s 1924 premiere, given by Gershwin himself with the Paul Whiteman Band. “It’s a more intimate version”, says Grosvenor, “very colourful and extremely interesting – it even includes a banjo, which adds a unique sound.”
As for the two French concertos, they’re very much part of a personal crusade: “I’ve often felt that the French piano repertoire is underrated or that it’s judged as no more than opulent mood-music or ‘pictures in sound’, but I’ve adored the Ravel and Saint-Saëns concertos from the first time I heard them.”
Benjamin Grosvenor, piano
Royal Liverpool Philharmonic Orchestra
James Judd, conductor