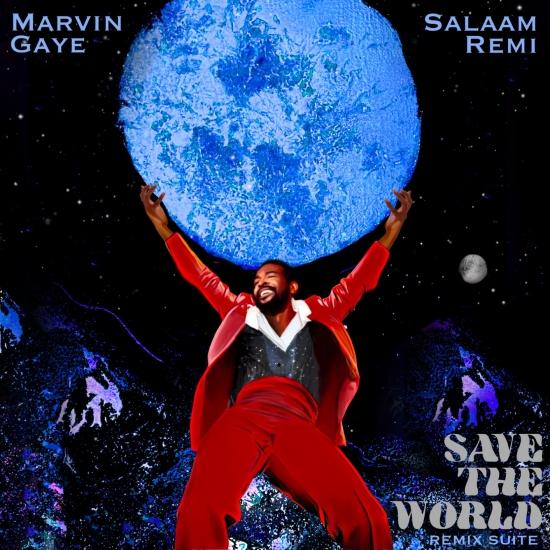 Info for Save The World Remix Suite

"Marvin Gaye has been my favorite artist as his 70s LPs are unmatched as singular bodies of work," says ReMi. "It was an honor to be able to look at the What's Going On LP and to be able to create a remix suite to sit next to it. This is a dream come true. LoveLiveMPG."
Known for his work with countless hip hop, pop, and R&B icons, ReMi has been hugely influenced by Marvin Gaye and was honored by the opportunity to reimagine these multi-generation defining tracks. Instead of re-interpreting the sacred title track, he shifted focus onto "Save the Children," and the B-side "Sad Tomorrows," an early version of "Flying High (In the Friendly Sky)," as well as the timeless holiday cut, "I Want to Come Home for Christmas," and an unreleased Marvin Gaye instrumental, "No Need," taken from the "Sad Tomorrows" sessions. He also went a step further and contributed visually to the remix suite, creating a celebratory illustration for the album cover art.
Connecting these tracks with masterfully crafted transitions to mirror the original concept album flow of What's Going On, his interpretation of "Save The Children" magnifies the song's natural rhythm and groove, giving way to his sleek and dynamic remix of "Sad Tomorrows," which in turn leads gracefully into Marvin's impassioned "I Want To Come Home For Christmas," which also recently debuted its first ever music video. Closing the suite, ReMi's re-imagining of the instrumental "No Need" encapsulates Gaye's poignant artistry, honoring his warm tones, swirling soundscapes, and passionate melodies.
Marvin Gaye & Salaam Remi

In The Groove (Remastered)

How Sweet It Is To Be Loved By You (Remastered)

In Our Lifetime? (Remastered)

A Tribute To The Great Nat King Cole (Remastered)

Let's Get It On (Remastered)

Live! At The London Palladium (Remastered)

I Want You (Remastered)

That's The Way Love Is (Remaster)

Marvin Gaye
Brilliant, enigmatic, and headstrong, Marvin Gaye was an innovator. In 2009, he would have been 70 years old, and it has been 25 years since his tragic death. But today Marvin remains as influential and exciting as ever: Rolling Stone recently named him one of the greatest singers of all time.
He was born Marvin Pentz Gay Jr. on April 2, 1939, in Washington, D.C., where he dreamed of singing before large crowds; he joined a co-founded a local doo-wop group, the Marquees, who were spotted by Harvey Fuqua, who made them his new Moonglows. Marvin arrived in Detroit on tour with the Moonglows and stayed, as did Harvey, and Marvin was signed to Motown just based on raw singing talent. He was also a songwriter, an OK drummer-and handsome as hell. He wanted to sing jazz, to croon Tin Pan Alley standards, but that didn’t pan out. Motown founder Berry Gordy encouraged Marvin to sing R&B, and once Gaye sang the soulful (and autobiographical) “Stubborn Kind Of Fellow” in 1962, stardom enveloped him. The incendiary “Hitch Hike,” “Pride And Joy,” and “Can I Get A Witness” sold like crazy in 1963, and Marvin oozed silky sexiness on the 1965 classics “How Sweet It Is (To Be Loved By You),” “I’ll Be Doggone” and “Ain’t That Peculiar.”
By 1968′s immortal “I Heard It Through The Grapevine,” and on a series of electrifying duets with Mary Wells, Kim Weston (“It Takes Two”), and his ultimate singing partner, the ravishing but ill-fated Tammi Terrell (“Ain’t No Mountain High Enough,” et al), Gaye was a commercial force. He soon became recognized as an artistic one as well.
At decade’s turn, Marvin seized full control of his output with the deeply personal, socially aware 1971 masterpiece What’s Going On, which produced three hit singles: the title track, “Inner City Blues (Make Me Wanna Holler)” and “Mercy Mercy Me (The Ecology).” He defied expectations again with “Trouble Man,” a 1972 hit single featured in his haunting, jazzy score of the movie of the same name. He zoomed to the top of the charts with his passionate Let’s Get It On, while delivering a pop confection in Diana and Marvin, his duet album with Motown’s queen, Diana Ross. I Want You, released in 1976, was another sensual masterwork, a meditation on obsessive love that was also No. 1. Marvin made his personal life public through his songs, and it was never more evident in 1978′s Here, My Dear, a sprawling double-album chronicling his divorce from Anna Gordy, Berry’s sister. Even his No. 1 dance classic from 1977, “Got To Give It Up,” a studio cut added to flesh out the double-LP Live At The London Palladium, was about the singer’s reluctance to get loose on the dance floor.
Marvin left Motown in 1981, with the politically tinged album In Our Lifetime. He fled to London, then Belgium, where he created for Columbia Records “Sexual Healing,” his first Grammy® winner. But another hit was not salvation from his demons. On April 1, 1984, one day before his 45th birthday, Marvin was shot to death by his father.
Marvin’s influence reaches across the generations. He was rightfully among only the second group of artists honored with induction into the Rock and Roll Hall of Fame, in 1987. More recently, Marvin was No. 6 on Rolling Stone’s list of the 100 Greatest Singers Of All Time. “Motown Week” on American Idol 2009 (Season 8) featured remaining contestants singing not one but two of Marvin’s songs. His records-and his ringtones and his DVDs-are still going gold.