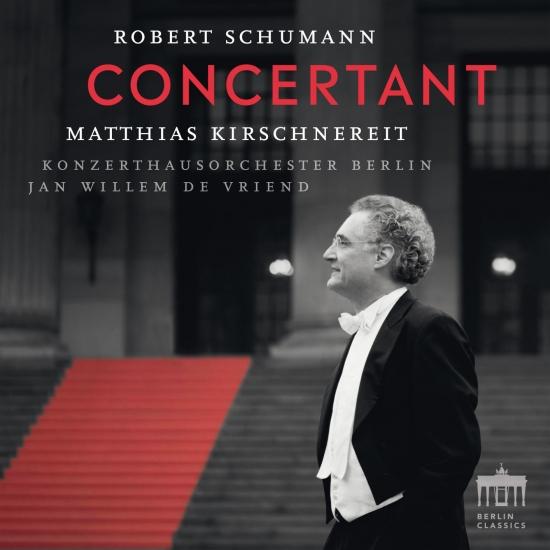 It's a perfect match: Matthias Kirschnereit, the "Poet at the Piano" (according to Süddeutsche Zeitung), and the Konzerthausorchester Berlin under Jan Willem de Vriend play Schumann's large-scale work for piano and orchestra. All of the musicians are experienced, skilled artists and they have produced a performance clearly based on knowledge of the work and musical experience. The album's concept is impressive: Schumann's Piano Concerto, the most frequently recorded work in the history of the CD, is presented as the highlight, but also as a sort of encore after the three lesser known Concert Pieces opp. 86, 92 and 134.
Though we cannot be sure who set the Concert Piece for piano and orchestra op. 86, originally conceived for four horns and orchestra, it is clear that Schumann had something really large-scale and splendid in mind. "And I am convinced that the work's infectious energy has transferred to the piano transcription, indeed, that the piano version brings out new facets," explains Kirschnereit. Just 10 days before the Konzertstück op. 86, another work was premiered which Kirschnereit, together with the KHO and de Vriend, has recorded on Concertant: the Introduction und Allegro op. 92 – "a work that is all of a piece," as Kirschnereit sees it. "Eusebius brings the the introduction to a close in an intimate, questioning manner, and then Florestan enters, tempestuously and recklessly, taking charge in the Allegro appassionato." Matthias Kirschnereit simply does not understand why the work is so seldom performed, since it represents pure, unadulterated Schumann. Robert Schumann's wife Clara thought very highly of the Konzertstück op. 134; indeed, he originally dedicated it to her, but when he met Johannes Brahms he struck through the dedication to Clara Schumann and replaced it with the name of the young man from Hamburg. For Kirschnereit that is a sure sign of how highly the composer rated his work. And when, after the cadenza, the trombones intone the church hymn "Du meine Seele singe", the pianist who grew up in a clergyman's house is gripped by deep emotions.
Clara Schumann performed the Piano Concerto op. 54 composed by her husband some 190 times. For many years she yearned for him to write her a "virtuoso concerto" with which she could shine on the European stage. Schumann completed the work originally planned as a one-movement fantasia in 1845. "For us, the focus was to adhere to the kinetic energy, the fiery stringency of the work," says Matthias Kirschnereit. For many years now, he has been rated one of Germany's most successful pianists. His previous album, "Frei aber einsam" featuring recordings of works by Brahms, was recently acclaimed by critics and music-lovers alike. He has been successfully associated over many years with his musical partners on the Concertant album. Matthias Kirschnereit and the Konzerthausorchester Berlin under Jan Willem de Vriend have produced an album full of calm virtuosity, authentic insights and an ardent passion for Robert Schumann on "Concertant".
Matthias Kirschnereit, piano
Konzerthausorchester Berlin
Jan Willem de Vriend, conductor