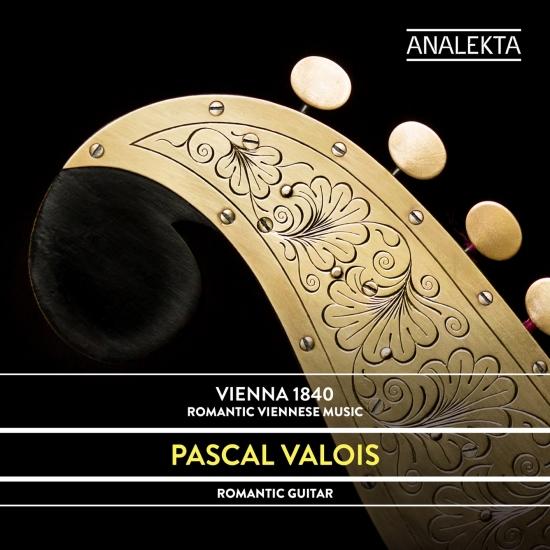 The second half of the 19th century was an erawhen musicians valued the evocation of the fantastic and the expression of passion above all else. They did not hesitate to manipulate and reshape musical frameworks through a wide variety of expressive techniques such as rubato (modifying rhythms and varying pulsation), portamento (expressively sliding between notes), arpeggiation, adding appoggiaturas and trills, and improvising musical transitions. For the recording of Vienna 1840, Pascal Valois set out to rediscover these manners of expression as they existed in the Germanic Romantic period. For this same reason, he used a replica of an 1830 Viennese guitar by luthier Johann Georg Stauffer (1778–1853).
Guitar music from the mid-19th century represents the swan song of “Guitaromanie,” (a 19th-century term from a collection of works by guitarist Charles de Marescot), and the period produced a wealth of musical treasures. In the 1840s, Hungarian guitar virtuoso Johann Kaspar Mertz (1806–1856) was at the height of his craft and pushing the limits of the instrument. In the Barden-Klänge (Bard Songs) collection, Op. 13, Mertz uses a profusion of expressive techniques to evoke the sound of the surf in a seaside cave (“Fingals-Höhle”), a singer’s vocalises (“Lied ohne Worte” and “An Malvina”), or the mood of an evening in the countryside (“Abendlied”). In his Hungarian Fantasy No. 1, Op. 65, Mertz perfectly illustrates the Hungarian style, a musical idiom that was all the rage in the mid-19th century. And it was Mertz himself who wrote the guitar arrangement for “Ständchen,” the famous Franz Schubert (1797–1828) lied featured on this album.
Swiss-born guitarist Giulio Regondi (1822–1872) never lived in Vienna, but the influence of Austrian and German composers on this child prodigy is undeniable. In his Rêverie, Op. 19, a technical tour de force for the guitar, he depicts the stages of a dream – from nightfall, to sleeping, to dreaming – in the purest Romantic musical tradition.
Daughter of the famous guitarist Mauro Giuliani, Emilia Giuliani Guglielmi (1813–1850) bequeathed us a formidable body of work that unquestionably merits inclusion in the repertoire of today’s guitarists. Her Six Preludes, Op. 46, were published in Vienna in 1840 and feature remarkably brilliant and imaginative writing.
“But truly, there remains much to be read between the lines, which no composer can convey by signs and no editor by explanations.” – Carl Reinecke
Pascal Valois, guitar 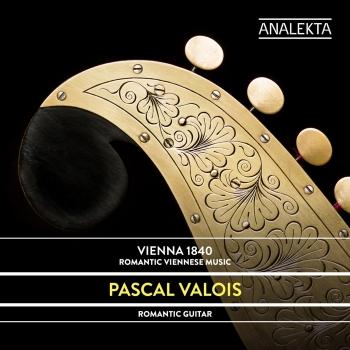 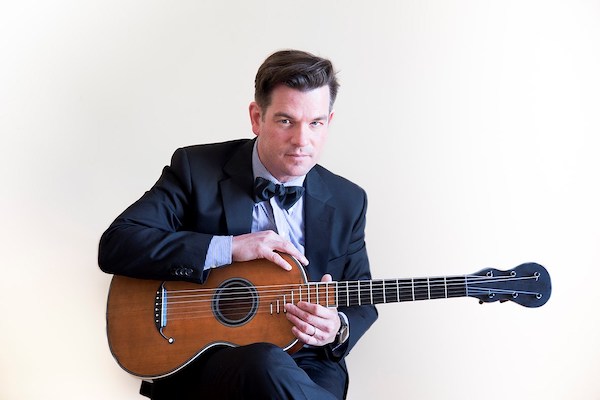 Pascal Valois
is dedicated to reviving enthusiasm for the guitar scene during the Romantic era. He performs music from the nineteenth-century repertoire by using various period instruments, ornamentation, stylistic practices of the period, as well as improvisation, which was customary in that era.
After graduating with honours at the Conservatoire de musique de Montréal under Jean Vallières, and receiving the award Pierre J. Jeanniot during his studies at Université du Québec à Montréal with Alvaro Pierri, Valois studied romantic guitar with Hopkinson Smith at the Schola Cantorum Basiliensis and with David Starobin in New York. He has also received a doctorate in Performance Practice from Université Laval. Recently, he has played in Basel, Paris, Riga, San Francisco, New York, Ottawa, and Toronto. He has been a soloist with many ensembles, among them Rigas’s Ensemble Samsara and Montreal’s Les Idées Heureuses. He has also given master-classes in many institutions, including the Manhattan School of music, the San Francisco Conservatory, and the Conservatoire de musique de Montréal.
Pascal Valois has received the most renowned bursaries in Canada for guitar performance (Canada Council for the Arts) as well as Musicology (FQRSC and SSHRC). He has also been awarded scholarships from the Desjardins Foundation, the Wilfrid-Pelletier Foundation, the Laval University Foundation, and the Université du Québec à Montréal Foundation.