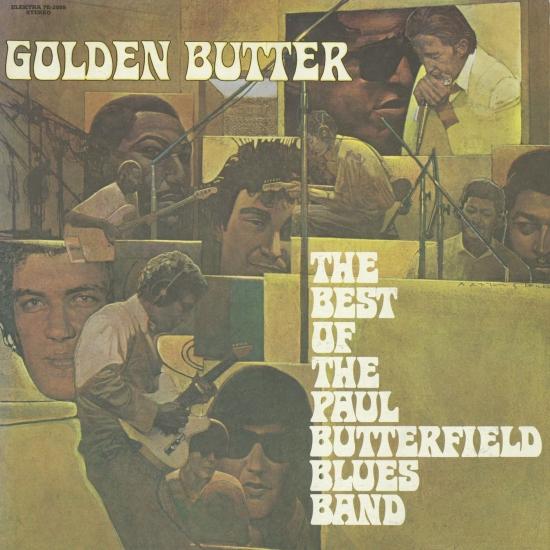 Though their luster had faded by 1972, the Paul Butterfield Blues Band had already earned their measure of immortality by first popularizing and then pushing the boundaries of the blues. This influential outfit recorded two acknowledged classics, their eponymous debut and the subsequent East-West, which account for the first two sides of Golden Butter.
Here you'll find the straight-ahead Chicago blues of their debut ('Born in Chicago,' 'Mellow Down Easy,' 'Look Over Yonders Wall') and the prescient psychedelic blues-rock of their second effort ('East-West,' 'Mary, Mary'). The last two sides of this compilation draw from the Elektra anthology What's Shakin' ('Spoonful,' 'One More Mile'), a pair of tracks each from their third and fourth albums, and a song from each of their last three albums. Delivered in chronological order, Golden Butter offers an accurate miniature of the band's unraveling from blues ambassadors to innovators to increasingly irrelevant icons. Yet if the band's fire burned briefly, it burned brightly, casting a shadow that remained visible throughout the decade in the music of Cream, Steve Miller Band, and many others. And even toward the end of their career, the band had an authentic understanding of the blues that few could match (a point underscored here with a live version of 'Driftin' and Driftin'').
Golden Butter has yet to be released on CD, Elektra electing instead to release a new double-disc retrospective, An Anthology -- The Elektra Years. Both compilations are good enough to plant the seeds of hero worship in listeners' heads and spur them on to dig deeper into Butterfield.“ (Dave Connolly)
Paul Butterfield, vocals, harmonica
Michael Bloomfield, guitar
Elvin Bishop, guitar
Mark Nataflin, keyboards
Jerome Arnold, bass
Sam Lay, drums
Digitally remastered