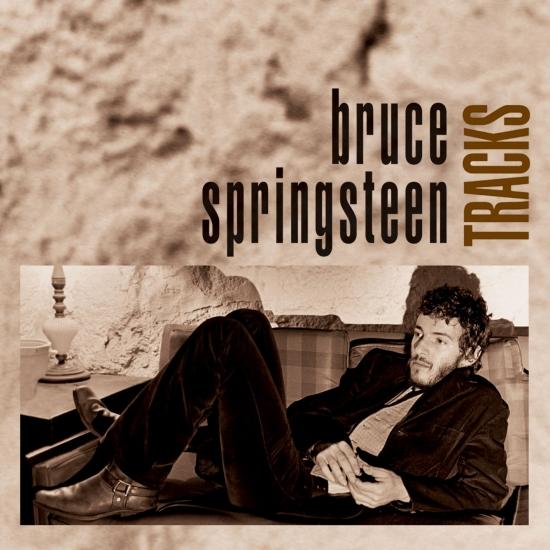 Tracks is a four album set by Bruce Springsteen, released in 1998 containing 66 songs. This box set mostly consists of never-before-released songs recorded during the sessions for his many albums, but also includes a number of single B-sides, as well as demos and alternate versions of already-released material.
"For all Tracks' padding, it is disarming to hear rock delivered with such unbridled earnestness and positive energy, gleefully drunk on its own power to elevate musicians and audiences alike." (Entertainment Weekly)
"Next time you find yourself debating the worth of Bruce Springsteen, pull out this brilliant four-disc outtake set. With a flick of his grease-monkey wrist, Springsteen proves--simply by issuing long-unreleased material--why he's the most consistent (read: important) composer in the pop-rock field of his generation. It's there in a dozen included B-sides ("Pink Cadillac," "Shut Out the Light," "Janey Don't You Lose Heart"). It's there in countless rabble-rousing anthems, the singer's stock in working-class trade ("Roulette," "Stand on It," "Car Wash," "Brothers Under the Bridges"). But, mainly, it's there between the lines, in the small idiosyncrasies Springsteen detected within almost every cut that made him--until now--withhold this material. Some are glaringly obvious--the singsong "Living on the Edge of the World," whose lyrics were later lifted for the more sinister "Open All Night"; the morphing of several "Iceman" verses into sentiments expressed on Darkness on the Edge of Town. Some are collectible curiosities, like the starkly disparate alternate takes of "Stolen Car" and "Born in the U.S.A." And others are more meticulous, often coming down to a simple phrase, riff, or melody line that wound up flunking final-cut muster. And when you stumble across those tiny, fleeting moments, moments that would matter to only a true perfectionist, the true artistry of Springsteen unfurls in all its ragged glory." (Tom Lanham)
Digitally remastered