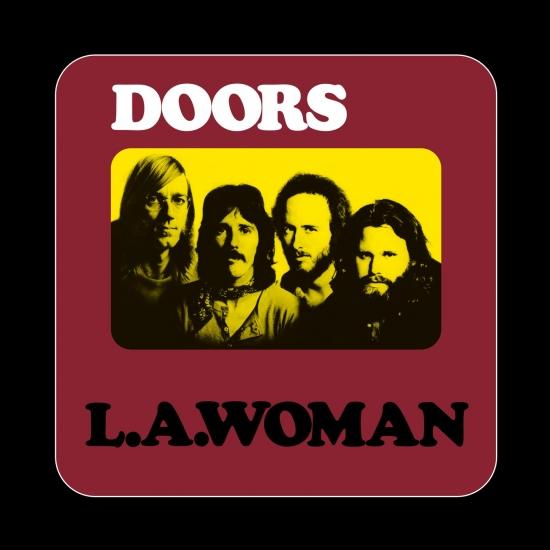 Newly remastered! Besides being heavy in their early days the Doors were funny too. Funnier than a fish. Who can ever forget those great Morrison ad libs like the one he once did during a lull in 'Gloria' ('Little girl how old are you. little girl what school do you go to, little girl suck my cock')? He was an earnest drinker, which of course helped. Now he's drinking more than ever, hence there's some material basis for all the laughs. And since heaviness has been kicked in the ass of late all the kickers owe it to themselves to sit down with this one. There isn't one serious cut on the entire album.
Just consider the extent to which Jimbo's snake and lizard obsessions contributed to the wanton slaughter of zillions of members of the earth's reptile population for the sake of boots and belts. His influence on that and other fashion trends has to be considerable, an absurd fact considering how the man himself has been literally abandoned by the hippos of rock fandom during his darkest hours. Well now he's taking no chances about being taken seriously or with universal import. In fact he's not even writing his own snake lyrics anymore. Instead there's John Lee Hooker's 'Crawling King Snake.' a whopper of a readymade and proof positive that he and his boy, are still listening to the roots, even after the death of Al Wilson (don't forget that Canned Heat was once L.A.'s number one comedy band. On it Morrison demonstrates his final grasp of all the vocal chicanery only hinted at in flashes on 'Love Street.' Which means he's finally found complete security in caution-to-the-winds Hollywood lemonade singing, the mid-point between bubble gum and a good chance at being invited to sing an Oscar nomination at the 1972 Academy Awards.
And he's even a fair-to-middlin' blues gomper because for the first time he honestly doesn't give a donut about how authentic or any of that the whole thing sounds. He was never actually Fric Burdon but his trans-racial bravado at least hinted at some intent in that direction. Now all the cards are on the table. Just check out 'Cars Hiss by My Window' and compare it to the halfassed blues attempts of fellow Southern Californian Captain Beefheart and see who's got the greater vestige of potentially galling pretentiously indulgent self-esteem. (If you don't admit it's the noble Captain then you can't have much of a sense of either humor or fair play.)
And what's more Jim's backup band has finally reduced its approach to one of ping-ponging the essential free-as-air spirit the man's been toying with ever since be abandoned Howlin' Wolf for Mel Torme. In other words the Doors have never been more together, more like the Beach Boys, more like Love (the band they originally played second fiddle to at the Whiskey or the troubadour or wherever it was). So when it's Morrison setting the tone with lines like 'Why did you throw the jack of hearts away?' on 'Hyacinth House,' it's Manzarck, Robbie and Densmore keeping the second-to-second ridiculousness going on and on with merrygoround tirades of utter mere pleasantness straight out of Derek and the Dominoes with even some Kokomo-classical fancy stepping thrown in for good measure. In terms of what they're after here the Doors as a band never falter and there isn't one bummer cut on the entire album obviously a first for them.
It's also the first time since 'The End' and 'When the Music's Over' that they've been able to pull off anything interesting in the way of long cuts. And there are two of them here, 'L.A. Woman' (with maybe the best Chuck Berry riffs since the Stones and a hell of a lot more Sixties Seventies American flavor) and 'Riders on the Storm' (signaling the return to Del Shannon from whence the Doors' mysterioso-hood was largely derived to begin with), both of them minor monsters. And I'll be a monkey's uncle if 'The WASP (Texas Radio & The Big Beat)' doesn't showcase Morrison's finest command of spoken jive to date, far superior to 'Horse Latitudes' and a demonstration of lyric-supporting timing at least the equal of George Burns in his prime.
You can kick me in the ass for saying this (I don't mind): this is the Doors' greatest album and (including their first) the best album so far this year. A landmark worthy of dancing in the streets. (Bobert Meltzer, Rolling Stone)
Jim Morrison, vocals
Robby Krieger, guitars
Ray Manzarek, organ & piano
John Densmore, drums
Guests:
Jerry Scheff, bass (Tracks 1, 2, 3 and 5)
Marc Benno, rhythm guitar
Produced by Bruce Botnick & The Doors
Digitally remastered
Rolling Stone '500 Greatest Album of All Time' #362