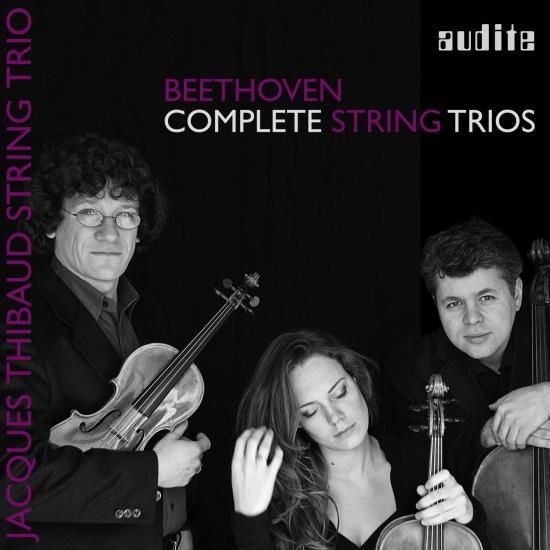 Following the successful release of String Trios by Cras, Reger, Dohnányi and Kodály (aud. 97.534), the Jacques Thibaud String Trio are now turning towards a Classical composer, with a new audite complete recording of the Beethoven String Trios.
It is not always clear why certain genres make it into the pantheon of musical history, whilst others remain 'insiders' tips'. The string quartet undoubtedly belongs to the former category, whilst the string trio - despite brilliant works such as Mozart's Divertimento K563 or the Beethoven String Trios - forms part of the latter. The trio formation consisting of a violin, viola and cello is generally deemed to produce a thin sound and to have been neglected by composers. With Beethoven, however, the opposite is true: for the young Beethoven, the trio was a touchstone of his mastery of this form 'without piano', in which he found himself as a composer.
He left five trios in all, in Opp. 3 and 8 turning towards the traditions of the divertimento and the serenade, whilst producing new and sophisticated reinterpretations of these forms. His Trios Op. 9, written in 1796-98, became his calling card as a composer for string instruments. All the characteristics of the mature Beethoven can be found here: astonishing sonorities; a sense of the character and personalities of the three instruments; using few, concise themes; drama and sensuousness.
„A new set of Beethoven's string trios is always a welcome event, and this one, by a group named after one of the greatest of all chamber musicians, is a useful addition to the catalogue. In the Op 8 Serenade the Jacques Thibaud Trio capture well the outdoorsy character, particularly in the uproarious March, while the voicing in the second movement is judged to a nicety. By comparison, the Leopold and Zimmermann trios are more unbuttoned still.
I like, too, the tempo the Thibaud Trio choose for the first movement of Op 3, which is faster than some (though Trio Zimmermann are fleeter still), giving Beethoven's abrupt changes of mood a sense of complete inevitability. They capture the changeability – and sheer sparkle – of the opening Allegro of Op 9 No 1 very well, relishing the drama of the development section. But turn to Trio Zimmermann and you get playing that is even more reactive, particularly effective in their ability to fine down their tone to near-inaudibility. In the Scherzo I found the LeopoId Trio's more refined tone particularly alluring, the new version sounding a touch thick-toned by comparison. And in the Presto finale it's the Trio Zimmermann who really fIy, combining precision engineering with a glorious airiness that the Thibaud can't quite match.
Beethoven ends the last of the Op 9 trios with another Presto, though utterly different in mood than that of the G major and given with due drama by the Thibaud Trio. In between is a warm reading of the D major Trio, the group revealing the first movement's conviviality and the touching pathos of the Andante. Audite has given them a suitably naturalistic recording. If Trio Zimmermann is too extreme for your tastes, the Thibaud Trio may well appeal.“ (Gramophone)
Jacques Thibaud String Trio 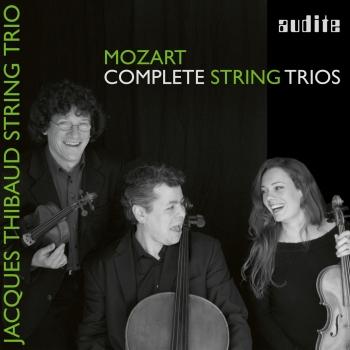 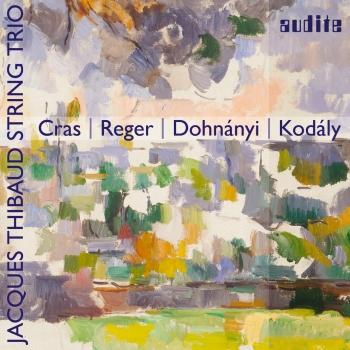 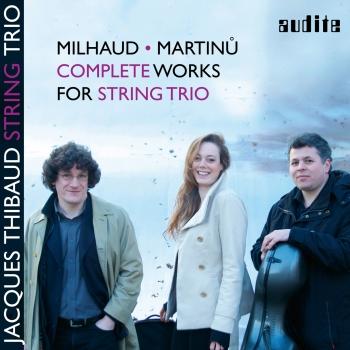 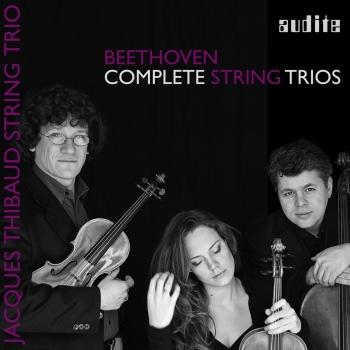 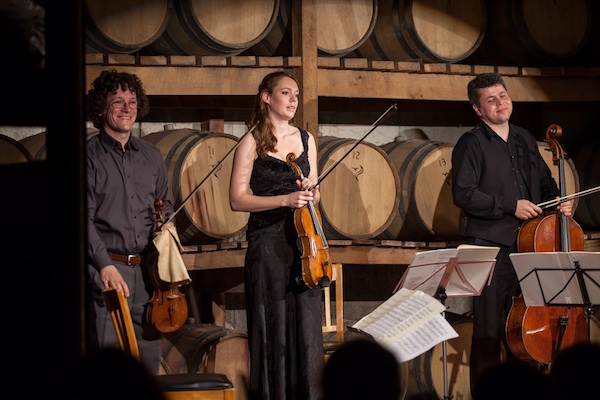 Jacques Thibaud String Trio
Burkhard Maiß, Bogdan Jianu and Andrei Banciu have been playing together since 2002 when Andrei Banciu started concertizing with the Jacques Thibaud String Trio.
After playing the piano quartet repertory together for so many years it seemed to be natural to concertize as a piano trio and spend more time with the great trios by Haydn, Mozart, Beethoven, Mendelssohn and many others, combining them in their programms with string trios and piano quartets.
The founders of the ensemble Burkhard Maiß, Bogdan Jianu and Andrei Banciu have all established their reputations through successful performances throughout Europe, Asia, Scandinavia, South America, the United States and Canada. They could be heard in such famous venues as the Wigmore Hall, Carnegie Hall, the Concertgebouw, the Mozarteum, Maison de Radio France and the Berlin Philharmonie.
As inspiration, the musicians have chosen the name of the French violinist Jacques Thibaud, who, beside his career as soloist was a world-famous chamber musician who next to traditional works, premiered many new and unknown compositions. He performed, for example, the now famous works of Debussy and Szymanovsky, working closely together with the composers.
Prize-winners in the prestigious 1999 Bonn Chamber Music Competition, the Jacques Thibaud String Trio was founded at the Berlin School of Art in 1994. Since then, the ensemble has performed throughout Europe, Japan and North America, receiving tremendous acclaim from audiences and critics alike.
Calling their playing “spontaneous and commanding,” the New York Times said, “this could be the first string trio in some time to have a major career.”
In December 2005, the trio gave five performances in San Francisco and other west coast cities of Mozart's rare, unfinished Sinfonia Concertante for Violin, Viola, Cello and Orchestra with the San Francisco Chamber Orchestra.
With their charm, youthful exuberance and astounding virtuosity, the Trio has delighted audiences of all ages in large and small venues. In the U.S., they have appeared at Lincoln Center’s Alice Tully Hall, New York City’s Frick Collection (twice), Washington DC’s National Gallery, hundreds of other venues including Stanford University, the Caramoor Festival, the Cleveland Museum of Art, and cities including Boston, Los Angeles, Chicago, Pittsburgh, San Francisco, San Diego, Milwaukee, Houston, Dallas, San Antonio, Memphis, Indianapolis, Phoenix, Tucson, Salt Lake City and Honolulu. As Ensemble-in-Residence at the 2001 Florida International Festival, they drew an audience of over two thousand to their final concert. They have also given successful residencies in a settings ranging from conservatories to music camps to an Indian reservation in Arizona.
Internationally, the Trio has appeared at London’s Wigmore Hall, throughout Germany, in major Japanese cities on several tours, and at some of Europe’s most prestigious festivals including Belgium’s Musica Mundi, Gidon Kremer’s Echternach Festival in Luxembourg, and Denmark’s Roskilde Schubert Festival.
In 2009 they played a gala –concert for the German embassy in Paris at Palais Beauharnais in Paris.
Recent performances included concerts in Germany (Berlin) , Belgium and Netherlands (Amsterdam.)
The trio consists of Burkhard Maiss, Hannah Strijbos and Bogdan Jianu.