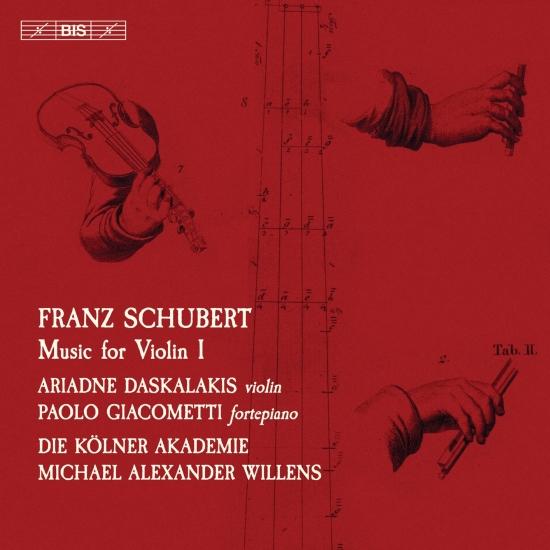 Violin music isn’t what one normally associates with Franz Schubert, but he did in fact receive his first violin lessons as a young boy from his father. At the age of 11 he was accepted as a member of the choir of the imperial court chapel, and as such became a pupil at the Stadtkonvikt School. There he joined the excellent student orchestra, eventually assuming the role of leader. Among his examiners was the court Kapellmeister Anton Salieri, who took a keen interest in Schubert’s compositions. Schubert left the school in 1813, but continued working with Salieri for a few years longer, possibly on some of the pieces recorded here – the Rondo, Konzertstuck and G minor Sonata all hail from 1816 while the Polonaise is from the following year. These early, unpretentious violin compositions were probably intended for Schubert’s older brother Ferdinand, who led the family string quartet in which Franz played the viola. Composed in 1827, when Schubert had already written his symphonies, string quartets, piano sonatas and hundreds of songs, the closing Fantasy in C major is another matter. A substantial piece in four sections, it contains challenging writing for both instruments, demonstrating what a master Schubert himself was on both. On this and its soon-to-be-released companion disc, Ariadne Daskalakis has gathered all of Schubert’s works for violin. Equally at home on baroque and modern instruments, she has chosen to perform them in a historical context, joined by Paolo Giacometti on a fortepiano by Salvatore Lagrassa from c. 1815 and the period band Die Kölner Akademie conducted by Michael Alexander Willens.
Ariadne Daskalakis, violin
Paolo Giacometti, fortepiano
Kölner Akademie
Michael Alexander Willens, conductor 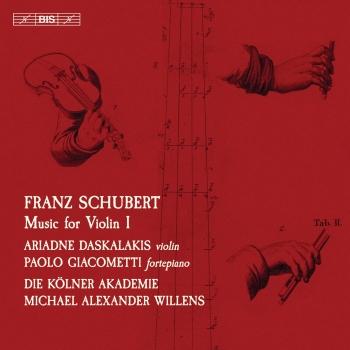 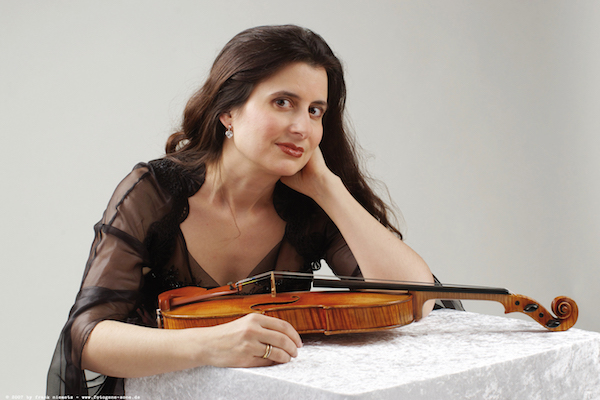 Ariadne Daskalakis
is critically acclaimed for her expressive sound and her stylistic versatility. At home on the international stage, she has performed in venues ranging from Boston's Jordan Hall and Gardner Museum and New York's Carnegie Recital Hall to the Gulbenkian Center in Lisbon, the Théâtre des Champs-Elysées Paris, the Rudolfinum Prague, the Cologne Philharmonic Hall, the Dortmund Konzerthaus, the Munich Herkules Hall and the Berlin Philharmonie and the Athens Megaron. In recent seasons she appearanced with Concerto Köln, the Dortmund Philharmonic and the New Bedford Symphony Orchestra, and gave repeat performances with the Cologne Chamber Orchestra and the New Rhine Chamber Orchestra. She has further appeared as soloist with the Munich BR Radio Symphony Orchestra, the Academy of Ancient Music Berlin, the Kammerakademie Potsdam, the English Chamber Orchestra, the Athens National State Orchestra and the Cologne Sinfonietta. In the dual role of leader and soloist Ariadne Daskalakis has collaborated with the Stuttgart Chamber Orchestra, the Prague Chamber Orchestra, the Cologne Chamber Orchestra and the Ensemble Oriol Berlin. She was hailed by German MDR Radio as a “universal specialist” for her recording of Vivaldi Concerti with the Stuttgart Chamber Orchestra on the label Tacet. Benjamin Dunham of Early Music America wrote of her Biber Sonatas: "With this release, Daskalakis propels herself into the front rank of historical violinists."
Ariadne Daskalakis won prizes at the International ARD-Munich Competition, the St. Louis Symphony Strings Competition and from the Mozart Society Dortmund, the Harvard Music Association and Framingham State University, which awarded her the first Christa McAuliffe Medal. An avid chamber musician, she led the Manon Quartet Berlin for 10 years. She performs regularly as recitalist or, on baroque violin, with her Ensemble Vintage Köln, with which she recently recorded the complete Rosary Sonatas by Biber for the label BIS.
Numerous recordings document the unusually broad spectrum of her repertoire and the rich depth of her musical experiences. These include the Complete Violin Sonatas by Handel, Fauré and Raff, Violin Concerti by Tartini and 20th century works by Lutoslawski, Janacek and Szymanowski (on the labels Naxos, Carpe Diem and Tudor). Her Handel and Tartini recordings were both Selections of the Month in the The Strad magazine. Recent recordings with period instruments present sonatas by Ferdinand Ries and violin concerti by Jan Kalliwoda on the label cpo.
Ariadne Daskalakis also collaborates with composers, exploring new music and genres, like Caspar Johannes Walter’s Violin Concerto Zeichnungen and Christoph Coburger’s “Opera Mono” Herr K und Frau N, a staged solo work with video installation. With the Academy of Ancient Music Berlin she performed as soloist in the Vivaldi Four Seasons in “4x4”, in which dancer Juan Kruz Diaz de Garaio Esnaola choreographed the soloist and the whole ensemble.
A former student of the New England Conservatory Preparatory School, Ariadne Daskalakis enjoyed an education in music and humanities at the Juilliard School, Harvard University and the Hochschule der Künste Berlin. She is Professor at the Hochschule für Musik und Tanz Cologne and has taught as guest at the Juilliard School, the Eastman School of Music and various other international institutions and festivals. She has served on the juries of the ARD International Music Competition, the Isang Yun Competition and the Cologne International Music Competition (as Jury Chair).
Former students have positions in fine orchestras including the WDR Symphony and WDR Rundfunk Orchestras Cologne, the Orchestre Philharmonique de Luxembourg, Leipzig Gewandhaus Orchestra, the Beethoven Orchestra Bonn, the Aachen Opera and the Karlsruhe State Theatre. Prizes have been awarded to her students at international competitions in Germany, Italy, Spain and Japan.
In 2012 Ariadne Daskalakis founded “Music from Land’s End,” an international summer chamber music festival in Wareham, Massachusetts. In 2015 she has been named Artistic Director of the European Academy for Music and Art Palazzo Ricci Montepulciano.