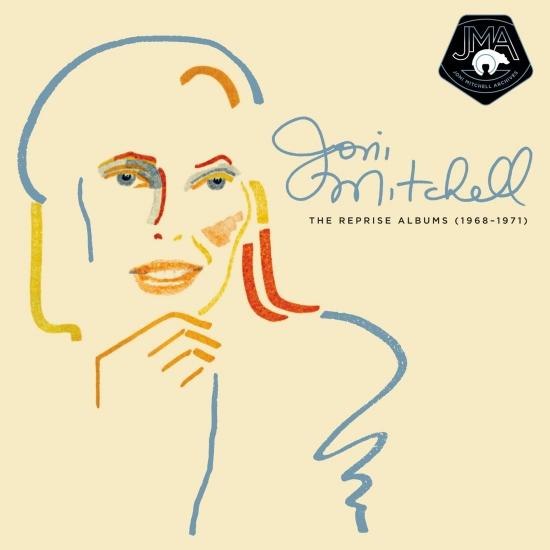 Newly Remastered! The Joni Mitchell Archives series continues with a celebration of the 50th anniversary of BLUE. THE REPRISE ALBUMS (1968-1971), features newly remastered versions of BLUE and the three albums that came before it: SONG TO A SEAGULL, CLOUDS, and LADIES OF THE CANYON. The original mix of SONG TO A SEAGULL has been recently updated by Joni and mixer Matt Lee.
On June 22, 1971, Joni Mitchell released Blue, concluding her prolific four album run for Reprise Records with an album considered by many to be one of the greatest of all time. Its stirring, confessional songs have been celebrated by music lovers and critics alike for decades while inspiring a wide variety of artists as diverse as Prince and Taylor Swift. Even today, its stature as a masterpiece continues to grow. Just last year, the album was named #3 on Rolling Stone’s list of the “500 Greatest Albums of All Time.”
To celebrate the album’s 50th anniversary, Rhino is releasing THE REPRISE ALBUMS (1968-1971), the next installment of the Joni Mitchell Archives series, featuring newly remastered versions of Blue (1971) and the three albums that came before it: Song To A Seagull (1968), Clouds (1969), and Ladies Of The Canyon (1970). In the case of Song To A Seagull, the original mix has been recently updated by Mitchell and mixer Matt Lee. “The original mix was atrocious,” says Mitchell. “It sounded like it was recorded under a jello bowl, so I fixed it!”
The cover art for THE REPRISE ALBUMS (1968-1971) features a previously unseen self-portrait Mitchell sketched during the time period. The collection also includes an essay by Grammy® winning singer-songwriter Brandi Carlile, another artist who’s been influenced greatly by Mitchell. She writes: “In my opinion Blue is the greatest album ever made. Blue didn’t make me a better songwriter. Blue made me a better woman… No matter what we are dealing with in these times we can rejoice and know that of all the ages we could have lived through, we lived in the time of Joni Mitchell.”
THE REPRISE ALBUMS (1968-1971) brings together the albums that helped establish Mitchell as one of the most-talented songwriters of her generation. It includes essential tracks like “River,” “Chelsea Morning,” “Both Sides, Now,” “Big Yellow Taxi,” “Woodstock,” and “The Circle Game.” Clouds, her second album, was certified gold and won the 1969 Grammy® (her first of nine) for Best Folk Performance. Ladies Of The Canyon and Blue were both certified platinum, while the latter was inducted into the Grammy® Hall of Fame in 1999.
THE REPRISE ALBUMS (1968-1971) will be followed later this year by JONI MITCHELL ARCHIVES VOL. 2, the second installment in the extensive archival series that began last year. Each one promises a deep dive into unreleased studio and live recordings from different eras of Mitchell’s storied career. VOL. 2 will focus on the timeframe when she recorded the albums included in THE REPRISE ALBUMS (1968-1971). Mitchell continues to be intimately involved in producing these collections, lending her vision and personal touch to every element of the projects. Future releases in the archive series will arrive in a similar manner, with a boxed set focused on studio albums from a specific era, followed by an official “Archives” release looking at unreleased audio from the same period.
Joni Mitchell
Digitally remastered
Please Note: This album consists of different sampling rates. See track list - behind each track is the sampling rate.