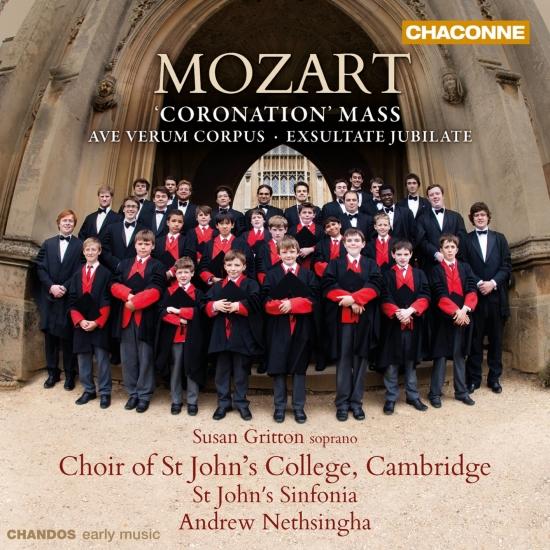 On this album, the Choir of St John’s College, Cambridge performs alongside four soloists and the period instrument ensemble St John’s Sinfonia. The tenor Sam Furness and bass George Humphreys both started their careers as Choral Scholars with this very choir. The mezzo-soprano Frances Bourne is in great demand on the concert platform and has sung with many of Europe’s leading conductors; the soprano Susan Gritton has amassed a vast discography that has earned her two Grammy nominations and includes, for Chandos, recordings of works by Haydn, Schubert, Mendelssohn, and Vaughan Williams.
Mozart wrote the ‘Coronation’ Mass just two weeks into his appointment as Court Organist for the Prince-Archbishop of Salzburg. As it was first performed as part of the Easter liturgy of Salzburg Cathedral, perhaps ‘Paschal’ Mass would have been a more suitable title. However, the work achieved great renown after its performance at the Imperial Coronation in Prague, which took place nine months after Mozart’s death, and the name stuck. The opulence of the Gloria, in particular, is unmistakable, and the alternations between soloists and choir add drama to the text, which Mozart scored with operatic clarity. Here the choir forcefully praises and glorifies, while the soloists more intimately bless and worship.
Also on this disc is Susan Gritton’s first-ever recorded performance of Mozart’s dramatic solo cantata Exsultate jubilate, and a motet for the Feast of Corpus Christi, Ave verum corpus. Mozart’s Church Sonatas, which number seventeen in all,span a period of ten years; because of their beauty and simplicity they achieved a much wider use, beyond the church and into the concert hall.
The Missa brevis, KV 192 highlights Mozart’s ability to write music for the church that was not significantly different in style to the music of the court or the opera house. This mass is known as the ‘Little Credo Mass’ because of the repeated interjections of the short ‘Credo’ theme throughout – a five-note motif which Mozart many years later would use as the main theme of the last movement of his final symphony.
“The vibrant colours of St John’s Sinfonia, a London-based period-instrument ensemble, punctuate lively singing from the men and boys of the Choir of St John’s College, Cambridge, under the baton of Andrew Nethsingha in sacred works of Mozart Chorus and soloists bring clarity and lightness to the composer’s earlier Missa Brevis, KV 192 and the small string component sounds nimble, especially in the thorny phrases of the Agnus Dei. Nethsingha highlights the harmonic shifts of the Sanctus, and each choral section brings special energy to the falling phrases of the Hosanna sections Rounding out the disc, Moxart’s ever popular Ave Verum Corpus receives a stately, sonorous reading” (Judith Malafronte, Opera News)
“Violinists Margaret Faultless and Simon Jones prove lively exponents of the two sonatas, with three-part continuo providing neat support. The vocal soloists, including soprano Susan Gritton skilfully match the direct intelligently shaped singing of the choir the sound throughout is solid, given a patina of warmth by the ideal acoustic resonance.” (George Hall, BBC Music)
Susan Gritton, soprano
Frances Bourne, mezzo-soprano
Sam Furness, tenor
George Humphreys, bass
Choir of St John’s College, Cambridge
Choir of St John’s Sinfonia
Andrew Nethsingha, conductor 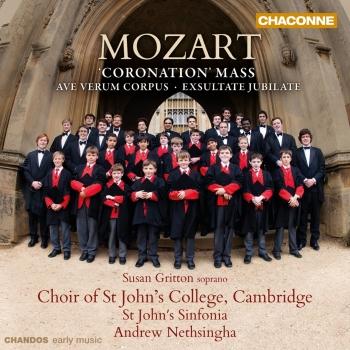 Susan Gritton
Winner of the 1994 Kathleen Ferrier Award, Susan Gritton is one of the most accomplished lyric sopranos of her generation, acclaimed for her versatility in roles ranging from Handel and Mozart to Britten, Janacek and Strauss.
After studying botany at Oxford and London Universities she moved her avocational voice training up to a professional level, then took up singing as a career. She joined Graham Johnson in the International Songmakers’ series, and made extensive appearances in recital throughout England, especially in summer festivals, appearing at the Lichfield, Arundel, Aldeburgh, Cheltenham, Harrowgate, and City of London Festivals, as well as in the Salzburg Mozartwoche. In 1996 she was invited to appear three times in the BBC Henry Wood Promenade Concerts. One of her early festival appearances was at the Istanbul Festival where she sang the part of Blondchen in Mozart’s Die Entführung aus dem Serail in the city where the story is set.
The first few years in her operatic career were in smaller and character parts, such as the First Niece in Britten’s Peter Grimes, Frasquita in Bizet’s Carmen, Clarine and Thalie in Rameau’s Platée, Xenia in Mussorgsky’s Boris Godunov, Sister Constance in Poulenc’s Dialogues des Carmelites, the Mermaid in Weber’s Oberon, and Tiny in Britten’s Paul Bunyan. She sang Belinda in Purcell’s Dido and Aeneas at the Berlin Staatsoper, the Governess in Britten’s The Turn of the Screw and Lucia in Britten’s The Rape of Lucretia in the Aldeburgh Festival under Steuart Bedford’s direction, Susanna in Mozart’s Le Nozze di Figaro and Zerlina in Don Giovanni for the Glyndebourne Festival and Touring Operas.
Gritton became known as a reliable recording artist early in her career. On the Tring label she sang the soprano part in Górecki’s Symphony No. 3 (Symphony of Sorrowful Songs), the part of Miss Wordsworth in the Collins Classics recording under Steuart Bedford of Britten’s Albert Herring, a set of Holst songs for the same label, Vivaldi’s Ottone in Villa on Chandos with Hickox conducting, several Purcell discs, sacred music of Handel and Handel’s Deborah and Occasional Oratorio with the King’s Consort on Hyperion, and, on Deutsche Grammophon, Handel’s Solomon (as the Queen of Sheba) and Messiah as well as Beethoven’s little-known Vesta’s Feuer.
Sam Furness
Described as having “all the makings of a star” in the Guardian and hailed as “a lyric tenor clearly going places” in Opera magazine, tenor Sam Furness has sung major roles for Scottish Opera, Garsington Opera and the Teatro Real, Madrid, always earning praise for his compelling acting and innate musicality.
In the 2021-22 season he sings Kudryas Katya Kabanova at the Teatro dell’Opera di Roma, Turiddu Cavalleria rusticana and Beppe Pagliacci at Åbo Svenska Teater, Turku, and Pang Turandot at Grand Théâtre de Genève. He also sings Mozart’s Vesperae solennes de confessore and Mass in C Minor with Hertfordshire Chorus in St Alban’s Cathedral.
Recent highlights include his house debuts at Grand Théâtre de Genève (Vitek The Makropoulos Case), Opernhaus Zürich (Albert Gregor The Makropoulos Case), and Theater an der Wien (Rodolphe Guillaume Tell); White King/Mad Hatter Alice’s Adventures Under Ground, Glass Maker Death in Venice, Novice Billy Budd and Simpleton Boris Godunov (Royal Opera House, Covent Garden); and Stravinsky’s Pulcinella with the London Philharmonic Orchestra.
George Humphreys
was born in Oxford and educated at St. John’s College, Cambridge, the Royal Academy of Music and the International Opernstudio Zürich. His recent Operatic appearances include Don Giovanni, Il Conte in Le Nozze di Figaro and Valentin in Gounod's Faust, all at the Salzburger Landestheater, Eugene Onegin at the Buxton Festival, Leporello in the Nederlandse Reisopera's production of Don Giovanni, and roles at English National Opera, Welsh National Opera, the Aldeburgh Festival and the Royal Opera House, Covent Garden. Recent concert highlights include Mahler Symphony No.8 with Daniel Harding and the Swedish Radio Orchestra, Bach's Weihnachts Oratorium with the Australian Chamber Orchestra, Dido and Aeneas at the Wigmore Hall, the Matthäus Passion at the London Handel Festival and performances of Handel’s Messiah with the Gabrieli Consort, the Orchestra of the Age of Enlightenment and the City of Birmingham Symphony Orchestra. He has given Lieder recitals at Lille Opera, Opernhaus Zürich, the Wigmore Hall in London and the Oxford Lieder Festival and he was recently made an Associate of the Royal Academy of Music in London. He is currently a member of the ensemble at the Salzburger Landestheater.