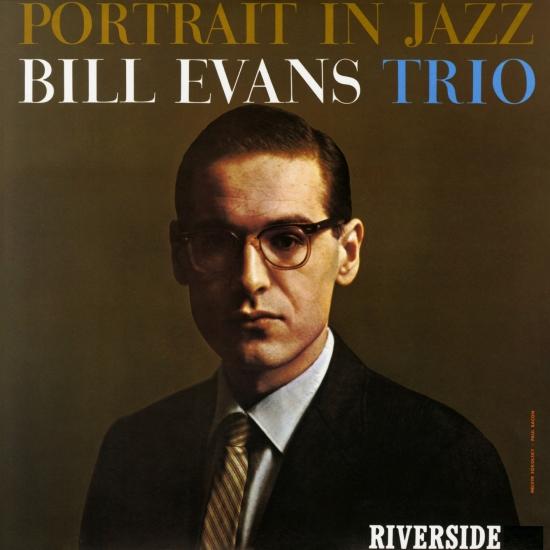 Bill Evans refused producer Orrin Keepnews' invitation to record a follow up album to his 1956 debut "New Jazz Conceptions" for over two years, stating that he had nothing new to say. He joined the Miles Davis quintet, participating in "Kind Of Blue", and took his time to plan his re-emergence as a leader in his own right. "Everyone Digs Bill Evans" marked that return in 1958 but it was "Portrait In Jazz", released a year later, that claimed his place at the forefront of jazz.
It is the first recording made by the now legendary trio of Bill Evans (piano), Scott LaFaro (bass) and Paul Motian (drums). The disc features two versions of "Blue In Green" developed for "Kind Of Blue" and it is revealing to note how the trio makes its own statement of the modal masterpiece crafted spontaneously by Miles Davis and Bill Evans in the original session. As Miles Davis noted: “Bill had this quiet fire that I loved on piano. The way he approached it, the sound he got was like crystal notes or sparkling water cascading down some clear waterfall.” And this is true again in the versions of "Blue In Green" here; time stands suspended, a profound, harmonic peace has settled, now the more remarkable in the paired down shape of the trio.
Bill Evans' chord voicings, adapted from Debussy and the impressionist composers, leave space that Scott LaFaro expertly and expressively fills. Bill Evans' own "Peri's Scope"and the Cole Porter standard "What Is This Thing Called Love" are stand out tracks from this point of view. Paul Motian's drumming is nicely in balance throughout. Overall, this is an almost perfect jazz trio album.
The trio had just two years together, peaking at the Village Vanguard sessions in 1961.
Weeks later, Scott LaFaro had been killed in a car crash, setting back Bill Evans' career and his music as much as his developing narcotic addiction.
„The first of two studio albums by the Bill Evans-Scott LaFaro-Paul Motian trio (both of which preceded their famous engagement at the Village Vanguard), this Portrait in Jazz reissue contains some wondrous interplay, particularly between pianist Evans and bassist LaFaro, on the two versions of "Autumn Leaves." Other than introducing Evans' "Peri's Scope," the music is comprised of standards, but the influential interpretations were far from routine or predictable at the time. LaFaro and Motian were nearly equal partners with the pianist in the ensembles and their versions of such tunes as "Come Rain or Come Shine," "When I Fall in Love," and "Someday My Prince Will Come" (which preceded Miles Davis' famous recording by a couple years) are full of subtle and surprising creativity. A gem.“ (Scott Yanow, AMG)
Bill Evans, piano
Scott LaFaro, bass
Paul Motian, drums
Recorded December 28, 1959 at Reeves Sound Studios, New York City
Engineered by Jack Higgins
Produced by Orrin Keepnews
Digitally remastered
Please Note: We offer this album in its native sampling rate of 44.1 kHz, 24-bit. The provided 96 kHz version was up-sampled and offers no audible value!