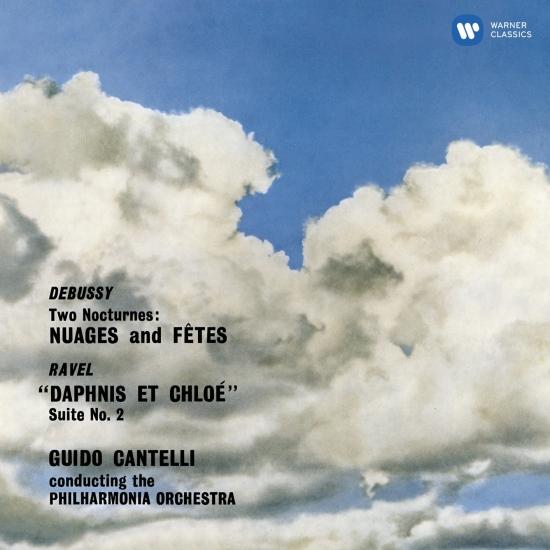 Newly remastered - These transfers come from a newly-acquired archive of the complete NBC broadcast recordings of Guido Cantelli, very gratefully received here at Pristine, which promises many further treasures to come. The two concerts form which the recordings were drawn took place a month apart at the start of 1952, and our source material was, by and large, excellent. If there is a slight difference in quality it is to be heard in the Shulman, where the upper treble is less well captured than in the two Tchaikovsky pieces.
The latter, by contrast, were excellent. Happily both concerts took place in Carnegie Hall, rather than the NBC studio from where Toscanini broadcast the majority of his NBC SO concerts. Thus we get the benefit of a much more sympathetic acoustic - something that really adds to these superb performances - rather than the dry and claustrophobic sound associated with the orchestra as heard in Studio 8H.
The audiences were exceptionally quiet, especially so in the second of the two concerts; occaisonal coughing and other unwanted noises have been removed from the Romeo and Juliet recording. I'm grateful once more to Keith Bennett for his insight and excellent notes to what is a fabulous Cantelli release. (Andrew Rose)
"The performances are fantastic and show why the loss of Guido Cantelli at the age of just 36 was such a crippling blow to the world of music" (MusicWeb International)
Philharmonia Orchestra
Guido Cantelli, conductor
Digitally remastered 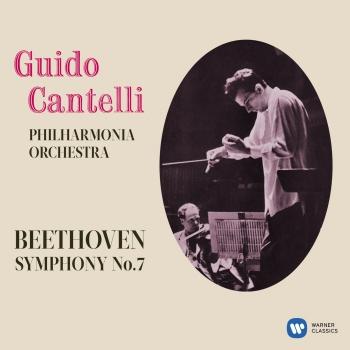 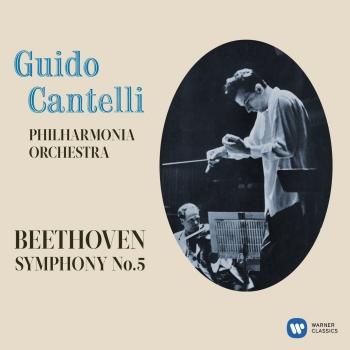 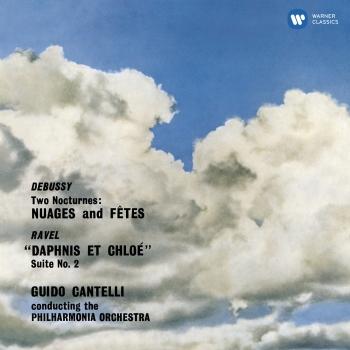 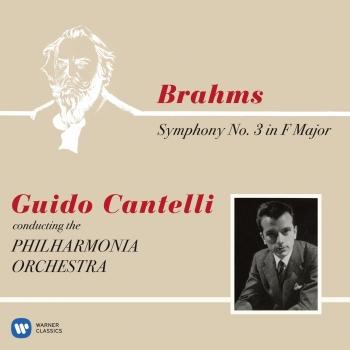 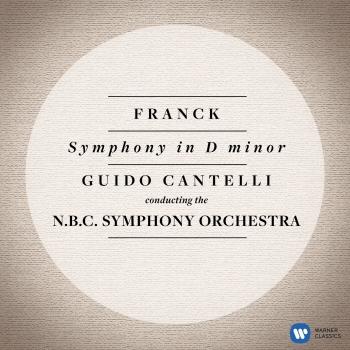 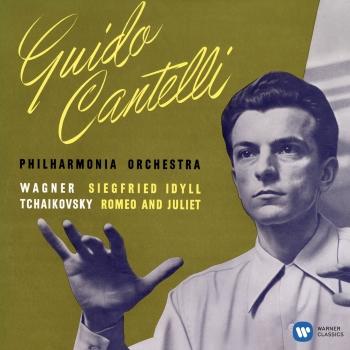 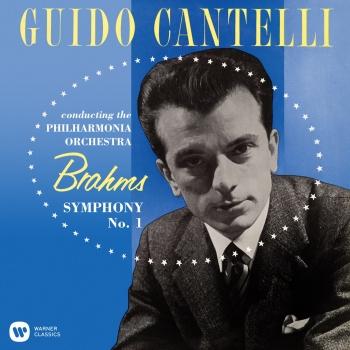 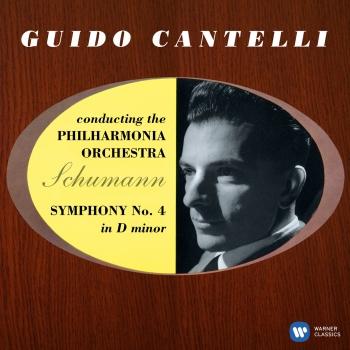 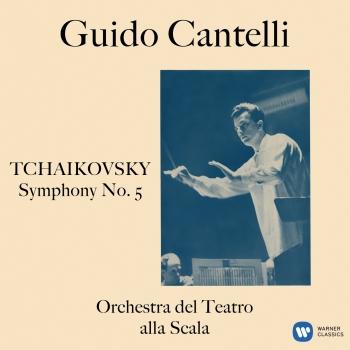 Guido Cantelli
Cantelli’s father was a bandmaster in the Italian army and as a boy Guido was a member of his father’s military band. He also played the organ in church, conducted a local choral society, and by the age of fourteen was giving piano recitals in public. At the Milan Conservatory he studied composition as well as conducting and made his first professional appearance as a conductor directing Verdi’s La traviata in Novara at the Teatro Coccia, which had been founded by Toscanini in 1899. During World War II he was initially a member of the Italian army, but for his refusal to fight on the side of Fascism he was imprisoned in a labour camp on the Baltic coast. He escaped using forged papers and eventually returned to Novara where he worked as a bank clerk, possibly under a false name.
With the end of the war he quickly resumed his interrupted conducting career, securing work with the orchestra of La Scala both in Milan and on tour. Both the music director and the intendant of La Scala, Victor de Sabata and Antonio Ghiringhelli, recognised his talent and supported him. Toscanini heard Cantelli for the first time in 1948, conducting the orchestra of La Scala in a rehearsal for a concert. He saw in him a reflection of what he took to have been his own conducting style at Cantelli’s age, and immediately invited him to conduct the NBC Symphony Orchestra in New York. Cantelli appeared with the orchestra for the first time during January 1949 and was recording with it a mere two months later.
With Toscanini’s active support and his obviously exceptional talents as a conductor, Cantelli immediately shot to the top of the conducting tree. He appeared in America every year up to his death, with the New York Philharmonic, Boston Symphony and NBC Symphony Orchestras. Together with de Sabata he appeared with the La Scala Orchestra at the Edinburgh Festival in 1950, and shortly after took over from an indisposed de Sabata a concert with this orchestra in London. He was quickly signed up by Walter Legge to record with the Philharmonia Orchestra, and in 1951 started to make the first of many distinguished recordings for EMI. In addition to a busy schedule of concerts and recordings in America, Italy and Great Britain, Cantelli conducted at major festivals such as those of Lucerne and Salzburg. At the time of his unfortunate death in an aeroplane crash at Orly airport he had just been appointed as chief conductor at La Scala, following a scintillating production of Mozart’s Così fan tutte at the Piccola Scala, and was being actively considered as a successor to Dimitri Mitropoulos as the chief conductor of the New York Philharmonic.
Although in Cantelli’s conducting Toscanini saw himself as a young musician, Cantelli was musically too strong an individual to be simply a reflection of the maestro. Like Toscanini he emphasized fidelity to the score com’è scritto (as written) in terms of tempo and detail, and he had no time for the subjectivity that was common during his lifetime; however in addition Cantelli brought to his performances a sense of musical taste, a sensitivity of balance, and a tonal beauty that had been less emphasised by both Toscanini and Furtwängler in their own respective searches for textural fidelity and emotional truth. In this respect Cantelli was more a beginning than an end.
He was a meticulous and tireless rehearser. The New York Philharmonic Orchestra, typically tough, gave him little leeway until he stabbed his left palm with his baton during a rehearsal of Hindemith’s Mathis der Maler Symphony. The wound began to bleed but Cantelli carried on regardless until John Corigliano, the leader of the orchestra, jumped up to help the suddenly ailing maestro. Cantelli would not call off the rehearsal, and after his hand had been treated and bandaged, he continued. Only then did the orchestra give him its undivided and wholehearted attention. In his desire for perfection he could insist upon numerous takes in the recording studio of passages that the orchestra already knew well, and his frustration at not being able to achieve his ideal could result in occasional outbursts of anger. Yet as an individual he was modest and retiring.
His recorded legacy consists of many fine studio recordings and numerous ‘off-air’ recordings of studio performances and concert relays. For EMI he recorded with the Philharmonia Orchestra outstanding accounts of Beethoven’s Symphony No. 7, Brahms’s Symphonies Nos 1 and 3, Schumann’s Symphony No. 4 and Tchaikovsky’s Symphony No. 6, as well as atmospheric performances of music by Debussy and Ravel. He collaborated with the NBC Symphony Orchestra in fine accounts of Hindemith’s Mathis der Maler Symphony, Mussorgsky’s Pictures at an Exhibition and Franck’s Symphony. Regrettably his only studio performance with the New York Philharmonic Orchestra was of Vivaldi’s Le quattro stagione. Of particular interest are the many recordings of broadcasts given by Cantelli with the NBC Symphony and New York Philharmonic Orchestras, which have been extensively reissued; as has an unofficial recording of Mozart’s Così fan tutte from Milan.