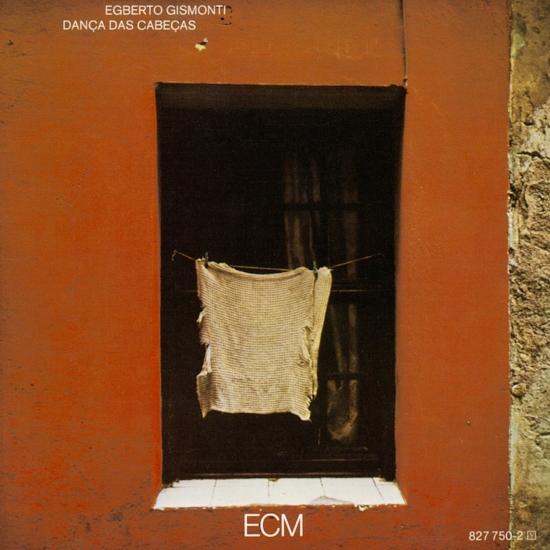 Egberto Gismonti’s first ECM appearance is also his most understated. Dança das Cabeças (Dance of the Heads) was to be a solo album, due to the fact that the Brazilian government had inflated travel expenses for he and his band to the questionable figure of 7000 dollars a head. Gismonti was the only among them able to make the journey, but as fate would have it, he met Nana Vasconcelos quite by accident while in Norway to prepare for this recording. According to Alvaro Neder, when Vasconcelos asked him to describe the concept behind this project, Gismonti told him it was “the history of two boys wandering through a dense, humid forest, full of insects and animals, keeping a 180-feet distance from each other.” It was a history the two musicians shared without articulation, and Vasconcelos immediately agreed to join, thereby bringing another visionary into the label’s fold.
“It sounds just like a rain forest!” Perhaps you have heard this assessment being made in reference to many a New-Age album, sporting lush trees on its cover and layered within with preprogrammed synthesizers and wooden flutes. Dança, by contrast, is as far as one can get from the contrived exotica that haunt our commercial soundscapes. We are fully situated in the acoustic benefits of live musicianship, captured in all their immediacy in ECM’s standard-setting clarity. And so, while the birdlike sounds of Part I do indeed evoke a forest practically dripping with fecundity, it is populated with more than a few brightly colored animals. Like Marion Brown’s Afternoon Of A Georgia Faun, its sound is as deliberate as it is organic. From these canopied beginnings, we get some jangly strums from Gismonti’s guitar, slaloming between frenzied hand drums. Rhythms and melodies build to infectious heights, diving into our blood with every fluted moment. The musicians raise their cries, from which Gismonti spins a free-flowing grace, as if to trace lines of varying distance in a vast topographic map. Vasconcelos returns in all his fullness with drums, maracas, and shakers, while Gismonti’s fingers move on in their quiet persistence. Changes in syncopation and a few helpings of dissonant harmonies enact a skeleton dance of sorts, soaring resolutely into the music’s ritual heart. Gismonti’s classical training shines through in Part II, for which he puts his fingers to keys in a spacious and revelatory stroll through Keith Jarrett territory. From this heartwarming nostalgia, built in arcs with only the occasional angles, Gismonti morphs into a bellowed vocalise and storm of handclaps. He returns to the guitar before closing with another pianistic statement in improvised space.
This remains the Brazilian multi-instrumentalist’s most direct effort. In it, we find him without masks. It is the kind of music that makes one glad to be alive, a breath of clarity in polluted air. Essential for anyone who appreciates what music can bring to the heart, mind, and body.
Egberto Gismonti, 8-string guitar, piano, wood flutes, voice
Nana Vasconcelos, percussion, berimbau, corpo, voice
Recorded November 1976 at Talent Studio, Oslo
Engineer: Jan Erik Kongshaug
Produced by Manfred Eicher
Digitally remastered 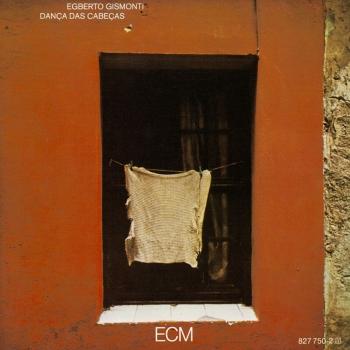