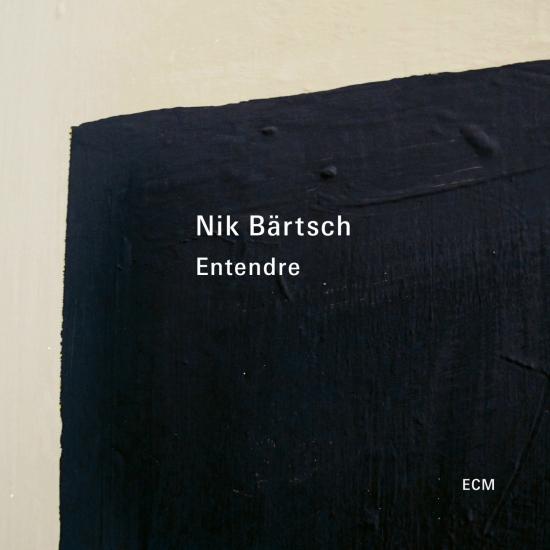 A fascinating solo album from the Swiss pianist, composer and conceptualist, Entendre offers deeper insight into Nik Bärtsch’s musical thinking, illuminating aspects of his playing and the nature of his modular pieces.
As its titles implies the new album, recorded at Lugano’s Auditorio Stelio Molo studio, considers listening as a dynamic process. In these solo realizations, Bärtsch’s polymetric pieces unfold with heightened alertness to the subtleties of touch. The pianist finds freedom in aesthetic restriction, while also seizing opportunities to guide the music to new places. An adaptive as well as a highly original musician, he diligently serves the context at hand, and the solo work has been developing in parallel to his group activities over the last few years. For Nik, some key moments in this regard have included his solo appearance at ECM’s 50th anniversary celebration at New York’s Lincoln Center in 2019, as well as performances in ongoing collaboration with visual artist Sophie Clements. A solo piano tour in 2017, furthermore, whose unorthodox itinerary took him to Teheran, Cairo, Alexandria, Kolkata and Delhi, had also prompted rumination on the intertwined relationships of solo performance and ritual music in different cultures. This, too, influenced the preparatory work on Entendre.
Nik’s numbered “Modul” pieces can be considered as templates rather than fixed and final compositions: he likens them to “a basic training in martial arts, which can be adapted to all sorts of situations. My way of working is to create new contexts. Each piece plays with the idea of composition, interpretation and improvisation, and is nourished by the same force, yet can create very surprising results…”
This is immediately evident on the opening “Modul 58-12” which unites pieces previously interpreted on recordings with Nik’s bands – “Modul 58” with Ronin on Awase, and “Modul 12” with Mobile on Continuum – to emotionally powerful effect. “It just developed in that direction in the studio. I didn’t plan it or expect it to open up in that way. The combination of these two pieces is maybe not a coincidence but more of an inner call. With a vivid celebration in the beginning, an opening flight that then goes to emptiness, stillness and breathing space.”
Patience, intense focus and lightness are among the contrary qualities necessary to play this music in “a dramaturgically directed way” and set its secrets free. In playing solo Bärtsch attempts, he says, “to let go and flow in the piece and transcend the egocentric way of forcing the music, finding a higher level of freedom in agreement with the form of the work.”
He also emphasizes that the solo music has been borne out of collaboration, including the long years of honing the music with Ronin and Mobile, and the teamwork of the session itself, with producer Manfred Eicher and engineer Stefano Amerio. “It was extremely helpful to have Manfred listening and giving advice about ways in which the pieces might be approached and interpreted. Hearing connections to Gurdjieff’s music in one piece, for example. Or suggesting that I play ‘Modul 26’ with the kind of flow that I’d found when playing 58. Such feedback helped to enlarge the whole listening experience in a very organic way.”
The responsive Lugano studio room – previously used also for Mobile’s Continuum recording – also asserted its character, Bärtsch says. “My touch in the solo music is not primarily a ‘jazz’ attack on the piano. It’s between things. Between chamber music, solo playing in the classical tradition, more modern minimal music, and the ‘groove’ aspect. And the natural reverberation, the natural sound, of the Lugano room helped to bring out these elements. I also felt inspired by the history of the room. And I really like the fact that it is here in Switzerland, in the country where I live and where Ronin works. I didn’t need to go anywhere else to document this music. It happens here.”
Entendre was recorded at Lugano’s Auditorio Stelio Molo RSI in September 2020, and produced by Manfred Eicher. The album is released as Lars Müller Publishers of Switzerland prepares to issue Nik Bärtsch’s book Listening: Music – Movement – Mind, which charts the development of Nik’s “ritual groove music” and the philosophy that underpins it.
Nik Bärtsch, piano