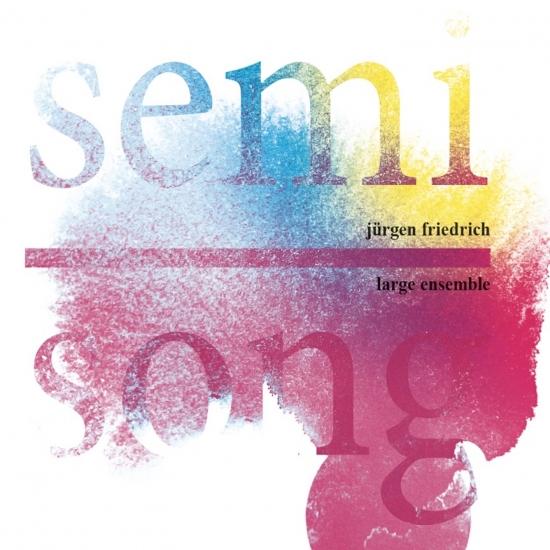 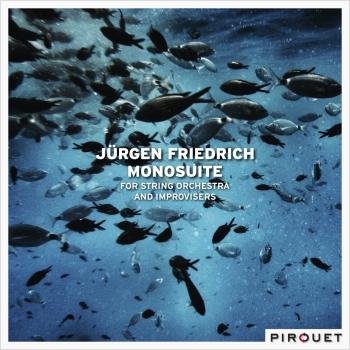 Monosuite for String Orchestra and Improvisers 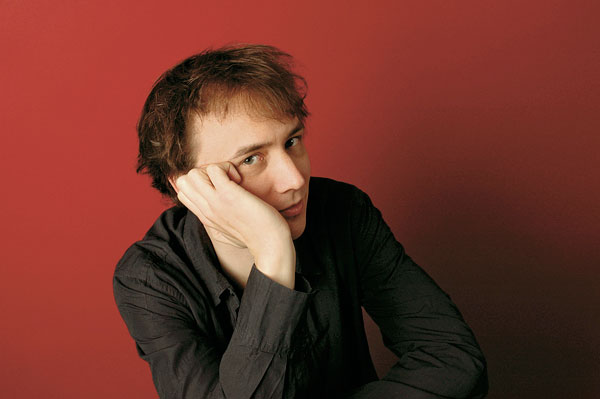 Jürgen Friedrich
was born in 1970 in Braunschweig, Germany, and grew up in the Northwestern German state of Lower Saxony. He currently lives in Cologne. Friedrich is known for his work as composer and leader of numerous groups, from small ensembles on through to large bands and orchestras. He studied piano and composition at the Cologne Music Conservatory. Friedrich recorded the first al- bum under his own name with trumpeter Kenny Wheeler as guest. His piano trio with bassist John Hébert und drummer Tony Moreno has played together on both sides of the Atlantic for over 15 years. The trio has recorded five CDs up until this point, including two for Pirouet, Seismo from 2006 and Pollock from 2009. Friedrich’s project Bits & Pieces combines interactive electronics and acoustic instruments employing composed and improvised music. Taking on the role of pianist and conductor with the Cologne Contemporary Jazz Orchestra (CCJO), Friedrich has presented a new pro- gram every month at the Cologne Stadtgarten over the last several years. Jürgen Friedrich is professor at the Mannheim University of Music where he is in charge of master studies in composition and arrangement. He has played with the likes of David Liebman, Kenny Wheeler, and Nils Wogram. Friedrich has worked as a composer, arranger, and conductor with the Sunday Night Orchestra, Maria Schneider Jazz Orchestra, NDR Big Band, HR Big Band, Bujazzo, the Würz- burg Philharmonic Orchestra, and guest artists Michael Brecker and Lee Konitz. He has played concerts throughout Europe, Brazil, the USA, and in various festivals, including Moers, Trytone Amsterdam, Copenhagen, Enjoy Jazz Mannheim, the Cologne Music Triennial, and the Prague Piano Festival. Friedrich has received various national and international awards. In 1997, he was the first European to win the prestigious Gil Evans Award for Jazz Composition. In 1998 and again in 2002 he won the Julius Hempill composition Award. In 2000 he won the city of Cologne’s Jazz/ Improvised Music Award, and in 2001 and 2005 he received Lower Saxony’s Jazz Prize.
Achim Kaufmann
Achim Kaufmann was born in 1962 in Aachen, Germany. After periods in Cologne and Amsterdam, he currently lives in Berlin. As one of the most important pianists in Europe, he is especially active in the intersection between jazz free-improvisation and New Music. Kaufmann’s lyrical play is enriched through his careful use of prepared pianos as well as through electronic distortions. Kaufmann has been active in the music scene since the 1980’s, and in 2001 was the winner of the SWR (South West Radio, Germany) Jazz Prize. Kaufmann has received broad recognition through his own duo, trio, and quartet projects, and work alongside such musicians as Tobias Delius, John Hollenbeck, Peggy Lee, Simon Nabatov, Jochen Rueckert, John Schröder, Henning Sieverts, Chris Speed, Tomász Stanko, and Steve Swallow. Kaufman is constantly touring, playing clubs, concerts, and major festivals with his band projects together with clarinetist and alto saxophonist Michael Moore in their Duo Kaufmann/Moore, in the Trio Kamosc (Achim Kaufmann, Michael Moore, Dylan van der Schyff), and in Gueuledeloup Quartet (Achim Kaufmann, Michael Moore, John Hollenbeck, Henning Sieverts), as well as with the trio Kaufmann/Gratkowski/de Joode. “Tonally, possibly the most daring German jazz pianist” (Frankfurter Allgemeine Newspaper), Kaufmann has recorded two trio CDs with Valdi Kolli and Jim Black on Pirouet, Kyrill (2008), and Verivyr (2011). bislang zwei CDs bei Pirouet.
John Hébert
John Hébert is originally from New Orleans, and currently lives in New York City. He is much in demand, and was named a “Rising Star on Acoustic Bass” bass three years in a row in Downbeat Magazine’s critic’s poll. He has worked with John Abercrombie, Paul Bley, Uri Caine, Marc Copland, Jürgen Friedrich, Mary Halvorson, Fred Hersch, Ingrid Laubrock, Lee Konitz, Paul Motian, Greg Osby, Maria Schneider, Bill Stewart, and Kenny Wheeler. Hébert and Tony Moreno have been part of Jürgen Friedrich’s trio for over fifteen years. Over this time they have recorded five al- bums together.
Hayden Chisholm
Hayden Chisholm was born in 1975 near Auckland, and raised in New Plymouth, New Zealand. Today he calls Cologne and Barcelona home. He has visited and studied cultures worldwide, and thereby perfected his ability to play microtones on the saxophone. He became well-known in the 1990’s, especially through his work with Nils Wogram’s Root 70. His debut album, Circe, was released in 1996. He plays with the action artist Rebecca Horn and the computer musician Marcus Schmickler, directs his own festival in the Cologne Loft, and has formed his own music label. Chisholm has also worked as saxophonist, clarinetist, and keyboard player on albums by Burnt Friedman, Jaki Liebezeit, David Sylvian and Sebastian Gramss’ Underkarl.
John Hollenbeck
John Hollenbeck calls both New York City and Berlin home. Through his experiences in jazz, world music, and modern compositions, he has developed a unique musical language that is both sophisticated and accessible. His impressive career encompasses not only various projects as drummer; he is also an accomplished composer and teaches drums and improvisation in Berlin. He has worked with the Village Vanguard Orchestra, Bob Brookmeyer, Meredith Monk, Cuong Vu and Pablo Ziegler. Hollenbeck has been awarded numerous prizes and fellowships, including the prestigious Guggenheim Fellowship. Hollenbeck’s own projects include the Claudia Quintet with Chris Speed, Matt Moran, Ted Reichman und Drew Gress, John Hollenbeck’s Large Ensemble, as well as an experimental duo with Singer Theo Bleckmann.