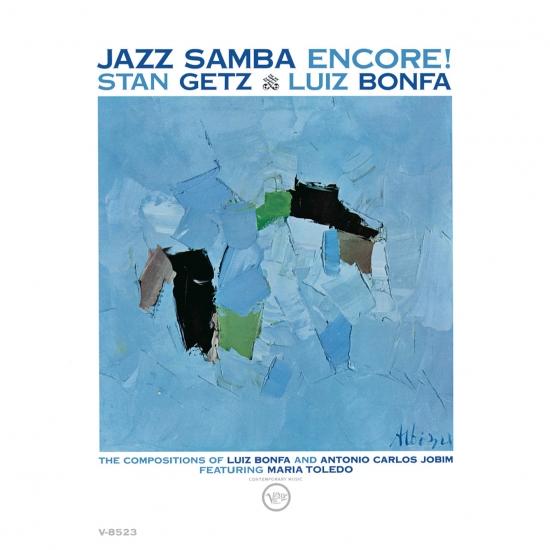 „Here's some more bossa nova from Stan Getz when the bloom was still on the first Brazilian boom. This time, however, on his third such album, Getz relies mostly upon native Brazilians for his backing. Thus, the soft-focused grooves are considerably more attuned to what was actually coming out of Brazil at the time. Two bona fide giants, Antonio Carlos Jobim and Luiz Bonfá (who gets co-billing), provide the guitars and all of the material, and Maria Toledo contributes an occasional throaty vocal. Getz injects more high-wailing passages into his intuitive affinity for the groove, even going for some fast bop on 'Un Abraco No Getz,' and Bonfá takes adept care of the guitar solos against Jobim's rock-steady rhythm. Clearly Jobim's songwriting contributions -- 'So Danco Samba,' 'How Insensitive,' and 'O Morro Nao Tem Vez' -- would have the longest shelf life, and though the album didn't sell as well as its two predecessors, it certainly helped break these tunes into the permanent jazz repertoire. Avid bossa nova fans will certainly treasure this album for the lesser-known Bonfá tunes.“ (Richard S. Ginell)
Stan Getz, tenor saxophone
Luiz Bonfa, guitar
Antonio Carlos Jobim, guitar
Maria Toledo, vocals
Don Payne, bass
George Duvivier, bass
Tommy Williams, bass
Dave Bailey, drums
Jose Carlos, drums
Paulo Ferreira, drums
Recorded February 8, 9 and 27, 1963 at Webster Hall, New York
Produced by Creed Taylor
Digitally remastered 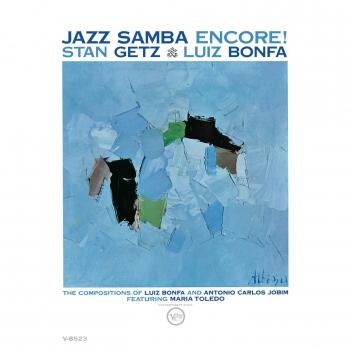 Luiz Bonfa
the son of an Italian immigrant, grew up in Rio and took up the guitar at 11. He studied with the Uruguayan guitarist Isaias Savio. In the late 1940's, he joined a vocal group called the Quitandinha Serenaders, named after the Quitandinha Hotel in Petropolis, a town near Rio. The group performed on Brazil's Radio Nacional in 1946 and was somewhat successful. But Mr. Bonfa quit the group in 1953 to work alone, mostly as a songwriter and guitarist. He was a delicate, fluent samba player, and in the mid-1950's was used extensively both as a musician and as a composer by Dick Farney, the Brazilian Sinatra-like crooner.
He was already well known in Brazil when he left for New York in 1957. Before his departure, Mr. Bonfa played guitar on the soundtrack recording for what would be „Black Orpheus.“ „Manha de Carnaval“ and „Samba de Orfeu“ were the two compositions he offered to the film's director, Marcel Camus. Better known to English-speakers as „A Day in the Life of a Fool“ and „Orpheus' Samba“ after the movie came out in 1959, they became some of the most widely recorded and performed Brazilian songs of the bossa nova era. The film's soundtrack also included work by Jobim and Vinicius da Moraes.
In New York Mr. Bonfa worked with Mary Martin, the Broadway singer, accompanying her on a solo tour. He returned to Brazil in 1959, when bossa nova was in its ascendancy. In 1962, Mr. Bonfa appeared at a historic bossa nova concert at Carnegie Hall, performing ''Manha de Carnaval,'' which was the best-known song of the evening. He stayed on in New York, living in hotels and returning to Brazil for a few months a year.
Mr. Bonfa lived in New York with his second wife, Maria Helena Toledo, performing and writing, often working in the late 1960's with the Brazilian keyboardist and composer Eumir Deodato, whose passage to New York was paid for by Mr. Bonfa. He wrote music for the soundtrack of the 1966 movie „The Gentle Rain,“ and built a reputation in the United States that was not equaled in his homeland.
Through the 60's and early 70's, he recorded a series of albums with the producer Creed Taylor, including „Bossa Nova“ (1962) and „Jazz Samba Encore“ (1963). His work for other producers included „The New Face of Luiz Bonfa“ (1970), the solo-guitar album „Introspection“ (1972) and „Jacaranda,“ an adventurous record with a jazz and Latin-music cast (1973).
He is survived by his third wife, Ruth de Oliveira, of Rio de Janeiro; a son, Luiz Novaes Bonfa, of Los Angeles; and three sisters.
Mr. Bonfa was less productive in the 70's, recording a few albums that were little known in the United States, among them „Manhattan Strut“ (1974), made with New York jazz session players, and „Bonfa Burrows Brazil“ (1984), made with the Australian saxophonist Don Burrows.
He had a short burst of renewed recognition in New York during the late 80's, playing a successful two-week run at Fat Tuesday's in 1987 and recording an album for Chesky, „Nonstop to Brazil“ in 1989, with a group that included the American jazz guitarist Gene Bertoncini. His last full album project was „The Bonfa Magic“ in 1991.