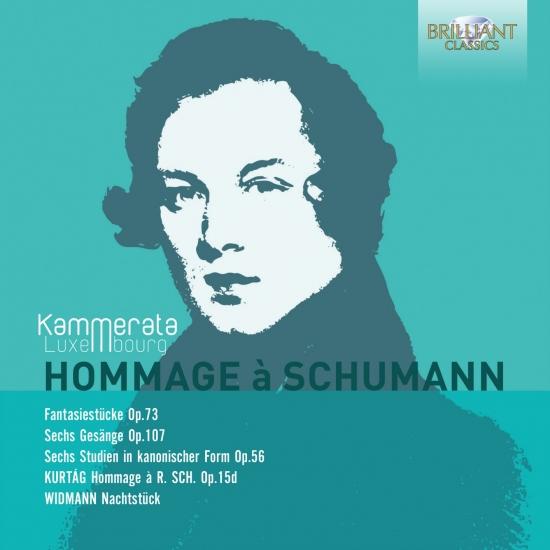 Founded in 1985, the Kammerata Luxembourg has established itself at the centre of the country’s musical life with new commissions, concert series and recordings, supported by its ministry of culture. One recent enterprising series was named ‘The European Union Enlarges’, focusing on the chamber music of future EU states, and others such as this album have constructed enlightening juxtapositions of modern and Romantic-era repertoire.
Few composers from the 19th century have exercised so potent an influence upon composers of our time as Robert Schumann. His abrupt changes of mood and intense, passionate commitment to individual expressive states have seized the imagination of many composers as well as listeners. Not the least of them is Schumann’s fellow German AribertReimann, In arranging the Fantasiestücke Op.73, Reimann altered not a note of the clarinet part while arranging the piano accompaniment for the unusual combination of flute, a harp and two violas, which enables him to explore both the sombre timbres and the more ethereal hues of the score.
The Op.107 songs are united by both a theme of unrequited love and a mood of wistful other-worldliness, which Reimann accentuates with an often-Expressionist recasting of the piano part for string quartet. The other original work here is the collection of canonic pieces originally written for a pedal piano and arranged by Schumann’s contemporary Theodor Kirchner. Meanwhile, the two contemporary responses to Schumann are undertaken in a spirit of the most sincere love and homage. Kurtág’s instrumentation for clarinet, viola and piano refers back to the Op.132 Märchenerzählungen – fairy tales – and he peppers his score with both literary allusions and references back to the object of his homage. Jörg Widmann likewise evokes Schumann’s Op.23 Nachtstücke in his own trio for clarinet, cello and piano. Anyone fearful of new music need not hesitate: Widmann insinuates himself into a world of Romantic melancholy with uncanny skill.
The creative genius of Robert Schumann, his unbridled, dreamlike fantasy and his close affinity to poetry and literature, has inspired many composers after him. This highly original program offers several works written as Hommage à Schumann: by György Kurtág (Hommage a R. Sch. for clarinet, viola and piano), Jörg Widmann (Nachtstück, for clarinet, cello and piano), as well as original works by Schumann himself, arranged for different ensembles by Aribert Reimann (Fantasiestücke Op. 73, for clarinet, flute, harp, two violas and 6 Gesänge Op. 107 for soprano and string quartet) and Theodor Kirchner (Sechs Studien, for violin, cello and piano).
Excellent performances by Kammerata Luxembourg, well known for its innovative programming. They recorded for Brilliant Classics works by Koechlin and Emmanuel. The booklet contains liner notes in both English and French.
Kammerata Luxembourg 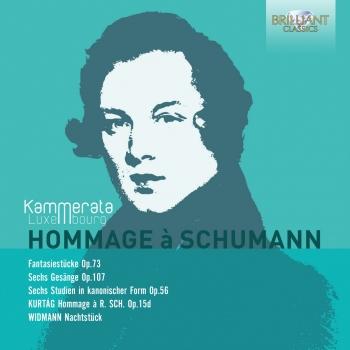