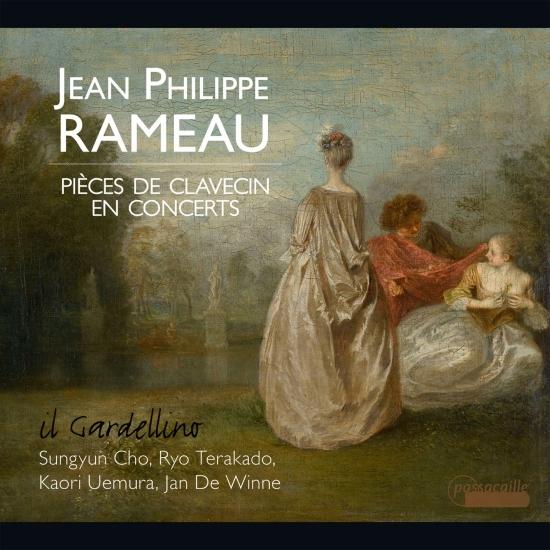 Jean Philippe Rameau, one of the most important French composers and music theorists of the Baroque era, published the "Pièces de clavecin en concerts" in 1741. This overall work is five concerts of chamber music, the only of its kind by Rameau. il Gardellino felt it was very important to keep the main role in the recordings to the harpsichord, played by Sungyun Cho. The musicans did, however, take some freedom of using the flute and violin together to create more colors and a beautiful orchestral effect.
Il Gardellino:
Jan De Winne, flute
Sunyun Cho, harpsichord
Kaori Uemura, viola da gamba
Ryo Terakado, violin 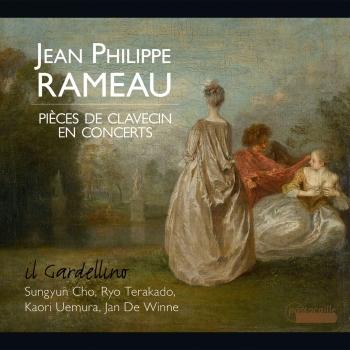 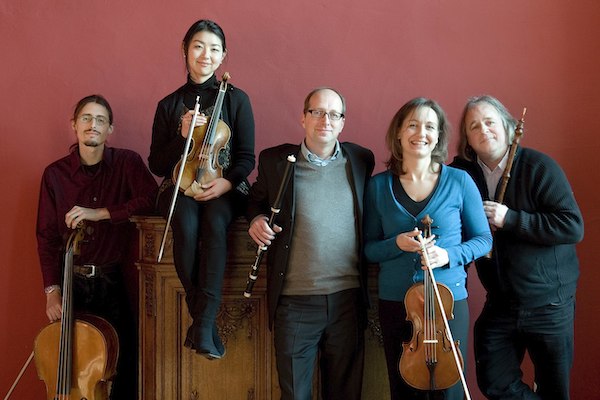 Il Gardellino
The ensemble takes its name from Vivaldi ’s musical portrait of a virtuoso goldfinch, the concerto da camera del Gardellino. Oboist Marcel Ponseele and flautist Jan De Winne initiated a series of concerts of chamber music in 1988; one other musician who took part at that time was bassoonist Marc Minkowski. After several years of performing chamber works, five string players joined the ensemble in 1998, with the result that a much wider repertoire was made available to the group. The stimulus and support offered by Belgian Radio Klara at that time also gave the ensemble the means to continue its growth. Thanks to the generous support of the Vlaamse Gemeenschap from the year 2000 onwards, Il Gardellino has become a permanent part of the musical landscape both in Belgium and abroad.
The ensemble’s repertoire and philosophy can be compared to an active volcano: it is continually recreated and renewed. Il Gardellino carries out thorough research into the historical background of the works it performs, so that each work that they perform, no matter from what period, will be presented according the performance style of the time for today’s audiences. Over many years of such work, Il Gardellino has created a sound world that is very much its own.
The ensemble’s admiration for the works of Johann Sebastian Bach has ensured that these compositions lie at the heart of their repertoire; Il Gardellino has nonetheless set itself the challenge of performing the works of composers who are unjustly lesser-known, as can be seen from their many recordings and concerts of the works of Eichner, Graun, Fasch, Janitsch, Stölzel and Heinichen. The ensemble prefers to perform in historic spaces, where the harmonic relationship between music and architecture creates its own dialogue with the audience.
The eight permanent members of the ensemble are joined by singers, extra winds and strings according to the requirements of the work being performed. The musicians are eminent specialists in historic performance practice and internationally renowned performers of baroque music: Marcel Ponseele (oboe), Jan De Winne (traverso), Ryo Terakado, Mayumi Hirasaki, Joanna Huszcza, François Fernandez (violin), Kaat De Cock and Ingrid Bourgeois (viola), Emmanuel Balssa, Ira Givol and Ronan Kernoa (cello), Vittorio Ghielmi (gamba), Alain Derijckere (bassoon), Frank Coppieters and Korneel Lecompte (double bass), Shalev Ad-El, Lorenzo Ghielmi and Bart Naessens (harpsichord). The ensemble also collaborates with well-known soloists as well as with other leading ensembles such as Cappella Amsterdam.
Il Gardellino is highly regarded both in national and international musical circles and is a frequent guest at important European music festivals and concert halls such as the MA Festival in Bruges, the Ghent Festival van Vlaanderen, the Festival Oude Muziek in Utrecht, the Festival de Sablé and Festival de Sainte as well as other festivals in Prague, Innsbruck, Berlin, Regensburg, Leipzig and Barcelona. The ensemble has also appeared in Australia, Asia, the USA, Central and South America, Israel and Russia. Their concert tours are often combined with series of master classes.
Il Gardellino possesses a comprehensive discography, having recorded for the Accent, Klara, Eufoda and Passacaille labels. These recordings have been acclaimed by both press and public; several of them have been awarded the Diapason d’Or and Classica by the international music press.