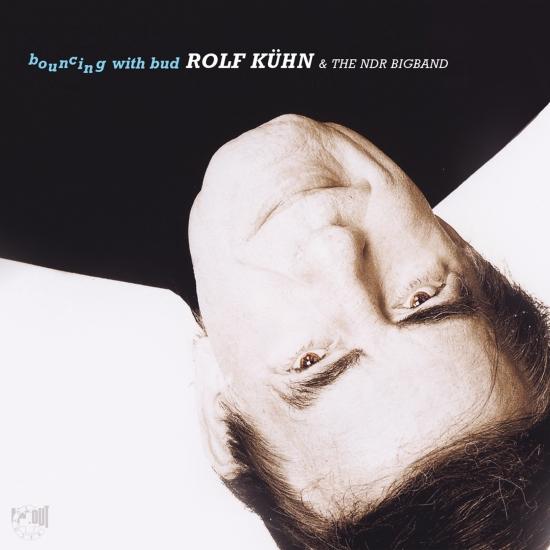 Info for Bouncing with Bud

In the late 1950s, when the young Rolf Kühn was leading the Benny Goodman Band and playing Goodman’s solos whenever the master was absent, the newcomer from Germany had a dream: To be fronting his own orchestra on clarinet and playing contemporary jazz. For Rolf was a generation younger that Goodman. He started his career as a teenager in the Kurt Henkels Orchestra in Leipzig with the title, “Rolly’s Be-Bop” – and this reflected his musical inclinations.
The claim that the big bands played no part in the development of modern jazz does not stand up. The contributions of the Dizzy Gillespie, Woody Herman and Stan Kenton orchestras, as well as those of the constantly experimenting German radio orchestras, provide ample proof of the falsity of this contention. And hardly anybody with ears thinks that the clarinet is a relic of the swing era. Rolf Kühn is just one of the four giants, next to Buddy DeFranco, Jimmy Giuffre and Eddie Daniels, who refute this assertion. Each one of them, in his very own way, moved Benny Goodman’s style forward. But it was decades before Rolf’s dream came true - with the NDR Big Band and guest soloists Roberto Di Gioia (p), Lennart Axelsson (tp) and Joe Gallardo. Bebop spoken here.
During endless bus rides, the musicians got on extremely well together. “A wonderful friendship developed,” says Rolf: “ Bud was a kind, almost child-like, charming man.” He was a divinely gifted musician who influenced bebop piano with his intricate rhythms, shimmering melodic phrases and eighth-note runs, just as his mentor, Thelonious Monk, did. A tragic hero, with a somewhat aggressive nature, who suffered depressions, panics, and paranoia and whose spirit had been broken by policemen and psychiatrists.
It began in 1945, when he was severely beaten about the head by police, following a minor drug offence. In the years up to 1959, he often spent more time in psychiatric clinics than at the piano. He was put in straitjackets and was given electric shock treatment. In between, he was improvising his brilliant choruses or was staring absent-mindedly into the audience. He found a certain stability in the years 1959-1964 in Paris, where he worked with Pierre Michelot (b) and Kenny Clarke (dr).
In 1964 Kühn saw and listened to him for the very last time at the “Montmartre” Jazz Club in Copenhagen. Two years later, Bud Powell was dead at the age of not quite 42 years. The eminent arrangers, Jörg Achim Keller and Barry Ross, created distinctive treatments of popular standards for the album and Chris Walden, who has scored the music for more than 30 Hollywood and TV movies, contributed three new originals. Rolf Kühn’s note of appreciation which appears on the album cover also applies to them. “Bouncing with Bud”.
To focus on the album’s title, Rolf engaged Bill Dobbins, who at the time was the director of the WDR Big Band, to arrange three numbers by bop genius Bud Powell, to whom this recording is dedicated. This goes back to Rolf Kühn’s memories of the beginning of his spell in the USA, when he was on a six-week tour of the east coast with the “Birdland All-Stars 57”, a group whose line- up would fill a whole festival these days: Chet Baker, Zoot Sims, Jimmy Jones, Roy Haynes, Sarah Vaughan, Billy Eckstine, Jeri Southern and the Basie Band. And, in addition to Rolf Kühn, the package included the Bud Powell Trio.
Rolf Kühn, clarinet
NDR Bigband