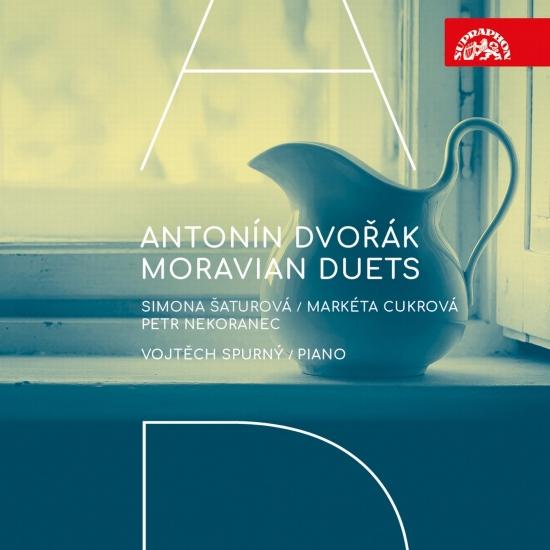 With support from the State Fund of Culture and the National Museum, Supraphon is releasing an extraordinary album of Antonín Dvořák’s Moravian Duets. The entire cycle of folk poetry settings has been recorded on the composer’s very own 1879 Bösendorfer piano, a precious item maintained at the Antonín Dvořák Museum in Prague. The album features internationally renowned young artists, all of them possessing a great sense for the grace of Dvořák’ songs, as well as the singular tone qualities of the instrument, once touched by the maestro himself. The soprano Simona Šaturová, the mezzo-soprano Markéta Cukrová and the tenor Petr Nekoranec were accompanied on Dvořák’s piano by Vojtěch Spurný. A Czech Television programme, produced by Jiří Hubač from BVA International, originated during the recording process. Supraphon is scheduled to release the new album of Moravian Duets on 20 April 2018, on CD and in digital formats.
Veronika Vejvodová, the Director of the Antonín Dvořák Museum in Prague, said of the new recording of Dvořák’s Moravian Duets: “We deem it to have been a unique opportunity to capture the current sound of Dvořák’s piano, which is part of our permanent exhibition and is not regularly played. What is more, the project’s having been undertaken by superlative artist and a prestigious label was a guarantee for the album’s high quality and the best way of presenting one of the rarest exhibits at our museum.”
The pianist Vojtěch Spurný added: “I consider absolutely crucial the fact that one of the recordings has been made on Dvořák’s very own piano. No modern, no matter how sophisticated, instrument could have rendered his music as cogently and naturally as does the historical Bösendorfer. Its sonic, tonal and articulatory faculties are ideal to meet the requirements of the score, which can be executed entirely in line with the notation. In addition, the performers are afforded sufficient scope for fleshing out their own imagination and detailing the interpretation in the spirit of Dvořák’s instruc­tions. And, of course, touching the actual keyboard on which Antonín Dvořák used to play is an experience so emotionally overwhelming that it is simply impossible to impart in words.”
The mezzo-soprano Markéta Cukrová said: “I must confess that the recording is a dream that I have had in my head for years. Simona Šaturová and I got together at the Styriarte festival in Graz, where we jointly sang some of Dvořák’s Moravian Duets. It was the very first time we had performed chamber music together, and I think both of us were happy to realise how well our voices fitted together.”
The soprano Simona Šaturová pointed out: “I felt a great joy when, without long prior discussions, Markéta Cukrová and I utterly and intuitively found accord. It was the result of chemistry between us, which does not always come naturally, and was fabulously completed by Vojtěch Spurný and Petr Nekoranec. I hope that our zest for music-making will also get across to the listeners. The atmosphere at the recording sessions was really pleasant, thanks to all those who participated in it.”
The tenor Petr Nekoranec said: “The recording of the Moravian Duets will always remain in my memory as something exceptional. Not only owing to my splendid colleagues, the recording team and Antonín Dvořák’s wonderful music, but also as my very first making of a recording! To be honest, I was surprised by how painstaking a process it actually is. And recording with Dvořák’s piano was an absolute sensation. The instrument’s sound is incredibly authentic and throughout the time I was thinking: Wow, this is how Rusalka must have sounded when Dvořák was composing the opera – it many even have been the instrument on which he first played its theme. A beautiful image indeed!”
Antonín Dvořák was inspired to write the Moravian Duets by Jan Neff, a wealthy Prague wholesale merchant, patriot and patron of the arts, for whose family he served as a piano teacher from 1873. Ardent music lovers, Josef and Marie Neff would often hold in their house small-scale concerts, at which they sang songs and duets, with Antonín Dvořák accompanying them on the piano. Neff suggested to Dvořák that he arrange for two voices and piano selected Moravian folk songs from the famous František Sušil collection. Initially, the composer agreed, yet later on he decided that instead of arranging the existing melodies he would only make use of the lyrics and set them anew. The Moravian Duets is among the most singular manifestations of Dvořák’s musical imagination, harbouring the exceptional traits of his idiom. Within the context of the composer’s career, the Moravian Duets occupies a special position, since the cycle’s success ushered in Dvořák’s inter­national renown and popularity.
"Saturova and Cukrova...bring native linguistic flair and “Slavonic” sound to these delightful miniatures, revealing Dvorak’s bounteous melodic gift in his early thirties. Delectable." (Sunday Times)
Simona Šaturová, soprano
Markéta Cukrová, mezzo-soprano
Petr Nekoranec, tenor
Vojtěch Spurný, piano